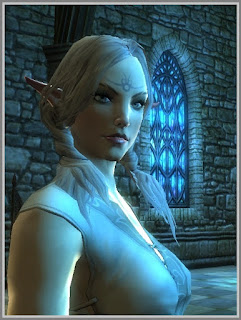 The Elves walked beside the gods in the youth of the world. Favored by Tavril, they were given long life, wisdom, and a special affinity for the land. In return for these gifts, the gods appointed them stewards of Telara, to watch over the wild places and defend all the beings that called Telara home. The Elves took to this task with natural elegance and focus and guarded Telara with faith, magic and skill for thousands of years. This was called the Covenant, and it became such a potent and pivotal feature in the lives of the High Elves, who lived and died by their sworn word to their goddess. They named the great forest that covered the majority of the world Tavra, in honor of their patron. Through the years, the world changed, becoming more civilized as mortal men were introduced into Telara, tribal creatures with short life spans who's barbaric nature and ignorant ways caused the Elves to feel sorry for them and teach them how to survive in the vast forests of Telara, raising the human tribes to look after nature, to worship the gods, and to follow the edicts that they, the Elves, set down. Of course, the humans, being short lived ambitious creatures, ventured out into the far reaches of the world, some scorning the teachings of the Elves and going their own way. They began to build towns and cities, to create tradeskills and militia. To experiment with the powerful material called Sourcestone.

When the Blood Storm invaded Telara, Crucia, the dragon of the Plane of Air, took particular interest in the High Elves. As the most beautiful and oldest and wisest of the creatures of Telara, she took personal offense to them. She summoned her armies and bade them destroy all the High Elves and their sacred groves. The savage and bloodthirsty Orcri went to war against the High Elves. Their Heart Grove, the seat of the High Elves' power and their council's meeting place, was systematically destroyed by the monstrous orcri. After the creatures were pushed back and defeated by the Elves, they moved their seat of power to Cliffside Vale. After the Blood Storm Wars, the Elves' numbers were vastly smaller.

Wardens of all life, the Elves were unprepared to pay the toll of duty. It wasn't the Blood Storm or any war with other sentient races that whittled their numbers down so much, but the many temptations of the world. First, the rebellious Kelari broke the Covenant, following their passions and ambitions to distant islands. Then, as the other mortal races advanced and built great cities, more and more Elves forsook their ancient duty and settled down in the various cities to lead easy, peaceful lives, teaching the men and women of the villages the ways of nature and magic.

Those Elves who remained true to their calling and their duty called themselves High Elves. They kept the Covenant and formed their home in Silverwood, sacred forest of Tavril herself. They wandered the forests and wild spaces of Telara, enforcing Telara's will with arrows and arcane spells, their deadly accuracy and cold commands granting them a reputation among the peoples of Telara. Secretive, keeping their agendas even from those they protected, the High Elves were often treated with suspicion and fear. They always took the long view of a situation and did not always work in the favor of the local citizens. Was the Elf there to save the farmers from the wolves or the wolves from the farmers? One could never tell when dealing with the High Elves.

When the Mathosian tyrant Aedraxis pledged himself to Regulos, the High Elves debated throwing in their limited numbers against the grotesque legions of the Endless Court that Aedraxis had summoned from the dead. The prince of the Elves, Hylas Aelfwar, argued against committing themselves to what was clearly a Mathosian problem. Shyla Starhearth, priestess of Tavril and Hylas's lover, disagreed, and made an impassioned plea to her people, imploring the Elves to take up arms against the mad king Aedraxis and the dire threat to Telara. She said that if he was not stopped, Aedraxis would bring ruin to Telara and all those that dwelled within it, even the High Elves in their sacred forest would not be safe. Most of the High Elves were moved by Shyla's words and agreed to join her in the fight against Aedraxis, but Hylas's royal house Aelfwar decided to stay out of the fight and safeguard Silverwood, citing that the Covenant was more important and needed to be followed to honor Tavril. 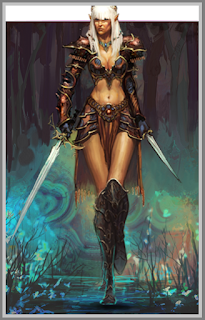 None of the elves who went into battle and fought beside Shyla and the Mathosians against Aedraxis survived when he performed the most unspeakable of acts, unleashing the rifts upon his homeland and his own people. The Ward was cracked and Regulos and the Blood Storm were again allowed to interact with Telara. After the battle had been ended, the messengers of the Vigil, winged heavenly beings, swooped down over the battlefield and resurrected Shyla and her people in reward for their sacrifices that day, giving them the gift of immortality and Ascendency. Shyla and the Ascended High Elves returned to Silverwood victorious after having stopped Aedraxis and the avatar of Regulos, reborn into the powerful warriors of the Vigil. They found that many of their kinsmen who had remained behind were different, changed. Loyal only to Prince Hylas. They acted wary, suspicious, even hostile to the returning elves, saying that they didn't believe they were actually Ascended and it could be a trick of the Blood Storm instead. Hylas was withdrawn, angry, volatile. He shut himself and his Aelfwar away in Overwatch Keep and would not allow anyone to sway him to the side of the newly created Guardians. And so another schism rent the Elves as the Aelfwar broke from the Covenant of the Vigil, wanting nothing to do with the Ascended and the Guardians.

When the rifts came again to Telara, Tavril joined with the other gods to create the collective known as the Vigil, ceasing to be a single god with a favored race. As a greater entity, the Vigil requires a stronger bond  with its followers and so forged a new Covenant with the Ascended High Elves. They pledged to rid the land of Regulos and the Blood Storm and deliver Telara from the darkness that was descending upon it and its innocent citizens. Now the High Elves are all but gone. The only remaining true High Elves are mostly Ascended, still following the ways of their beloved goddess but also now following the guidance of the Vigil. They venture all over Telara ensuring that the citizens of the world are safe as well as removing the taint of the cultists and the planar threats that seek to usurp nature's will upon the land.


References: So, the information I got for this post is no longer available on the interwebs, or least, not that I can find, and trust me, I looked! It's kind of disappointing that it isn't available anymore for other players to look at. Because of this, I had to guess at the culture part of the stats. I'm pretty sure, they are based on ancient Irish and Mayan people, but I'm not 100% sure, so if anyone has any more solid info or a link to a page that shows it, please I'd appreciate it! All the information contained here belongs to Trion Worlds and Rift and isn't mine, I'm just posting it here for informational purposes only! So don't shoot me k?