Asha Catari is a bit of a legend among the Defiant. She was one of the very first Ascended brought back from the Soulstream. She is the High General of the Defiant army and leads the Defiant forces against the rifts and cults. She can be found stationed in Meridian with her companion, a large troll. Asha has earned the title "Rift Walker", perhaps because of her run-in with Regulos after her death? She is Orphiel Farwind's trusted advisor and a good friend of Sylver Valis, although he'd like to deepen the relationship. Asha Catari once loved Prince Zareph Mathos deeply, as evidenced in the death chronicle.

During the time of the powerful Eth Empire, there were numerous city states, powered by wondrous magitech and technology. One such city state was Catari, ruled by the Catari family. They were a strong family of warriors, skilled in combat and skilled in the arts of technomancy. After the fall of the Eth Empire, the Catari line continued, unlike many of the other city states. Down through the ages, the Catari line produced some of the finest warriors the Eth had known. Asha Catari and her sister Aurum Catari were no exception. Both studied at the illustrious Quicksilver College to learn about their magical potential and hone their skills. But where Aurum was the head of her class, completing each task and class with exceeding excellence and top scores, Asha distinguished herself by rebelling against the system. She didn't agree with the methods of the school and the centuries-old way of testing. She questioned the teachers, was frustrated with her classes, and was often considered the mischief maker in class. She also befriended a rather notorious mage named Alsbeth, who had been taken in by the royal court out of pity and had also been sent to Quicksilver to study and learn. Eventually, in her third year at the college, Asha was expelled due to her behavior and her determination to study the arts of a Warlock-a forbidden area of study. Furious and disappointed in his daughter, the prominent Theo Catari-High Mage and representative of the southern tribes in the Mathosian Court- disowned Asha and cut her off from the rest of the family as punishment for her dishonor. Undeterred by this, Asha packed her bags went off on her own, exploring Telara as she saw fit.

She moved to the southern lands, visiting the vast desert of Shimmersand, where she became acquainted with and then accepted into the Dragonslayer Covenant. She was reckless, headstrong and determined, but quickly proved herself a capable warrior within the group, rising to the top with ease. Ten years later, Asha Catari was sent on a mission to warn Zareph Mathos of ties between his brother the king, Aedraxis Mathos and the evil Endless Court, said to follow Regulos. Once she realized what was actually going on in Mathosia, she stayed to help Prince Zareph fight his brother and defend Telara. When the Shade was unleashed, Asha Catari was slain. Her body can be found on the grounds of Thedeor Field to the left of the path that leads to the Death Rift.

When her spirit crossed over into the Soulstream, Regulos spotted it and noted her vast potential. He wanted her as one of his undead commanders for his war against Telara. He brought her soul before his form and infused her with much of his death magic, promising her that and more if she would join him in the destruction of Telara. Asha was horrified by his evil but never wavered in her steadfast loyalty to Telara. She refused Regulos's offer and he was furious. He gathered up the essence of death he'd instilled in her body, preparing to unleash it back on her as agonizing pain. But before he could, she was rescued, whisked away from the Soulstream and brought back to the world of the living, leaving Regulos to howl in frustrated fury. In shock, Asha gazed up at a longtime friend, one Orphiel Farwind, who explained to her that she had been resurrected by a machine designed to make Ascended. He told her his plans to make an army of powerful Ascended to fight back against the rifts and the cults and to protect Telara since the gods seemed to have lost interest in doing so. He asked her to be his second in command in this venture and to help him accomplish this goal. Asha agreed, although stated that it was mostly due to her desire for vengeance against Regulos and the Endless Court and together they founded the Defiants. Immediately, it was noticed that Asha had changed. She wasn't the brash, headstrong girl she used to be. She was now quiet, thoughtful and focused. She planned things carefully and was filled with a vengeance against Regulos and the Endless Court. She was also covered with strange glowing runes, the source of her newfound power, given to her by Regulos. 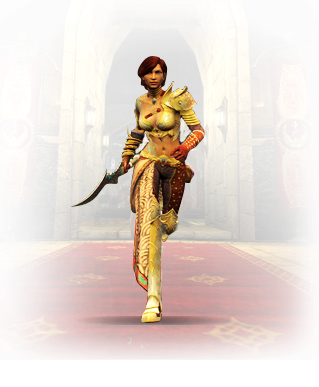 Unfortunately, Asha Catari was the only one of the first wave of resurrected warriors that had any potential for power. The others that were resurrected were ordinary, powerless human beings, although successfully resurrecting those who were dead was no small feat, Orphiel and Sylver were disappointed. Due to her infusion of death magic, Asha was incredibly strong and powerful. She was able to successfully wield the power of Regulos and use it against him when he confronted the last remaining Defiant forces in the end of days. She was able to hold him off, if even for a few brief seconds, allowing  the Ascended to slip through the Failsafe device and go back in time to prevent that future from happening. After the Ascended had gone back through the time machine, Regulos killed Asha and ravaged the rest of the land that had been rebelling against him. In that timeline, Telara was doomed. Thankfully, the Ascended were successful in their mission when going back in time and were able to prevent Regulos from gaining such a foothold on Telara again. Asha, being a valuable member of the Defiant faction, was given a prominent rank in Meridian, where she oversees the reports and missions that the rest of the faction undergo. You can find her in the Catari Command Center, on the right hand side when facing inward in Meridian in the Epoch Plaza. She stands next to Rhan Chuluun and Anthousa Mona and acts as a mediator between the two, who don't always get along very well. It's interesting that a large mountain troll named Murph also stands as her bodyguard behind her. When asked about him, Asha admits that she saved him from being attacked by much larger trolls in his tribe and he has attached himself to her ever since. She says that she's tried getting him to leave her, but he won't listen and now she is used to his presence. Sometimes, she ventures outside of the city to perform her own tasks, but prefers to leave the dirty work to the Faceless Man and his Unseen spies.

* Asha also played an important role in the fall of Port Scion, earning her prestige among many people; those except her friends and closest allies. Thus, she left with Orphiel Farwind to create the Defiant and start over in the city of Meridian. She fled the destruction of Meridian at the hands of the angry Guardians in the timeline that collapsed due to the events in the Defiant intro zone and the Ascended going back in time, and helped Sylver Valis continue his work on crafting Ascended.*

So many emotions filled me when Orphiel brought you back.
So many emotions I thought had gone completely.
Apparently time can only reduce the fires of live to embers,
but on sight they can be fanned to life again...
That is as far as the letter goes, as the quest implies that you, the Ascended, shouldn't be nosing into other people's personal affairs. When you turn in this letter to Asha she admits that she loved Zareph very much and only ever realized it until too late, although it is a painful reminder of who she was before the war began, and of what we are all fighting for. There is a very important reward for this quest as well. You gain the book "Asha Catari" to read and add to your collection of lore books.*﻿

References: The first half of this information was gathered from the in game book titled "Asha Catari" which can be obtained by a Defiant in Freemarch, as well as reading the old backstory Trion had on their old website about Asha which is gone now. The rest of it was stuff I learned from watching the events in Terminus and from talking to Asha and doing quests for her. The article I read about Asha in the dev journal mentioned that she'd been resurrected by Orphiel. She'd gone to help at Port Scion AFTER her resurrection. Which I guess means that after quitting the school, she'd eventually ended up slain at Thedeor Field on the side of the Guardians. She was dead for about 35-40 years, before being resurrected in the Defiant future as one of the first Defiant with the power of Ascendance, although it was immediately proved that she was the only one with that power and it actually came from Regulos instead. But if we go back in time to make sure the future didn't happen...wouldn't we be erasing the time where she was resurrected? Unless Orphiel resurrected her immediately after the Shade War, which I suppose could happen. Ugh, Rift lore is so confusing sometimes!
Posted by Darkwysper at 01:57