Occasionally among the Kelari there is born a child who cannot hear and bond with the native Spirits that share a home with the elves. This is a cause of great sorrow to the Kelari, for their entire culture centers around the powerful elemental spirits. They built two great temple-cities in order to honor and worship the Spirits in Atia and Nykantor. The name Nalthema is given to such pitiful children, who are often ridiculed and shunned as defective. Most Nalthema often fade from the public eye, and live out their miserable existence on the edge of society. 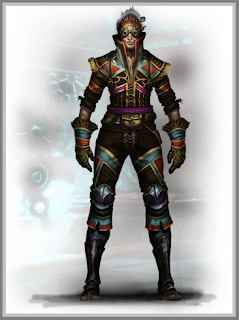 Sylver Valis was born a Nalthema. Instead of giving in to the despair of this affliction, he turned his brilliant mind to science and magitech instead. It was remarked that he was a quick child, able to read and write far earlier than most Kelari children, and had a quick mind, able to quickly understand and calculate magical theories that were far advanced for even most adult Kelari. Eventually, his skill with equations and magitech theories became known beyond the Isles and he was taken under the wing of one Orphiel Farwind, a prodigal Ethian scientist who was known for his radical views on sourcestone technology and his passion for the knowledge that the ancient Eth possessed. Orphiel Farwind tutored Sylver in the arts of technomancy and thermateurgy, allowing him access to the secrets of the Ethian Empire that he had unearthed. With their skill at planar manipulation and experimentation with sourcestone technology, they were able to establish amazing advances in sourcestone defense systems to protect Meridian, the base for their scientific work. In Meridian, the college of Planar Studies that had recently been taken from the Abyssal cult who controlled it, Sylver Valis was given the helm of a new revolutionary theory of creating machine-born humanoids that were beyond mortal, beyond the planes. These beings were given the title of Ascended. To mock the Guardian's Ascended, or because they rivaled the opposing faction's powers? Who knows.

The only person who knows more than Sylver about magitech and sourcestone technologies is Orphiel. In the alternate future timeline that has now ceased to be, Sylver was indeed successful in his endeavor of creating a magitech-forged being with the ability to "attune" to the planes, allowing access to incredibly and limitless potential as well as housing a special matrix that allowed the fitting of multiple souls inside for immortality, vast powers, and amazing regenerative ability. When these new Ascended beings came through Orphiel's time traveling device, Sylver was overjoyed that his experiments and theories proved successful in a future timeline, but he is now determined to do something just as great in this timeline to prove his excellence and worthiness of being a scientist. His current goal is to create a new type of Ascended that does not require the use of souls to power them. He often says that it is his ambition to create life, not merely return life from death. He finds his experiment and theory ambitious and exciting, despite the fact that more than half of his experiments end up exploding in his face and bringing the wrath of his superiors down on his head. Sylver is so driven by his discoveries and theories in Sourcestone technology that he often forgets about the goings-on of the outside world, much to the frustration of the Kelari High Priestess Anthousa Mona, who has become the unofficial leader of the Kelari survivors who fled from Ember isles. She takes every opportunity to belittle Sylver, insulting his Nalthema status and mocking his skill in magitech. But it was actually thanks to her harsh words one day that led to a new breakthrough for Sylver's technology. He came up with a new and improved way for Ascended to attune to the planar vibrations that cover Telara, allowing for them to gain a new understanding of the wild elements and master them like never before. In this special Attunement Ceremony, Sylver proudly displays his unique machine, which glows with multitudes of sourcestone and allows an Ascended to lock on to specific planes and gain new heights of planar prowess and focus.

Most days, Sylver can be found in the Planar Research section of Meridian, poring over various machines and gadgets with his loving and loyal assistant Staval Rosso. He is the foremost Eldritch Technician in Meridian and since Orphiel Farwind rarely communicates with visitors anymore, most enquiries about planar magic and technology are brought to Sylver Valis and his research team. He's very passionate about his chosen field and easily distracted by his experiments.
Sylver seems to have fallen in love with Asha Catari and at some point he even manages to beg an Ascended to present her with a mechanical rose of his own invention to prove his affections, which Asha politely and delicately turns down as she is still pining over her lost love, Zareph Mathos. Sylver admits it was a long shot, but as he is fond of saying, "no risk, no reward."
When a way was discovered for the Defiants to return to Ember Isle and reclaim it as their own, Sylver was one of the first to eagerly arrive back on his beloved homeland and staunchly defend it against the minions of Maelforge with his sourcestone knowledge.


References: Oh my ancestors, it's hard to actually find information on Sylver enough to piece together a proper piece on him. Of course everyone knows he created us Ascended, but other than that, there's not much known about him. I had to read every single chat window I could find around him in Terminus and Meridian, as well as the knowledge collectors and even ask the forums! This post is my own lore description of Sylver, written from my own research into his character. The character of course, belongs to Rift and Trion and is not mine! If I find more info on Sylver, I'll update this piece.