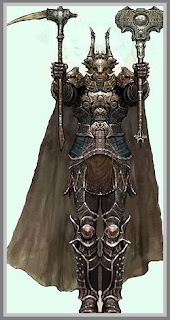 The March Wardens are an ancient order of protectors that defend Freemarch from tyrants, invaders, riftspawn and cultists. They were created after the fall of the Warlord Jakub, who had ruled the March with a cruel and unjust hand when the Ethian Empire collapsed. Jakub was a wandering marauder who found promise in the peace loving and beautiful land, fertile and ripe for the picking. Eventually, the people of the march grew restless and rebellious under his tyrannical rule and rose up against the Iron Tyrant, bravely fighting off his many followers and knights in a desperate bid to overthrow him. Eventually, Jakub was slain at his keep, the Iron Fortress, by a brave and righteous man named Eliam. After the battle, Freemarch refused to bend to anyone's rule again. Instead, they elected Eliam as their protector and guardian. And thus the March Wardens were created. Eliam, the first March Warden, became a legendary hero for decades to come. To honor him, and future leaders of the Wardens, a tome was carved out of the side of the mountains, a sacred burial site for the protectors of the march.

The March Wardens protected and cared for Freemarch down through the ages, surviving the rise and fall of the Mathosian Empire as well as the coming of the Shade. It wasn't until Alsbeth, under Regulos's orders, came to Freemarch to wreak havoc and perform profane deeds that the March Wardens reached out for aid. Alsbeth's undead army was swift and brutal, cutting off the Wardens from each other and their base. On top of Alsbeth and her Endless Court, the Abyssal Cult also became more active in the march, stirring up nightmarish trouble to the south by the docks. They were assaulted from all sides and the Guardians were far too busy with drastic matters of their own to lend reinforcements to the suffering Freemarch, so when the Defiants reached out to the March Wardens for an alliance, Warden Denegar, the 43rd elected March Warden of Freemarch, reluctantly allowed the heretics into their borders. The Defiants, in return for a base of operations and a city to perform their magitech, offered all the aid the Wardens required to beat back the cultists and riftspawn. Of course, not everyone was happy with this decision and many citizens of the march criticized, complained, and outright raged against the new Defiant occupation. Even now, years after the Defiant came to Freemarch and ousted the Abyssal from Meridian, the march inhabitants still mutter about them. The March Wardens still maintain independent rule of Freemarch, but now the Defiants have a say in military action, and have their own people stationed at all the March Warden outposts along the march's borders.

March Warden Denegar (follow the link for more info on him!)