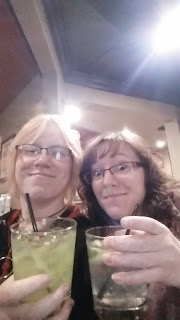 So, as always, BlizzCon was absolutely amazing. I can't even describe the feeling that comes over me when I finally arrive in Anahiem and can see all my friends from the game and the facebook pages and all my fellow cosplayers that I recognize and have followed and talked with over the year!! All the amazing creativity, the energy in the air! Already I'm sad and can't wait to go back next year! 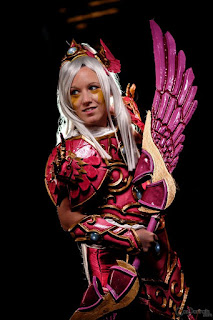 This year we flew down because the drive was just too long, although I'm not a fan of flying. We arrived a few days ahead of time, and went to some parties that our friends had going on! It was so much fun and I don't think I've ever smiled so much as I did there! We got our con badges and our "goodie bags" on Thursday and then my sis and I headed over to buy some WoW themed drinks at the Starbucks next door. It's so amazing because all the stores, restuarents, cafes, and other eateries around the area all welcomed BlizzCon goers! The staff all had these buttons on their shirts that said "We welcome BlizzCon Attendees" or something like that. It was pretty awesome. We got up early Friday morning, got our costumes on, and ran down to the convention center to enjoy the awesome that is BlizzCon!! There were so many things to do and experience. Unfortunately, there is a downside to dressing up and cosplaying. That is the fact that everyone and their dog wants your picture. lol! So literally my sister and I would walk a couple feet and then someone would ask to take our picture. This happened all day. But we did get to play demo for the new WoW expansion Legion, as well as play the demo for Overwatch again (Blizzard's new FPS game) and we got a free poster, some other neat loot, and even watched the trailer for the new Warcraft movie coming out next year. After watching the trailer, I was in such awe, it was like a shiver. It looks AMAZING omg! I can't wait for next year already!!!! Seriously can't wait. Since the movie comes out before next year's BC, I wonder if they will play the movie upstairs or something....I could see myself spending 2+ hours just rewatching it..... Hehe. 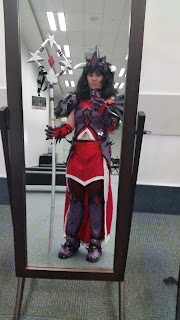 I've been so busy this past year, but I've been trying not to neglect Rift on top of all the other things I've been doing. I made 2 entire separate costumes for this year's con, which I'm quite amazed about. One was Masterskin of Tyrande Whisperwind from Blizzard's new game Heroes of the Storm. It's kind of like League of Legends except more awesome cause it's got WoW characters in it! Tyrande is one of my favorites on that game! Her and Illidan. So I made the pink version of her masterskin and it was so amazing and pretty and ugh! I am so proud of myself. I could have done better of course, and someday I will go back and redo that costume. But I was running out of time by the time I got to finishing up the last bits on both that I was actually still working on them in the hotel the night before haha! The other costume was an original redesign by me of Onyxia the Broodmother from WoW in her humanoid form. I made a battle armored version of her human form and I have to say, it turned out pretty awesome. The only thing that really bugs me and needs to change is the wig. I was so disappointed when I received the wig I ordered online because it was nothing at all like the picture, and it kind of threw my entire costume off in my opinion. I'm going to get a new wig for her at some point when I've recovered my funds from the trip and from the upcoming Xmas holidays. So, now that's all finished, here's some pictures from the con! 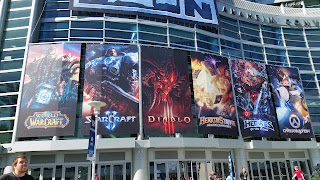 The picture on the left is the banner above the con and the one below is a picture of myself (right), my sister (left) and a friend of ours who did an awesome cosplay of Tauren rockstar from an in game rock band. 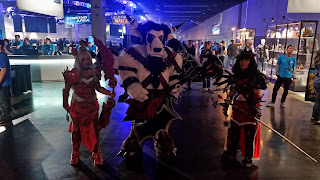