Cyril Kalmer is a living legend, a hero of times past. Even before the civil war between Prince Zareph and the traitor king Aedraxis, Cyril was known for his daring exploits in battle. Songs were sung of his steadfast courage, friendly disposition, and cheerful good humor. He is larger than life, taller than most, and is quite well known for his heavy white plate, ornately and meticulously designed in a Champion's colors. He was one of the first Ascended resurrected by the Vigil after the fall of Mathosia.

Cyril's origins are unknown. Stories suggest he is Mathosian, but others say Ethian. There is no definite proof of which land and which people he hailed from. It seems he sprung, fully grown, into the world of men. His exploits inspired and spurred hope into Mathosia's citizens. When Zareph declared war on Aedraxis, he could not sway the people of Mathosia to his side. They were loyal through and through to their king, and to the descendants of Mathos and believed that Aedraxis was the loyal king. When Zareph found himself besieged in Gloamwood at what is now called Shadefallen Keep, he was hard pressed to win the citizen's support in defending the keep against Aedraxis's onslaught. Watching from a safe distance, Aedraxis ordered the charge on the castle walls, thinking victory was at hand. But suddenly Cyril dashed out of the keep and attacked Aedraxis's "men" with fervor. Severing the head of one of the Knights in Aedraxis's employ, he deftly tossed the head back onto the battlements of the keep. The citizens and soldiers then realized that it wasn't the head of a man, but rather the rotting and grinning skull of an undead abomination. They knew than that Zareph was right and Aedraxis was a monster to be dethroned. And with a man like Cyril Kalmer fighting at Zareph's side, they knew he was in the right.

All of Mathosia rejoiced when it was announced that the Champion Cyril Kalmer was joining Prince Zareph on his crusade against King Aedraxis. They knew that with the famous general at his side, Zareph would surely topple the false king and restore peace and balance to the land.
Cyril Kalmer died in battle at Thedeor Field the day that Aedraxis summoned and subsequently unleashed the terrible Death Rift onto the field. Everyone died that day. The Vigil's messengers sought out his valiant spirit and brought it back to the land of the living, commanding him to lead the newly Ascended Guardians of Telara against Aedraxis and his undead army, forever putting a stop to his terrible reign. Cyril eagerly embraced this charge, and walked again among the living, becoming Prince Zareph's top general and leading the Mathosian army again against Aedraxis's unholy legion. Once Aedraxis and the avatar of Regulos was defeated, Cyril faithfully followed his Prince, now turned King, to Port Scion, where Zareph made it known that the city was scene of neutrality among the strained southern and northern tribes. Port Scion became a sanctuary for all races, where peace, trade, and commerce flourished. After Zareph's death, Cyril was enraged at the heretical and abominable Defiant, who he blamed for Zareph's downfall. He led an army against them, crossing the bridge Founder's Threshold on the hopes of destroying the new Defiant city of Meridian in Freemarch, but was unsuccessful in this time sequence. 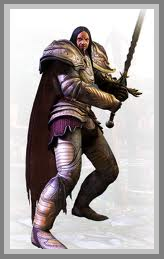 Cyril can now be found in Sanctum, where he stands steadfast as an icon and a leader to fellow Guardians everywhere, forever a representation of hope, courage, and watchfulness against the darkness and evil that would sweep Telara away. He is very vigilant and strong, commanding fellow Ascended into battle against the Blood Storm and the ungodly Defiant.


References: Most of this information was taken from the Rift website, because I've only been playing Guardian for so long and I don't really know much about the main Guardian NPC's. A few things I used my own theories on, based on the information I'd gathered from talking to him in the game and from the site. ﻿
Posted by Darkwysper at 18:05

Email ThisBlogThis!Share to TwitterShare to FacebookShare to Pinterest
Labels: Cyril