And here we come to the end of the first of Raeslyn's 'Tales of Telara'. I hope everyone who's read it enjoyed the story thus far, and I am quite proud to have actually kept it up too. I also learned a lot more about Role-play in general, and about Rift lore in particular while writing the blog! Of course, the story is far from over. After all, Rae has only begun her new journeys in Telara, and all them will be witnessed here! This entry is going to serve as a break between chapters, and as an easy to find index of the first chapter, with everything neatly arranged here for ease of access if I want to quickly check back to a particular lore excerpt or chapter piece.

Extras List:
Prologue
Upcoming Expansion
Patch 1.10
The Story Thus Far:
So, Raeslyn has been resurrected from death by the messengers of the Vigil, glorious winged beings who are apparently quite powerful. She awakens in the Sanctuary of Rebirth, shocked and confused to find herself alive again. According to the messengers and the other devout followers of the Vigil, Raeslyn, along with other Ascended, have been chosen to help fight back against the tyrant Aedraxis after being heroically slain. She has been given unparalleled powers, blessed to be the Vigil's chosen warrior in the fight against the Planes and the Blood Storm and the various other corruptions and evils in Telara. Raeslyn is sent out on a mission to help the beleaguered defenders of Mathosia fight off Aedraxis's undead minions and to prevent him from bringing untold evil and peril into the world by opening a death rift. Along the way she meets Shyla Starhearth, the High Priestess of the High Elves and an Ascended as well, and Borrin Gammult, a Dwarf from Lord's Hall. She learns that the Dwarves no longer have a home to return to and that most of them died in battle against Aedraxis. Borrin was also resurrected as an Ascended, along with Cyril Kalmer, a prominent and heroic figure from the Mathosian kingdom. He loyally fights by the side of Prince Zareph. There are various other notable figures that Raeslyn has the fortune to meet along her quest to destroy Aedraxis and his evil minions. One of these figures is Carwin Mathos, who unfortunately loses his life when Raeslyn arrives too late to stop Aedraxis from opening the death rift. Aedraxis is able to sunder the Ward, thus allowing the rift through, bringing with it foul, planar death magic. To give himself the ability to defeat the array of Ascended who have arrived to challenge him, Aedraxis calls upon Regulos the Destroyer to take his body as an avatar. Regulos quickly possesses the body and kills poor Carwin Mathos, and than attacks the rest of the group. Eventually, working together, Raeslyn, along with Shyla, Borrin and Cyril, are able to defeat the monster and close the rift. In order to prevent Regulos's spirit from finding a new host and a new way back onto Telara, Raeslyn took a mighty hammer and shattered the Shade of Regulos into dozens of pieces. Shortly after this, Raeslyn was suddenly pulled from Telara and brought somewhere else, where she was given a warning and a message by the Vigil...or was it the messenger speaking again? She isn't sure. Because of this message, Raeslyn now knows that the world of Telara is forever changed by the events she just witnessed. The Blood Storm will awaken, all that the newly created Guardians stood for will crumble, and darkness will sweep the land. She knows that she has to do what she can to prevent this from happening. Something to note is the fact that Raeslyn doesn't know where the broken shards of Regulos end up. If only she'd thought about that, or remembered it...


There's also some really interesting cameos by important characters to the story of Telara in the Mathosia zone! Here's a list of the ones I found.

**Before I go ahead with details about the tutorial zone, I'd like to post here that when I went through this area, it was quite a long time ago, before all the streamlined changes and tweaks that Trion changed. So of course if you play through this zone today, it will probably be a bit different. Just in case you're confused.**
Zone Details: 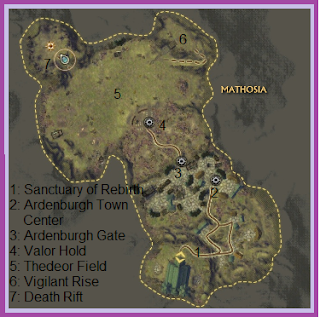 My Opinion of the Zone:
I really enjoyed questing through the Guardian starting zone. Religious fanatics and bloodthirsty warrior types aside, the zone runs rather smoothly and pushes you along at a fast pace. It also gives you a good understanding of where your character stands in Telara, and what role your supposed to play (save the world). It's a pretty small zone, but there's a lot of information and other interesting little oddities packed into it. It wasn't until I had run through the zone and then subsequently deleted my "Raeslyn's" when I didn't like them, to start over again, that I began to notice curious little items and clickable things that I hadn't noticed before! Like those sneaky, out of the way items that belong to the gods and when you click on them, give you a buff. Or the dead bodies that give you an extra bit of silver, or a green item if your lucky! Also, the trapped citizen that you have to save was really cool. And the books will definitely make a huge asset toward creating future lore articles in my blog. All in all, I give the Mathosia tutorial zone a 4/5. I had no problem with it!

Back to the Prologue
Chapter Two: Silverwood Summary 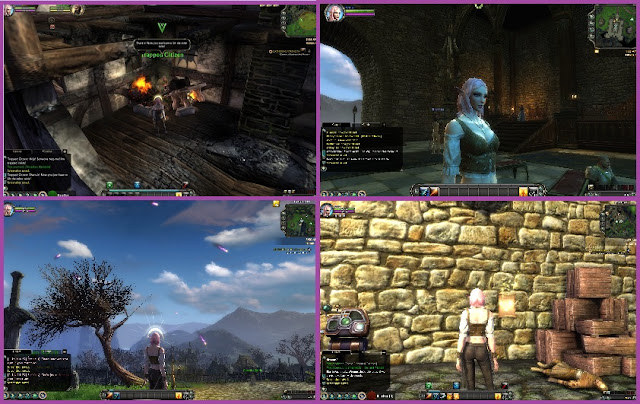