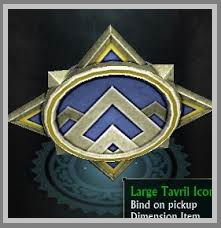 Tavril is the goddess of the land, one of the five gods who united to form what is known as the Vigil to protect Telara from the evil of the Blood Storm. By uniting their strengths and powers, they were able to erect and maintain the Ward, which kept the Planes from touching Telara's shores.
Tavril is the goddess of the land and of life. She protects Telara and tasks her children, the Elves, with safeguarding the wild and sacred spaces of the world. She embodies the power, the beauty, and the majesty of nature, of the natural world. Those who hold life sacred and follow the ways of nature find she can be bountiful, loving, and nurturing. For those who wish to destroy, spoil, or desecrate the land, she can become wrathful, vengeful, and destructive. Her presence can be found in most any natural place, particularly a forest. Silverwood, which was known as Elfhome and the Forest of Tavra at one point in history, is her most sacred forest and here her presence is most powerfully felt.
Being so connected to the land, Tavril is also the most vulnerable of the Vigil gods to the elemental destruction wrought by the Planes and the legions of creatures that pour through the Rifts. The elemental forces that are embodied in the planar Rifts tear apart her land, forging into something new that the Planar forces can survive in and mutating the natural order of the land to fit their own needs, but Tavril is a resilient goddess, like the land she represents, and with the help of the Ascended, the land will survive and prosper once again. The other gods protect her from the forces of the Planes and the Ascended heal her beautiful land each time they close a Rift. When a Rift is closed, it becomes immediately obvious that Tavril is there to eagerly claim back the blighted location for her own, healing Telara as soon as the elemental presence is lifted. Tavril is the manifestation of the land. She is the Land.
Before the Age of Dragons, Tavril  was the patron goddess of the Elves and walked the earth beside them, taking on physical form and living on Telara with the mortal races. Her beloved and favored children, the Elves, revered and loved her, doing all they could to please her. Thus, they swore the Covenant with her, vowing to uphold her laws and virtues and help to protect Telara from evil and chaos. This Covenant was agreed upon in an ancient holy spot in Silverwood known as the Mirror of Ages, where Tavril's physical manifestation swore the Elves to be Telara's protectors.
It is this close, two way relationship with the goddess that allows all Guardians a close connection to what is now the Vigil. The other gods of the Vigil work to protect Tavril, who is the most vulnerable of the five to elemental threat. But they also draw strength from her connection to the land. Tavril is the patron god of the High Elves who have walked with her in harmony since time began. The breaking of this covenant will herald the waking of the dragons, the coming of the Blood Storm and the prophecy of the end of times.
After the Ward was erected, Tavril's voice went silent, like the rest of the Vigil gods. Now the Messengers of the Vigil relay information from the Vigil to the Guardian Ascended. Perhaps the gods are trapped behind their own barrier, unable to enter Telara like they once did because the Ward keeps their powers out? Or maybe something happened to them and all that is left is a remnant, a faint taste of what the Vigil once was, and the Messengers, who have their orders to guide the Guardians no matter what. But you can still see her power at work. With every Rift that is sealed and every Planar stronghold that is destroyed, we witness the power of Tavril reasserting her will and healing the land.
When the first dwarf Ascended, Borrin Gammult, saw a majestic island rise out of the sea, after the disaster with the Shade of Regulos, he vowed to build a great basilica atop it in honor of Tavril and all the gods, taking it as a sign that his pilgrimage was over. In honor of the land, he named the central courtyard and the only viable entrance to the newly erected basilica Tavril Plaza.
References: It's so hard to find concrete information on the Vigil gods. Especially on specific gods as separate entities. Most of this information was from artifacts in the game, quest and talk bits, as well as several sites on the internet, all put together in my own words to form this article. Hopefully once I gain more information on Tavril, and the Vigil in general, I can come back and fill in. One thing I'd really like to get ahold of is a symbol or icon for Tavril. Surely the gods have their own symbol or figure they have to represent them to the mortal races?
Update: I finally found personal icons for the Vigil!! They are dimension objects, but work all the same and I'm very happy to finally get to see what their symbols are. Also, I was able to flesh out a bit more info on Tavril herself.
Posted by Darkwysper at 15:46