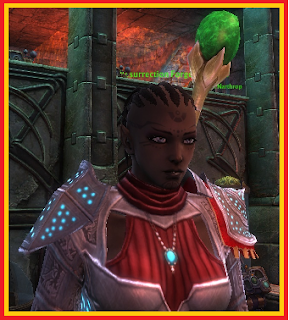 Well, here we are, a year later! Ok, so not a year exactly, but it's in the new year! I'm pretty excited to get this ball rolling on the Defiant side, can't you tell? :) For some time, as I've been writing Raeslyn's story, I was thinking boy, I'm missing out on a lot of interesting tidbits and cool things by only doing one half of the story. And I really like the Defiant faction as a people and their views on Sourcestone. But than I thought to myself...do I have the time to write two different stories on two different characters? And won't that get confusing, trying to keep their personalities separate and stuff? And what about questing in later content? I know that a lot of the zones merge, allowing both factions access to the same quests and locations. But then I thought meh! I'm gonna do it anyway! It's going to be fun and I'm just going to do what I want! It's my blog after all.

So here is my introductory page to the Defiant half of Telara. My new Defiant character, who I've chosen to make a Bahmi Mage, is going to be quite different from our lovely little sarcastic Rae. For one thing...she's not even who she appears to be! *le gasp* Kara isn't actually a Bahmi, despite in the body of one! Kara is actually the result of a mistake in the process of creating a new Ascended in the Life Factory. The intended dominant soul had been destroyed suddenly while still in the Lifestream mere seconds from being placed inside the Sourcestone matrix that housed the souls inside the body. So instead of the intended soul being matched with the vessel that best housed it, a Kelari named Karazhan Solanta. This leads poor Kara to being quite confused when first awakening. Eventually though, like all Kelari, she adapts to her new form and her new place in the world, coming to look forward to killing the cults and the bad guys that want to destroy it. Kara is respectful, quiet, thoughtful...basically the opposite of Rae. But she does have a stubborn streak if riled, and has learned the hard way to be ruthless if you want to succeed, so she has less hang ups over decisions that most people would find questionable or immoral. She is Defiant for a reason after all. She wholeheartedly embraces the semantics and philosophy of the Defiant, just believing the Vigil is just an excuse to not have to think for yourself. Of course, just like Rae, her views change as she journeys through the world and encounters many different things.

So my next entry on the blog will be Karazhan's first RP chapter, where we find her being reborn as a Defiant in the future, where it's apocalypse now! The system will be the same as before, but I will alternate between Kara and Rae each entry, divided by a Lore or Feature page, or whatever else I throw in there! When I get to a point where they are doing the same quests, I'll either have the two meet and pair up (an interesting and difficult endeavor to be sure!) Or alternate each girl for a zone. I haven't decided yet and we're a long ways off for that anyway. But I just thought I'd get this introductory letter out of the way before I went to bed for the night! I can't wait to dive into the Defiant story!

I hope you've enjoyed the journey so far and thank you for reading! PS, if you've gotten this far and recognize the name "Karazhan" from that "other game" then you would be right! Karazhan was my favorite raid of all time in World of Warcraft and I spent many a fond...and frustrating...hour with my guild mates during the BC expac. :)
Posted by Darkwysper at 14:09