[Lore] XIII: Lastlight and Terminus, the End of Days


Twenty years from the present day of Telara, the time we all know, is what is commonly known as the future Defiant timeline. This time is collapsed or erased when the Defiant Ascended go through the Failsafe, warning those in the present about the dangers and destruction of the future. By warning the leaders of the past, the Defiant Ascended than prevents the future end of the world timeline from happening, which seems paradoxical. In the future time, the world is all but destroyed, with only a last chunk of Telara left, where the remaining mortal races of Telara have banded together to form the order of Defiant (the name they took up upon being accused of treachery in the destruction of Port Scion), dedicated to bringing an end to the Blood Storm and to furthering their knowledge of magitech and technology. 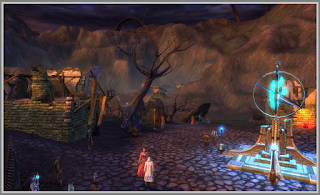 While the Guardian Ascended, after destroying Meridian in a fit of fanatical rage over the death of their beloved monarch, Prince Zareph, battle the newly awaked Blood Storm, the Defiant scientists and researchers work in secret to perfect the means of creating engineered Ascended of their own. By adapting and experimenting with magitech from the Ethian Empire of long ago, the Defiant scientists (following the directions left behind by their absent leader, Orphiel Farwind) were able to create chambers that could imbue a single body with multiple souls, giving that body increased speed, strength, stamina, and magic. This also makes the being immortal and quite powerful. Powerful enough to defeat Planar foes and even challenge the dragon gods themselves. The Guardians continued to lose ground to the ravaging armies of the Blood Storm and the Defiant stayed hidden in underground facilities across Telara, keeping in touch by way of magitech devices. Eventually, communication with the other facilities was lost and all that remained was the Terminus Life Factory. These last few feared that they were the only surviving people on Telara. They worked feverishly to perfect their machines, trying to find a way to create engineered Ascended before it was too late.


There were many trial and error Ascended. Most of the early creations, while successfully brought back from the dead, did not have the kind of power that the Guardian Ascended were legendary for. They had no increased abilities, no enhanced power. They were ordinary beings brought back from the dead. The only notable exception to this was the woman Asha Catari, whom Sylver loved. But they found out later that this wasn't due to Sylver's experiments but rather to a run in with Regulos that Asha survived due to luck and the timing of resurrection. She came back with the strange runes that Regulos burned into her skin to force her to work for him. No matter how much he tried, Sylver could not recreate this process.
Working past this failure, Sylver Valis finally succeeded in creating Defiant Ascended on the last day of Telara's existence. The world was literally on the brink of destruction, being torn apart bit by bit by the Destroyer. After he was successful, Sylver and the other scientists knew they had little time to get their newly created Ascended to Orphiel Farwind's Failsafe device and back to the past, before the events that led to the destruction of the world. This is after the fall of Port Scion but before the sacking and destruction of Meridian, which had been prevented by a twist of fate. (aka, the Defiant blew up the bridge between the two lands in the timeline we reside in now, instead of allowing the Guardians to march across it into Freemarch).
"After the fall of the Guardians, in the timeline that no longer exists, the remaining infrastructures of the former Empire of Mathosia crumbled. Refugees fled from one haven to the next until there were none left to turn to. Gangs of marauders formed alongside the rift invaders to take advantage of the chaos and soon only the strong and the lucky remained.
Some survived by banding together. One such group of survivors founded the town of Lastlight. They settled in the shelled buildings of a former settlement which had lost its name long ago when the last of the inhabitants had been slain. When we Defiant researchers at the Life Factory opened our doors to finally face what had happened to the world, we encountered a small community of half-starved and half-mad individuals clinging to the last of their humanity in the face of annihilation.
At first they were hostile to us, as they were only used to visitors looking to pillage and destroy, but we won their trust gradually. Their personal accounts of the end of days have motivated us to continue our work no matter what obstacles might stand in our way."
~Taken from the knowledge collector in game. By Sylver Valis.
The Defiant knew they wouldn't succeed in creating Ascended in time. Their research had been nearly destroyed by the Guardians. So they created a time anchor right outside of Meridian, in the Ark of the Ascended. Anyone sent through the anchor, the Failsafe, would end up at a fixed time and place. When they had finally crafted the perfect Ascended, they started sending as many as they could back through the time portal in the hopes of preventing this future from ever coming to pass. The very moment they activated the Failsafe, Regulos himself appeared, summoned through a massive death rift that opened up right over the device. As the last Ascended was sent through the portal, Regulos claimed the remaining vestige of Telara, destroying it completely. Thankfully, the Failsafe worked and the Ascended were sent back in time to warn the inhabitants of the past Telara about the coming apocalypse and to help prevent it from coming about. Thus, that threat was diverted, but more sprang up, and the Ascended work tirelessly to make sure that Telara remains free and safe from the clutches of the planes and their sinister denizens.


References: The paragraph in quotations is taken directly from the game, from a knocked over urn on the outskirts of Lastlight. The rest is a summary of the future events in my own words from my experience in the zone.