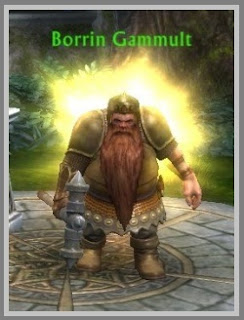 Borrin Gamult is the unofficial King of the Dwarves on Telara. He can be found primarily in the throne room of the Sanctum of the Vigil, in Sanctum, standing beside the great Cyril Kalmar and Shyla Starhearth. He helps run the city of Sanctum and co ordinates Guardian incursions into enemy territory.

Borrin was the erstwhile king of Lord's Hall (a dwarven city called a Delve located deep in Scarwood Reach) during the Mathosian Civil War. When he discovered that Aedraxis was using sourcestone technology to weaken the Ward, the dwarven king led his army to Mathosia to stop the tyrant. However, when Aedraxis used that same technology to unleash a massive death rift and cause planar creatures to be set upon Telara once again, Borrin and his army were slaughtered, unable to stand up to the strength and power of the Plane of Death. After this disastrous battle, the Vigil resurrected Borrin and many of his people alongside Cyril and Shyla. Borrin became Ascended and fought once again to defeat Aedraxis once and for all and prevent Telara from surrendering to the Shade of Regulos. Regulos was once again pushed back beyond the Ward.

Years later, Borrin received a vision from the gods of a majestic shining city of light rising out of the sea. Traveling to the coast of Silverwood, an island rose right before his eyes. He knew this would the location of the newly formed Guardians' city, the Sanctum, from where they could launch their crusade against the Planes and the Defiant, a group of heretics. Borrin became the master architect behind the construction of Sanctum. 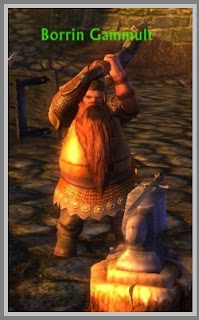 Borrin now resides within Holy Sanctum, the new capital of the Guardians, as the official leader of the surviving dwarven population. He helps their efforts to retake Telara from the dragon cults but also seeks to unite his people as the proud mighty race they once were.

As of a few years ago, when the seas finally calmed and it seemed that at last some stability returned to the land of Mathosia, Borrin and many of his loyal dwarves were determined to see how their people on Ember Isle fared since they had heard of the disaster that had befallen the distant islands. If you venture to Ember Isle yourself you can find Borrin there with his people, bravely defending Farhall against the onslaught of the many dangers of Ember Isle.

References: The information for Borrin is very easily gotten if you just talk to him, both in Ardenburgh and in his seat of power inside Sanctum. What he says gives you plenty of information on who he is and how he got there. Also, he admits to being Ascended. You can gain more information on Borrin, and on the dwarves as a whole by doing Scarwood Reach and Moonshade Highland quests, as well as running the Hammerknell chronicles! Enjoy! This information, and this character belongs to Trion, not me, by the way!
Posted by Darkwysper at 00:35