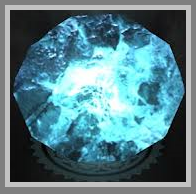 Sourcestone results when the Planes intersect with each other and with the physical material of Telara. It is believed that the reason Telara is so bountiful is because of its cosmological orientation on the intersection point of many Planes. Unfortunately, this also makes it a tempting target for the Blood Storm and other, more powerful foes, who's ravenous appetite for sourcestone is unquenchable. They would do anything, and have done many countless horrendous atrocities, to get it.

The Knowledge Collector, found in Terminus, states: "Sourcestone has been extensively studied by our technomancers but little has been discerned about its exact nature. Sourcestone in its most powerful form incorporates the six elements to create an 'ultimate' sourcestone. This sourcestone was used by the gods to craft Telara. Subjected to intense levels of Planar energy, sourcestone will become aligned to one element of another. Examples of such 'single flavor' sourcestone are often found in rifts."
Types of elemental sourcestone:
One theory related to sourcestone states that Telara is a planet which houses a node of pure sourcestone at its center, in the Nexus and Forge of Creation. By itself, this pure sourcestone is inert, impressionable. By itself it can't do anything, but when "touched" by a single element, becomes active and material. Where touched, say by a rift from a certain elemental plane, a field of corruption will spread outward from the contact site. The stronger the "touch", the further the planar corruption and influence spreads. When one element merely passes through or briefly interacts with the sourcestone, a more balanced reaction will occur.

Before the Blood Storm came, there was no use or need for a Ward to protect Telara from the influence of the Planes. It's been suggested in several books of history that all six elements were present and active on Telara in the dawn of time. Unfortunately, when the sentient races began experimenting with magitech and uses for sourcestone, they drew the eye of the dragon gods of the Blood Storm, who descended upon an unsuspecting Telara.
When chunks of sourcestone comes in contact with an element, it takes on the characteristics, composition and properties of that element, becoming "corrupted". It will stay this way until it can be touched by the other elements as well.
And the Elves say this on Sourcestone: "There is only sourcestone. That which does not touch sourcestone is not. Sourcestone shapes the shapeless, materializes the immaterial, expresses elemental energy as tangible places and things. At the Nexus of the elemental planes, the gods found a great mass of sourcestone, which they shaped into a world and named Telara. They gods shaped elemental energy against the sourcestone. Telara was made of 'pure' sourcestone. After it was formed, it became 'ultimate' sourcestone, the strongest and most powerful type of sourcestone, made up of all six elements.
The Defiant use sourcestone to power their technology. It is a tool they would gladly use to keep Telara safe.
The Guardians think of sourcestone as a divine and sacred artifact through which to commune with the Vigil.
Posted by Darkwysper at 23:33