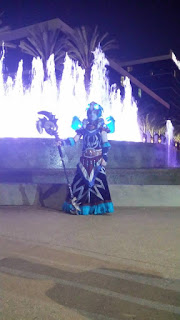 BlizzCon was such a monumental experience for me. I can't even properly put into words how much fun I had. It was my second time ever going to a convention (the first being the Edmonton Expo in September that was just a mix of culture stuff) so I wasn't sure what to expect. I was too chicken to participate in the costume contest, or any of the other contests offered by Blizzard, but I did end up in a contest as a spur of the moment thing. I wore my Druid T11 outfit, which I worked very hard on and was very proud of when finished. I won first place in that contest and received a free gaming laptop, which I now have hooked up to the 47" tv I got for Christmas from a good friend. My sister dressed up as a battle pet for the second day and I did as well. On the first day she just said she was my mini pet. It was such a chaos of rushing around seeing things and meeting people that the time passed far too quickly!

On the first day there, my sister, my boyfriend and I went to a cosplay dinner that was specifically for cosplayers. We met a lot of awesome and familiar faces from the BlizzCon facebook page. I regret not making a card with my facebook page and battle.net tag on it so people I met could remember me, but next time! And there will most assuredly be a next time! I wore my Druid T11 costume for the entire first day and was aching by the time I took it off though. Also, I wore contacts for like the first time ever, and it was very hard on my eyes. I wanted to claw them out after wearing them all day lol. But I got many admiring looks and soooo many offers of "may I take your picture??" that it wasn't even funny. In fact, I barely saw any of the con the first day because I kept getting stopped by people wanting to take my picture! I never got to do much of the demos, or any of the other fun stuff cause I was too busy posing all day! Next year I'm not going to put up with that either, darn it! Although it certainly helped my ego lol.

We drove, the 3 of us, down to LA from Alberta, through Montana, Utah, and Iowa. There might have been one more...Arizona maybe? But I can't remember. It was quite the interesting trip to make in November, which is winter time for the northern states and the part of Canada we were from. We had to go very slow for the first 1k miles. And in case anyone was curious, the entire trip was approx. 3.2k miles, a total of 30+ hours. We drove straight across and made it in...um...23 hours? We didn't stop except to refuel, grab snacks, or rest our legs. A lot of people called us crazy, and it was a bit rough, but hey it was cheap lol! And we didn't have to worry about security either! At least that was nice. Although I did get hassled on the way back into Canada because I didn't have a Canadian passport. I was the only one in the vehicle who was born in the US and they didn't like that lol. Oh well, too bad for them! I'm duel citizen so there! 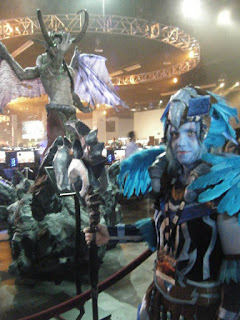 At the Blizzard shop, I got lots of epic loots. I bought a blue and gold Alliance bath towel that was very nice and big and fluffy. I'll never use it though lol! I'm going to hang it in the living room next to my computer and my other WoW stuff. I bought a PoP! Games mini Illidan. He was so darn cute, I just HAD to!!!! I bought a Chen Stormstout plushie. So cute and soft! We each got a mini collector's set of Blizzard game villains. 1 Kerrigan, 1 Diablo, and 1 Arthas. I wish it would have been Deathwing personally. I'm a huge fan of dragons and I think people obsess over Arthas a bit too much. WOTLK expac wasn't even that fun. I bought a set of 4 Warcraft drinking cups, all with different scenes depicted on them. I bought a Heroes of the Storm t-shirt, which somehow ended up going missing later...still really depressed about that. My sister bought the Warcraft Trivial Pursuit. She wanted the murloc plushie but he was all sold out sadly. She really likes them murlocs. I also bought a BlizzCon 2013 fridge magnet and an Alliance pin for my backpack. I collect pins as of last year lol....well to be technical, as of the Edmonton Expo I collect pins...

Also while there, we went to Disneyland for the day and than to Medieval Times. Both were so much fun, but alas we couldn't stay longer as that was our last day in LA. We were pretty sad to leave. The weather was soooooo nice and wonderful compared to our snow-covered home. We were wandering around outside in t-shirts and shorts while back home my coworkers were bundled up to the neck including hat, scarves, mittens. And it was so sunny and pretty every day! During the day the sun was so hot we couldn't stand to be in the direct sun for more than 5 minutes before melting into a puddle.

That's my BlizzCon experience in a nutshell! Things I'm going to do differently next year:
I sincerely enjoyed BlizzCon and recommend it to anyone who is a fan of cons, blizzard related or not. Although it is a bit pricey if you're not at least semi interested in a blizzard game! The funny thing is, I'm now rabidly into cosplay because of this and already have a ton of costume ideas running through my head based on my wow characters! I can't wait to get started on the next costume! See you next time!
~~Verhysa
Posted by Darkwysper at 10:34

Email ThisBlogThis!Share to TwitterShare to FacebookShare to Pinterest
Labels: BlizzCon, Off topic