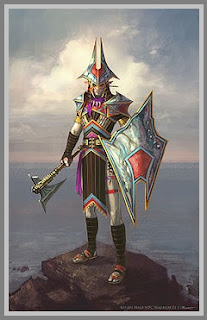 Within the dense jungles of the Kelari Isles, rebel elves carved sprawling magical cities from the limestone, bonding powerful spirits to every structure. They built great temples to appease this ever-expanding population of spirits and demi-gods and their cities expanded from the temples, mirroring the spiritual and natural phenomenon. Though Kelari settlements never matched the sophistication of the Eth city-states, they had their own spirit-crafted wonders and luxuries.
Once, all the elves were united as Tavril's chosen protectors, though some viewed their duties as more a burden than an honor. During the Age of Dragons, the elves who came to call themselves Kelari turned from Tavril, pursuing what they saw as spiritual equality. For years, they operated in secret among the High Elven society, forming pacts with powerful spirits and lesser gods. These cabals were finally exposed by their brethren and the bloody civil war that followed nearly decimated the entire elven population, which wasn't large to begin with. Finally, under a flag of truce, the High Priestess of their new order, Isidora, led her people away from the ancient elven homeland of Tavra to settle on a tropical archipelago.

Thanks to prolonged exposure with the spirits, the Kelari are both culturally and physically different from their High Elven cousins. They have generally darker skin tones, outlandishly colored hair, and notched ears. The Kelari are a proud race, believing themselves spiritually equal, rather then subservient to, the gods. They have no betters, only those who must prove themselves as equals. Steeped in elaborate and precise rituals, the Kelari seem detached and unconcerned for the mundane and a history of living sacrifice does not endear them to the other races of Telara. Until recently, Kelari interactions with outsiders were limited to the rare exchange of goods and scholarship.

The Kelari fled from the Isles after their society was corrupted from within. The Shade struck Telara and the deep-sea prison of Akylios cracked, driving the seas into a frenzy. Though monsoons and tidal waves battered the Isles, the Kelari held fast, protected by their spirit patrons. Then strange new spirits began appearing in the temples and some Kelari embraced their offers of unlimited power. One by one, the madness struck the priests and priestess of the Kelari people. As the elite of their society fell, the people rallied to drive out the new spirits. Yet they found many of their old spirit allies gone, and the new spirits were bloated with profane power that reeked of fire and brimstone. Soon, the Kelari found themselves struggling for their very survival on the Islands. Many Kelari joined the Abyssal cults, lured by their power, and soon the streets and temples ran red with elven blood. Finally High Priestess Anthousa Mona called for an exodus of the Isles and the remaining Kelari who agreed to leave sailed from their precious and beloved home. By then, the seas were nearly impassible and a mere score of ships made it to the shore of Freemarch. Only recently has the Kelari population seen growth, when the Defiant resurrection forges pulled a number of lost Kelari souls from their journey down the Soulstream, returning them to life as immortal Ascended.

The Kelari joined the Defiant mainly because they had no choice. Cast adrift from their home, on a strange continent, they had no allies and no resources. They approached the Defiant with an offer of alliance, as they would never join the Guardians and their Vigil worshipping allies. In truth, the Kelari favored no race and would rather avoid them all, but they saw the necessity of joining the Defiant faction. Many of the Defiant protested the Kelari's induction, in particular, the Bahmi, who never trusted the spirit-loving race. They were silenced, however, by the reminder that they followed a strict code that included an Oath of Hospitality. Evidence of this is provided by talking to Asha Catari, Rhan Chuluun, and Anthousa Mona in Meridian in the Command Center. Asha states that the Kelari's 'the end justifies the means' approach leaves some room for compassion, and their world views can sometimes be extreme.
The Kelari balance out the Defiants' eager lust for power with a fitting sort of spiritualism that was different, and yet similar, to that of the Guardians and their worship of the Vigil. While the Bahmi honed themselves to perfection to honor their ancestors and their clan and the Eth explored forbidden technology in order to defeat the many enemies of Telara, the Kelari eagerly made pacts with the mighty magical beings of the new continent they found themselves on, trading services for power and magical ability. The spiritual fervor that the Kelari displayed has easily been transferred into a passion for magitech among the young Kelari of the new generation, who have proven quite valuable in magitech workshops, despite the comments of older elves. I think this is mainly because on 'mainland', there are fewer Spirits, and fewer still Spirits who have the power to create a bond with a Kelari and aren't tainted by the planar energies. Of course, a Kelari is much more likely to simply try out what might work, rather then conduct careful, months-long experiments with precise measurements and much research, and so the Eth learned to grow somewhat cautious when their Elven allies handled their machinery. It was the Kelari's knowledge of spirits and spirit magic that led to the infusion of souls with machines in order to move forward with their plans of creating Defiant Ascended and it was a Kelari in particular, who was finally successful in creating the first machineborn Ascended in order to send them back in time and avert the apocalypse of the future.
Kelari love to investigate new forms of magitech and eagerly rush into trying out new things, with little regard to the consequence.

The leadership of the Kelari is strongly matriarchal. On the Islands, the most important feature of their culture was of course, their relationship with the spirits. The Kelari would made deals and pacts with the spirits to do anything from lighting a fire to making a vehicle fly through the air and cross a ravine. In return, the Kelari would over sacrifices and elaborate rituals, as well as other offerings and even perform deeds requested by the spirits. These were performed in large temples where the spirits could rest and absorb the power given to them by the Kelari. The temples and the priesthood are central to the Kelari society, much as their spirit worship is. Though merchants, artisans, military leaders and other high ranking members of society wield their own type of power in certain situations, the High Priestess is in all ways the leader. She has the last say in any decision and her decrees are regarded as final. The leader of every town and city, as well as the ruler of their temple, is always the Arch-Priest or Priestess. Though history has known Kelari High Priests, most of those in power through the years have been women.
In order to celebrate their wonderful pacts with the spirits and many bonds they have formed with them, the Kelari host many festivals. They honor the spirits and also celebrate the otherworldly powers they live with. The largest festival by far, and the one most Kelari will always participate in, is the Masq of the Spirits, a large spiritual and special holiday where the Kelari dress as spirits and it is often said that the spirits come into the streets and dress as Kelari. There is rich and wonderful foods, plenty of rituals and dance, and much singing of praise for the spirits. More then one Kelari will tell of a heartbreaking story of falling completely in love with a mysterious stranger, only to have them disappear like magic when dawn broke the horizon, having been nothing but a spirit the entire time.

To not be able to see, hear, or interact with the spirits in any way, is a rare, but devastating condition that sometimes afflicts members of the Kelari race. Those that are struck with this condition are called Nalthema, and are often shunned by the rest of Kelari society, leading sad and broken lives on the outskirts of society. One such famous Nalthema is Sylver Valis, who focused his energies and strength of will toward other pursuits. Mainly, he focused on science and magitech, and eventually was able to successfully engineer the first Defiant Ascended in the distant future of a closed timeline that was diverted by said Ascended going back in time. 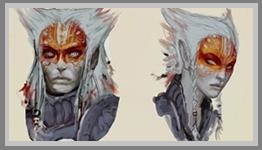 Stats:
Average Lifespan: 300 years
Culture: Mayan
Homeland: Ember Isles (known cities include Atia and Nykantor)
Leader: High Priestess Anthousa Mona
Spirituality: Spirit worship
Favored Mount: Horse and later, mechanical horse. (This is a hard one, because as jungle people, I'd say they'd ride the tiger mounts that are available through the shop, or the crocnards, but since those only became available later, I don't consider them canon mounts. Also it mentions that they ride in carriages that can fly, and since I don't see anything similar to that in game, except perhaps the flying disc things that were only recently introduced in 2015, horses will have to do until I can find some hard evidence!)


References: A lot of this information is taken from talking to Anthousa Mona in the Terminus introduction thing, as well as doing the spirit quest that was removed from the game at some point. More information is provided by talking to Asha, Anthousa Mona, and Rhan Chuluun in Meridian, where you can ask them set questions and they will give little paragraphs of backstory into each culture. Also, information was gleaned from the Rift forums in threads that I can no longer find, as well as the lore pages that Rift site used to have but no longer. The pictures are early concept art of Kelari. The information displayed in the "stats" paragraph was mostly just plugged in by me by paying attention to in game stuff. All except for the first 2 things, which I found through a Q&A session on a website! All this info does not belong to me! It belongs to Trion, who owns Rift, and I'm just writing it here for the benefit of Rift's players!
Posted by Darkwysper at 11:59