So, it's that time of the year yet again! Wow, time does fly by, does it not? It's crazy how it feels like just yesterday I was beginning to write this blog! And now it's Christmas. Or rather, Fae Yule! I've got my tree at home all decorated with shiny lights, I've got my stockings hung, and I've got holiday music playing in the background. Now it's time to settle down with some hot chocolate and write info on this year's Fae Yule!

It's rather exciting this year, mostly because I've got a bit of a handle on how the quests work now, and since I have more free time also this year, I can enjoy the festival instead of just logging in quickly here and there! Most of things are the same this year as they were in 2013, except for the introduction of some new quests, and of course, more and new achievements! I like that they update each year's things, because otherwise it would get boring for those who've already done it previously!

The two capital cities, Sanctum and Meridian, have gotten more snowy this year, and appear to be stuck in a winter wonderland. Which I very much like! It looks so pretty and snowy! There's also snow falling softly.

The currency for this year is Dark Icicles and Snowflakes, which you get from doing the quests and dailies and you can then turn them in for nifty rewards!

Fae Yule started on December 11th this year, and ends January 8th, so we have tons of time to do each of the phases, of which there are 3, as well as enjoy the holiday spirit in the game and out!

The 3 phases of Fae Yule are called:
If you log in to your character and want to do Fae Yule stuffs from Tempest Bay, just go up to the main area/plaza place and look for the mass of most players and/or where the wreaths and snow and holiday npc's are all located. If you click on one of the snow critters of your faction (they are specific to each faction, ya) it will magically whisk you away back to your home city, where you can then begin your snowy, wintery adventure!
If you're Guardian, the quests are all located by the steps in Sanctum, near the giant winged statues. If you are Defiant, the quests are located where all the holiday stuff is located, in that one little nook on the far side of the city, across from the warrior and training dummy area.

And you can use the portal in the faction cities to go to Iron Pine Peaks and do the sledding quests. I always liked these ones, they are pretty fun. Although I always miss the gates and end up shooting myself off the side of the mountain every time!

Annnnd, there's also Fae Yule Instant Adventures(IA)! Once you complete the little chain of IA's, a "Fae Yule Village" will appear with vendors and npc's who can sell neat holiday themed things for snowflakes and icicles. Also, after the IA's are over, you have a set amount of time, I'm not sure how much,  but definitely at least an hour, where you can find Fae Yule Artifacts. There's a bunch of artifact sets you can complete and you get an achievement for finishing them all. They don't look like normal shinies though, they look like adorable little gift boxes that you just clicky on! You can track them too just like normal artifacts! It's soooo fun!

As well as all that, there's also some kind of world boss during Fae Yule. I think it's called the Golden ...something or other. I don't remember. I only came across him at the last moment. He can be found in Dendrome, at Greenscale's Crater, and he drops some good loots. You get a minion card with his face on it, you get some dark icicles, and you get a whole buttloat of 'fragments of horror'.

There's also a really cool zone event that spawns sometimes called "There Arose Such a Clatter" that you can help complete in the zone and get cool holiday rewards from. Just like with other zone events, you have to do certain things before you can complete it. Like destroy rifts and rift creatures. After all that is done, a rift boss appears, but this time it's Fae Yule themed! Yulelegon is his name. He's a giant treant decked out in lights.

Another thing is lumps of coal, you can get from the zone events. You can take it to the brazier where Grandfather Winter keeps his hut and turn them for the event currency. 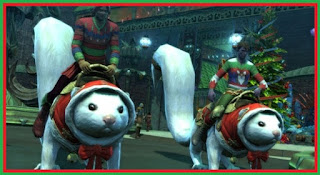 And, that about sums it up this year! Go out there, participate in Fae Yule, and HAVE FUN!!!!! Merry Christmas, Happy Fae Yule, and we'll see you in 2014 neh?