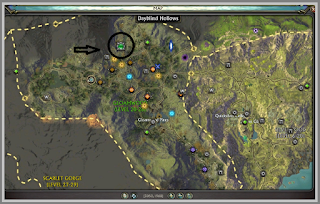 Dungeon Name: Darkening Deeps (DD)
Location: Gloamwood
Co ordinates: 5146, 2406
Bosses: Alchemist Braxtepel, Michael Bringhurts, Tegenar Deepfang, Gedlo Council (Incinerator Gerbik, Warlord Swedge, High Shaman Nuggo) There are additional bosses named Skarn and Glubmuk in Expert and Master modes of the dungeon.
Dungeon level: 21-28(*you can of course, mentor down or up to enter, but only if you are 15 or higher.*)
Length: Depending on your group's speed and skill at downing the bosses. A few of them in particular are pretty hard unless your group knows what they are doing or are overpowered. I'd say around 30-50 min.

In the deepest part of Gloamwood sits an ancient ruined Mathosian castle known as Shadefallen Keep. Beneath this castle, however, the dark caverns and dank canals are alive with the frenzy of riftspawn. The goblins have built a home for themselves into the cliffs here, their hovels lining a rocky path that descends deep into the bedrock of Telara. Daily, the goblin hoards crawl from the depths to attack and pillage the people of Gloamwood.
The people were barely able to keep back and contain the menace, until Fire Rifts spit out the Gedlo priests, who swiftly took control of the chaotic and mindless goblins, turning them into a brutal fighting force that even heavily armored Waykeepers had trouble dealing with. Always violent and savage creatures, the newfound attacks took a heavy toll on the people of Gloamwood. When goblin raiders spilled into Silverwood, burning and rampaging at will, cries for aid caused Prince Hylas to turn to new allies for aid against the threat. Now Darkening Deeps lays like a smoldering anthill, ready to burst open at the first hint of vulnerability.
Adventurers who brave the deeps will behold a vast underground chasm filled with the stench of fire and goblins. Goblins will mindlessly attack any venture within, spurred on by the magic of their Gedlo masters. Sadly, goblins aren't the only menace in the deep. Spiders from Silkweb Pass are rumored to nest in deep, forgotten chambers, luring unwary creatures to their deaths. And the ancient waterways that fill the cracks at the bottom of the city have been invaded by polluted water elementals, warped by the evil of the Gedlo.
Several villagers from the Pines have vanished after encounters with goblin war parties. Sometimes, on clear nights, one can hear their desperate cries, strangely mutating into the howling of wolves when the moon is full, though no wolves are known to live in Gloamwood. Even stranger, treants have become more scarce, and though locals care little for the invaders from the Plane of Life, their disappearance definitely created a stir. Some say it is connected to the goblin city.

From the report of Commander Oakheart, Paladin of the 8th Sanctuary Guard in Gloamwood:
"Three times we've stormed the den of those filthy goblin priests.
And three times we've been pushed back. By now my sword shows more blood
than steel, yet still we can't break through.
I have heard tales of villagers taken prisoner, offered as sacrifices in those halls
that we cannot breach. As we struggled there with the goblins,
I noticed ten long bloody scratches in the rock beneath our feet.
A loose human nail lay where one of the scratches ended.
These degenerates have never shown such ferocity as when defending these halls.
My stealthier comrades have seen goblins regard the chambers
with gleeful reverence, as if they hide a weapon of vast power and destruction.
Whatever they're hiding, whether or not we receive reinforcements,
the goblins have abducted my men, and I will not let them die
under a gedlo dagger!" 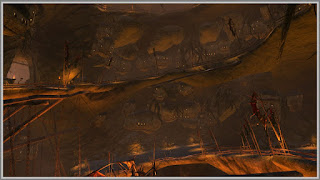 
References: The description for this dungeon is a summary of the story of DD as written by Trion on their old website when they had all the lore and info pages still. I've broken it down into my own words and rewritten here, but it still belongs to them and them only! All information is as accurate as I can get about the dungeon, but it's also from my own encounter with the dungeon, so there is some things missing. When I can enter Expert and Master mode, I will fill in the missing stats. All achievements are accurate as of 2016, as well as their requirements and rewards. Boss strategy is written with my own experiences in mind except for the higher difficulty bosses, who I've never encountered and instead have asked guild members about! Thank you, and this is Trion's work, not mine! :)