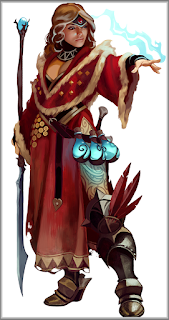 It was before the Age of Dragons that the initial magic users among the High Elves began to study and exploit weaknesses in the elemental forces, harnessing and redirecting them against invading forces. This dangerous art had dire consequences, since a loss of concentration by an elementalist (the first mages were elementalists) could end in immediate and painful death. Despite these risks, the elementalists were effective at turning the tide of the Blood Storm War. Their art kept them away from the front lines and their minions inflicted heavy losses on the planar hosts invading Telara. Today this arcane art still flourishes across Telara and remains a key factor in holding at bay the numerous enemies of our world.

Mages are the purest spellcasters. They do not entreat or bargain, or bow before Spirits and their patron gods to gain power and spells, although they may train and study for many years to learn the ability to summon weak-minded elemental beings from the planes to aid them in battle. They do not evoke or revere the holy light or wield their magic with righteousness as say a Cleric would. The cunning, strength, and agility that warriors and rogues possess hold no interest for Mages. They seek the purity of absolute elemental knowledge. Knowledge untainted by the glory of following an unknowable source, or the primal fury that drives their other magic-wielding brethren such as Clerics and Primalists. Mages don't bargain for their magic, or compel. They don't call upon a mighty spirit or ancestor to bless them in battle. They also spend much of their free time studying and seeking out further magical knowledge, which leaves them vulnerable in a fight that would rely on brute force or skill of a physical weapon. Magic is a tool, or a gift. A mage must never forget its fundamental nature.

Magic touches and is drawn from the elemental planes that surround Telara and it weakens the barriers that keep the material and the immaterial separate. It weakens the laws of reality, even for a moment, to bend such powerful forces to their will. Of course, all active combatants who study the art of war know some form of magical aid. Clerics use magic to heal and support allies, and even to distract powerful foes unto themselves in order for their allies to safely concentrate on bringing that enemy down. Rogues can call on planar magic to grace their blades with added strength and speed, or to allow them to sift through the pockets between reality, gifting some rogues with the ability to "blink" from place to place, or become invisible to the untrained eye, or to coat their weapons with devastating magical ointments. Warriors can spend years with a master to learn the art of controlling entropy and death magic, becoming what is called a Reaver, or can gain knowledge in the opposite direction and wield the holy power of a patron god or spirit as a Paladin. A primalist can call on the magical potential and fury of the natural world around them, drawing upon the very life and air that we breathe to devastate foes and heal allies. But none can master the elements and the arcane like a Mage can. If you want something blown up, get yourself a Saboteur. If you want a powerful healer to protect you in battle and cure any magical curse or illness, find a Cleric. If you need someone quietly assassinated in the dead of the night, try a Rogue. But if you want wide areas of devestation, powerful earth shattering spellwork and thunderous storms of ice, burning waves of fire, dancing lightning, or the darkest of dark magics performed, best to call a Mage.

The path of a mage is one which uses knowledge and magical skill to overcome reality itself. Mages learn the rules of reality so they can break them. They touch upon a power that doesn't care either way about morality, factions, good and evil and pays no attention to the laws that govern the univers (Multiverse?). To be a Mage is to impose personal will over the universal laws of nature. The more strong-willed the mage, the powerful their spells.
Mages cast their spells by using their trained magical knowledge and innate talent as well as experience The more experienced and well trained the mage, the more devastation they bring to the field. Most mages learn new spells by being taught the incantation and instruction by a more skilled master mage, or by reading and copying texts in spellbooks into their own spellbook. A master mage can potentially have the ability to create their own spell if they so desired, as their knowledge and skill of the properties of magic is quite extensive.

Mages can assemble a broad and versatile arsenal of spells. Many mages see themselves, not only as spellcasters, but as philosophers, inventors, scholars, and scientists. Many of the magitech researchers in Meridian are also accomplished mages and many of the scholars and seekers of ancient history are proficient in elemental magic.

A mage typically needs to rest and eat healthy food after casting spells. The more advanced the spell and the longer the mage has been casting, the more exhausted the mage will become. An Ascended mage gains more strength of body and mind as well as stamina due to their unique status, and magic drain doesn't affect them as strongly, but an Ascended mage can still exhaust themselves into a stupor if they draw on too much magic at a time. That would require a lot of magic casting though and an Ascended would recover quickly. They would be vulnerable to attack while weakened, however, and would be just as easily overcome as a mortal mage if attacked at this time, with the difference being an Ascended would be able to essentially cheat death and resurrect themselves without the need for a ritual or lengthy and risky resurrection spell. When the need calls for a certain spell to be cast, the mage will allow her thoughts to retreat and will focus completely on that spell and the trigger word(s) needed to cast it, and it might look like the mage is in a trance while casting. When she has the spell she requires in mind, she will say or motion the trigger. All words, ingredients, and motions must be exact and carried through or else the mage could potentially miscast, misfire, or cast an entirely different spell by accident. 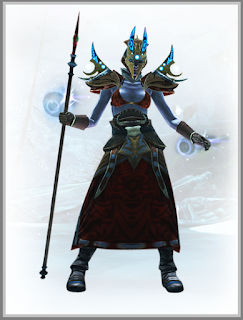 Mages can specialize in one or more of the 11 "schools" of magic:
Some of these schools of magic match better together then others and compliment and boost each other, whereas others are so opposite that a mage might find herself struggling with skill and learning while trying to juggle such contrasting specializations. While it is not easy to switch one's specialization, it is possible to learn a new school of magic, at the loss of the old one. There is only so much arcane knowledge a mage's natural font of magic can hold.

Often, mages are singled out and trained young, and in some cultures it is considered quite a privilege and honor to the family or household for a child to be chosen as an apprentice in the arcane. Karazhan is one such mage who was gifted to one of the many spirit temples in the illustrious city of Atia on the Ember Isles to study under a master mage. Most of the powerful and renowned mages come from the long lived races, as it takes many years to master and harness the energies of the Rifts and the raw elemental magics swirling throughout Telara, but it is not unheard of for a Mathosian or Eth to rise in the ranks, as their grasp of the arcane and elemental magic is quick and their ability to learn and study knowledge is outmatched.

References: I make no claim to any of this information! Rift mage info like the classes and the Planes all belong to the awesome Trion team! Details on magic, spellcasting, and battle info were taken from a World of Warcraft Roleplay website that I've forgotten the link to. But again, that does not belong to me either!
Posted by Darkwysper at 23:14