First off, a paragraph of ranting about my feelings on the new free to play model that Rift is adopting this patch! I must admit that when I first saw the email message on my phone all those days past that said Rift was going free-to-play, I was furious. Absolutely furious. I'm not sure why...perhaps I felt betrayed by Rift? Let down? Disapointed? I can't say for sure. But I remember taking one look at the email and than shutting my phone off. I remember thinking that's it, I've no more desire to play this game. Which was incredibly depressing because I love Rift. I cherish the game and everything about it. I've lived 2 years of my life surrounded by all things Rift, and I was sure in the fact that it would always be a sub based game. I even left WoW for Rift, which is a big thing for me, since I've been playing WoW straight since 2006. I get hooked into games very easily I'm afraid and WoW was the first MMO and RPG that I'd ever come across. GW happened to be the second and Rift was the third. I know, that's not much experience in the MMO world, but I don't care. I absolutely loved all 3 of those games, and of all of them, Rift was by far the most memorable. My favorite. So when I read the free to play announcement, I was so depressed and sad that I thought I'd uninstall Rift and reluctantly make my way back to being a full time WoW player. Half a week later, my sister finally convinced me to at least give the new version of Rift a chance. So I went to the website, read all the info I could, and than I ventured onto the forums, rightly guessing at all the nerdraging everyone else would be doing about the new model. And I was right. Every complaint I could have ever thought of and more was shouted out across the forums. After I'd read the announcement thread and all those thousands of complaints about the free to play model, I didn't feel so totally against the idea. I guess reading all those people whine and complain made me feel differently. Also, the new videos and screenshots seemed really interesting, and the promises the devs were making that Rift would essensially remain the same helped resolve some of my hurt feelings and here I am, ready to try the new free to play Rift! I well and truly hope that the game I know and love hasn't changed too drastically with their new plans for it, and I hope it will continue to grow and evolve into a fun and wonderful game! More fun than it already is, if that's possible!

That out of the way, here's the lowdown on what's going to be coming to Rift in patch 2.3!!!

For the new patch, a whole ton of things are changing. I'd rather not go through the ENTIRE list of changes, additions and modifications, so I'll just mention the things I'm most interested in.

Another nice touch is the addition of guides in the cities. Now in Meridian or Sanctum you can ask a guard for information on where a certain vendor or personage is. I've always liked that about WoW and I'm glad I can finally see fit to find my way around the cities easily without wandering for hours or asking the chat channels *shudders*. And now we can finally use Omen/Quantum sight in Storm Legion to find twisted artifacts, woot! I'm glad for the chance to find new shinies! 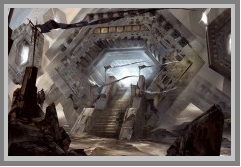 You can now preview mounts, mini pets, recipes, dimension items, etc before buying them! That's totally awesome! I'd love to be able to see what a mount or pet looks like before spending coin or currency on it! Awesome idea, I love it! Also, the patch says that the valmera and the eldritch steeds are no longer faction specific! That means that my Kelari can ride one of those awesome looking two-tailed cat mounts! I've always, ALWAYS wanted one, but I don't have a character on the Guardian side who's high enough. Now I don't have to worry about that!

Along with all this crazy amount of information and changes there's the usual stuff: soul nerfs and buffs, quest changes, currency changes, zone fixings, boss fight fixes, all the usual stuffs. Most of that stuff I just skim over at best, since I don't go in for the theorycrafting, math part of the game anyway. I just try the ability out and if I like how it works, great! If not, I'll try to refrain from using it unless a situation comes up that it could be useful in.