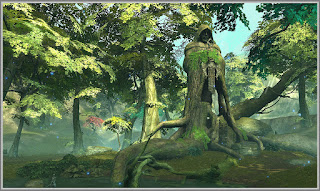 When the world of Telara had been created, Tavril the nature goddess, desired to have protectors and guardians of the sacred places, and to uphold her beliefs. She called the Elves of the world together in the forest of Tavra, in Silverwood. At the holy place now called the Mirror of Ages, she made with the Elves of the land a covenant. They would forever defend the untamed places of Telara in return for many gifts. Though the Elves kept to their cause through the age of prosperity, the Age of Dragons, and the chaos that came after, wandering to the far reaches of the world, they always kept Silverwood in their hearts as their home.
Silverwood remains mostly untouched by the defilement of the cultists and dragons through the years, mostly through the dedication of the High Elves who have watched over it, retreating back to their beloved wood when the world became a dangerous and unstable place. Their numbers dwindled but they held fast in Silverwood, keeping the promise they had made to the goddess. Silverwood is a beautiful and rich forest backed on one side by high mountains and the other side by the deep waters of the sea. It is strategically sound for the Guardians, which is one of the reasons it was chosen for their base of operations. It is home to all manner of wild creatures, including wolves, vespids, squirrels, rabbits, fish, shamblers and boglings. Many different races can be seen here, but the most predominant are the High Elves and their brethren who have made Silverwood their home. The trees are towering giants, hundreds of years old, and the forest is thick with powerful magic and wisdom.

Silverwood is home to the capital of the Guardians, Sanctum. It's the first "zone" that the Guardians are introduced to after their battle at Thedeor Field and fighting off Aedraxis and Regulos. Quicksilver College, the most prominent location for training and learning, is also located in Silverwood, and subjects such as history and culture are taught by prominent High Elves to many races. Many different types of magic are studied and taught at Quicksilver, as well as studies on nature and the Planes. Cyril Kalmar, the main leader of the Guardians, can usually be found in Sanctum. Silverwood is one of the most heavily defended of the zones on Telara for many reasons. It is the most frequented zone by players, it is always populated by those who are creating new characters, are starting over, or are new to the game, so there is always plenty of characters running around the wood. It also has a heavy Guardian presence, which means many more guards and soldiers than other zones, which are more loosely controlled and are constantly under attack from both the Planes and the Defiant. Silverwood is located directly opposite of Freemarch, the starting zone for the Defiant. It's easy to get from one zone to the other by swimming across the bay.
Another important location of note in Silverwood is the Mirror of Ages. This is found to the northwest of Quicksilver, closer to Gloamwood. The Mirror of Ages is a sacred place for all High Elves, and probably quite a few of the other Guardian races as well. In the center of the grove is a beautiful pool of water in its purest form. Out of the water rises an ancient petrified statue of the first prophet of Tavril. The Mirror of Ages and the statue have long been a place of peace and sanctuary for pilgrims and initiates of Tavril's ways. If one is worthy, one can even hear Tavril's response as whispers among the green canopies overhead. Unfortunately, because the Mirror of Ages is such a sacred place, it has recently become a target of House Aelfwar in their bid to take over Silverwood and topple the civilizations of man.

The main threat to Silverwood that you have to neutralize is House Aelfwar, led by the traitorous Prince Hylas Aelfwar, a High Elf who turned his back on Tavril and the Vigil and formed a pact with the dragon Greenscale. As you play through the story, you are given more information on both Hylas and his tragic love story with the High Priestess Shyla, who is one of the current leaders of the Guardians. You also gain a bit of information on why Hylas turned from the gods and how he was corrupted. Hylas would do anything to protect what he considers the last sacred bastion of nature on Telara, even going so far as to ally with the Fae and welcome them into the wood, outlawing the use of cold iron because Faeries hate it. Silverwood is also the home of a dungeon called "Realm of the Fae". This is the first dungeon that Guardian players come across in the game and is located physically in Silverwood in the North by the hedgerow mazes, inside an old well.

Silverwood is also on the border of the notorious and doomed city of Port Scion, which was one of the main points of contention between the Guardians and the Defiants and a place of extreme loss and tragedy. Port Scion is sealed and inaccessible to an adventurer, but you can stop at the edge of Silverwood to the West and see its high walls.

Even without the Aelfwar, Silverwood faces other threats. The goblins are pouring in by the dozens from the northern haunted forest of Gloamwood, being driven out of their native home by an unknown menace and attacking and destroying anything they can in Silverwood. Their leaders are bloodthirsty, violent and determined agents of the dragon of fire, Maelforge. 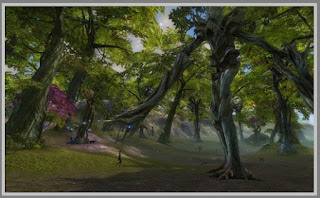 A note to Hylas from Twyl:

My dear Prince Hylas,
“Though you have called me enemy, the birds and beasts tell me of your woes. As a fellow guardian of the wild, my heart goes out to you. I too know the sting of a loved one’s betrayal. Your Priestess Shyla has always been too eager to spend her time with the Mathosians. Now she has returned from the dead and claimed this was the work of your gods, and yet… there is but one force I know that can animate the dead, and his name is Regulos.
We need not be enemies, O Prince. We share a common love of nature and the pristine wild, and a common loathing of the Guardians, who manage to blend the stink of death with the pomposity of religion. You remind me very much of the magnificent Fae— such as myself— who hail from the deepest parts of the Plane of Life. Even now, I have access to power that would save your beautiful Silverwood with ease. You need only ask.”
~~A kindred spirit, Twyl, Lord of the Fae
And here is a list of artifact sets that I found that relate to Silverwood or those that live here. I love finding little snippets of lore just by doing things like collecting artifacts or listening to the NPC's chat with each other!
References: Just my own thoughts on Silverwood. Most of this is my own words of the description given about Silverwood in the old lore pages they used to have on the Rift site before they took them down. I'm not sure where the information went, but I recorded it in my notebook a while ago. The last bit, the letter to Hylas, is not my work, but belongs to Trion. The information on the Mirror of Ages and the first prophet can be found by talking to Cerys Amare standing in front of the Inn in outside Quicksilver. The artifact sets are easy enough to find, by simply looking for the shiny little lights all over Silverwood. Of course, the artifacts are all random but I had collected a whole bagful and was able to sift through them to find those relevant to Silverwood!
Posted by Darkwysper at 03:03