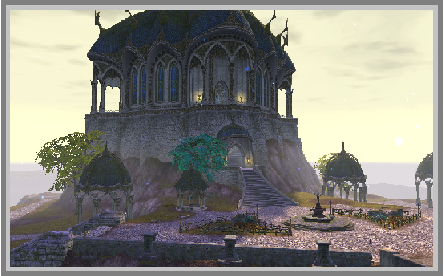 It is said that the island on which Sanctum is built was gifted to the Guardians by the Vigil, who gave Borrin Gammult a vision of a glorious island rising out of the oceans itself, a vast plateau on which to build a temple to the gods. And so he journeyed to Silverwood to construct such a basilica. It was called the Sanctum of the Vigil, and many ventured to the island to seek solace, peace and blessings from the gods. Eventually, it became such a central hub of Vigil worship that a city grew around the temple, becoming known simply as Sanctum, after the temple. Borrin Gammult earned the title Master Architect for his construction of the Sanctum and was revered by the Guardians. Now, Sanctum serves as the Guardians' headquarters and it is where Cyril spearheads the war efforts against the blood storm, their cultists and the heretical Defiant, with the assistance of Borrin Gammult and Shyla Starhearth, the new Pentarch of the Vigil. The main feature of the domed building is the Covenant of the Guardians, a massive and powerful ward that protects Sanctum against the evil power of the dragons. The Order of the Temple plans the attack against the Defiant while the Harmonious Crusade summon riftspawn for interrogation about the location and powers of the rifts. The Consecrators are the operatives who track down and hunt the cultists, relaying important information about their whereabouts and doings back to Sanctum so that Cyril Kalmer may plan his next move. The mezzanine above holds the quarters of the soul trainers and tutors and the Council of Cardinals co-ordinates efforts and missions with the many guilds that call Sanctum home, sending off heroes and Ascended alike into battle to train, purify and unify them.

Sanctum is divided up into 5 parts, each named after one of the gods, and each has a specific set of things you can find and/or do in each section. Directly after entering the city from the bridge is Tavril's Plaza. This is the welcome center for Sanctum. An interesting feature immediately noticeable upon entering the city is the giant and dramatic statue of two Messengers of the Vigil posing in what looks like mid combat, swords raised. Between them floats a pure Sourcestone shard, glowing with pure energy. Are the Messengers fighting each other for the Shard? Are they trying to destroy it? Protect it? I really wish I knew! From here you can wander around the central path that meanders through Sanctum, called Bahralt Street. This is where the large statue of the gods is located, as well as the entrance to the Sanctum of the Vigil, the inner keep where all the leaders are and the portal in and out of the city, as well as all the guild vendors/qustgivers/npc's and the like. Tavril's Plaza is also the location of the dimension vendors, just to the left of the steps that lead to the Sanctum of the Vigil.
If you take a left and continue down the steps you can find the banker, guild banker, Weaponsmithing and Artificer trainers, as well as Thedeor's circle, to the North, where all the pvp action is. You can go there to find warfront quests, quartermasters, attack dummies, and other things related to pvp combat. After the pvp area is the Outfitter and Dreamwaver trainers, than the auction house. On the left of the road is also the mount vendors, directly in back of the entrance to the city. You can buy the 2tailed lions and yarnasaurs. There are also guards stationed all over to ask for directions to certain specific NPC's or locations. 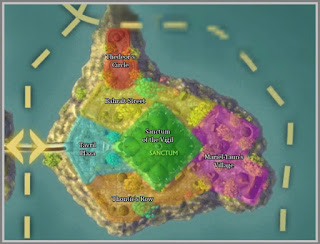 Down the road is Mariel-Taun's village, where you can find the Lodge of the Planes, a tavern, as well as various vendors and NPC's. Of significant note is this where you can find "Poor Tom". He's apparently some kind of bum or vagrant who just wanders the streets of Sanctum wailing about the world has changed from what we remember and that the Magician has done something to alter the timeline. It's pretty interesting and it's probably a given that the Magician refers to Orphiel Farwind, the founder of the Defiant faction and the enemy of the Guardians.
The marriage vendor is also in this section. After that is Thontic's Row, where most of the Auction House NPC's are, as well as more vendors and more banker and guild bank NPC's. When you first enter Sanctum for the first time on a character, you get a tour of the city by finding certain people in each of the sections and talking to them about the history of Sanctum. Here are what these characters say about the city and the Vigil.
Abbess Lila Medows says:
"When the first Ascended Dwarf, Borrin Gammult, was on a pilgrimage north, he witnessed the miracle of this island rising out of the sea. He vowed that he would build a basilica to honor the gods atop it."
Abbot Eldain Diomid, Abbot of Bahralt, says:
"In Bahralt street you will find the finest craftsmen in the world who honor the god of cities by improving their skills. If you ever need anything made, chances are you will find someone here to teach you how or to make it for you."
"When Borrin Gammult discovered this island rising out of the sea, he had a vision of a mighty temple built atop it. He went to the city of Port Scion and recruited the finest craftsmen from the Dwarves, Elves and Mathosians and brought them to this new island to build the Sanctum of the Vigil. They labored for a year and a day to create this most holy of temples. It was during construction of the basilica that tragedy befell Port Scion. The heretical machines of the Defiants that burn the holy sourcestone opened a rift the plane of death. Many who escaped journeyed here to seek sanctuary from the elemental invaders. They named the newly created city Sanctum after the temple built to the Vigil and it has become a shining beacon of peace and strength to all the races who seek to redeem the world from the corruption of the dragons."
Onida Windkeiss, Abbess of Mariel-Taun says:
"The High Elves who marched against the tyrant Aedraxis were consumed by the Shade. Those that stayed behind grieved for their loss. When the Elves returned as immortal Ascended, most rejoiced. Elves are long lived and the loss of so many sundered their faith, who left the covenant in despair and sought to live among men in the cities and villages of the Mathosians and Eth. When the Ascended Elves returned, they called for all Elves who wished to rejoin the covenant with the gods to return to Sanctum. Many settled here in the village outside the basilica. Some Elves felt envious of this new covenant, this new status granted to the Guardian Elves. Led by Prince Hylas, they refused to join us here in the city and instead remain in the ancient Overwatch Keep, fighting their old enemies alone. While the Isle of Sanctum is ours by divine right, the lands beyond are in dispute with House Aelfwar so many pilgrims who make the holy journey to Sanctum fear to leave."
Howakan Farlight, Abbot of Thontic says:
"Sanctum is a holy city of peace and contemplation but if you look closely you will see hints of dark times to come. I think the gods fear for us, their children. That they worry that the challenges we must face are far greater than these paltry invasions we have seen thus far. So test yourself, Ascended, and grow powerful. We will surely need your strength."
Olaf Bladestrom, Abbot of Thedeor says:
"The city of Sanctum is one that promotes peace and faith in the Vigil. But our enemies surround this tiny beacon of hope, seeking to topple the holy temple and end the faith of the Vigil as a means of destroying the Guardian Ascended. We raise an army of devoted crusaders to fight against these elemental invaders and heretical Defiants who seek to undermine our efforts to save this world. The forces of Sanctum are spread throughout the old kingdoms. We have recently sent armies from the Order of the Temple to Gloamwood to deal with the Goblin menace as well as the campaign to free the heartland of Mathosia in Stillmore. The Guardians depend upon Ascended like you to protect the people of Telara from the demons and monsters of the planes and defend the city of Sanctum from invasion." 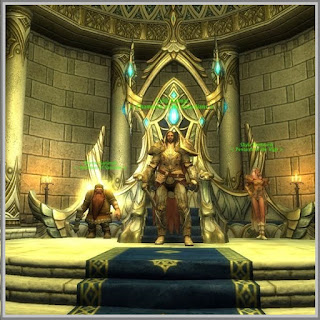 Sanctum is the capital city of the Guardians and is a focal point for Guardians and Vigil worshippers. It is protected by the faith that its citizens have in the gods and is inaccessible by the many cults and riftspawn that scour the rest of the world. The faithful walk the streets in peace and the sanctuary guards keep trouble from the city. Here, Ascended can find the leaders of the Guardian faction: Cyril Kalmer, Shyla Starhearth, Borrin Gammult. It is also the only city that is Guardian only. No Defiant may step foot inside its borders peacefully. It can only be accessed by traveling across a bridge that separates the island from mainland and is watched over by very high level guards and elite Guardian NPC's. While Storm Legion introduced a new city named Tempest Bay that is also a grand capital and is neutral to both factions, Sanctum is still a popular "hang out" spot for Guardian players who are bored, looking for groups, performing various tasks and quests, or RPing in it's streets.


References: Most of the information can easily be found by talking to various NPC's inside the walls of Sanctum itself, or by doing quests for characters who live in the city. It's interesting to note that a lot of High Elves made Sanctum their home, despite their culture being of nomad inclination, and their vow to protect the wild places of Telara. The picture at the top is a concept art pic from Trion's website on Sanctum. When I have time I'll post a map of Sanctum with details on each of the sections and where to find important NPC's.
Posted by Darkwysper at 19:14