Wow, I can't believe it's been a whole year since the last Summerfest already! (Duh, obviously it's been a whole year, Verhysa! Summer only comes once a year, after all). I remember doing last year's awesome Summerfest events and quests and fun stuffs! I also remember all the frustration and irritation lots of peeps were feeling during last year's event. Thankfully, I never experienced any of the problems that a lot of others were facing during 2012's Summerfest, although I do remember having some difficulty with a quest in Moonshade Highlands during Summerfest. I'm pretty sure it was that holiday anyway. But anyway, on with the new stuffs! Speaking about being an entire year...It's been an entire year nearly to the day since I started this blog! Can you believe it!!!??? I started it on July 25th of 2012 and here I am an entire year later and still going strong! I'm so proud of myself for sticking to it, and I'm glad I started this blog because I've learned a lot about Rift and had a lot of fun writing it! I look forward to another whole year of the same! :)
I am a bit late in updating this post, despite having put it up on the day the event came out, mostly because I was dead tired on the 26th and wanted nothing more than to crawl into bed and sleep, and also because I hadn't had a chance to experience anything of this event yet so there wasn't much to write. Now though, I can happily say that I'm eager and ready to have fun during the fest! First thing I noticed when I logged in was that the daily and weekly patron gift thingies have changed to now say "daily/weekly Summerfest patron gifts". Note the Summerfest part of that. I'm still a little confused on the whole patron/credits/rex/loyalty stuff. Actually, I'm dreadfully confused, so I just ignore most of the stuff that I find in my gift box. It doesn't make any sense to me and maybe at some later date when I have time or the inclination, I'll go through my entire bags and my bank and organize everything and figure out what all this stuff that I keep getting from the store is. But in the meantime, onto the actual Summerfest stuffs!
When you log in on the day that the Summerfest event goes live, you get a little note in your mailbox from Shyla Starhearth that goes like this:
" Greetings (name),
Blessings of the Vigil upon you. Through the grace of the gods, the summer season has arrived.
We Guardians celebrate this season in a variety of ways. But by far most popular is the annual scavenger hunts! Come see me in Thontic's Row for more details!" 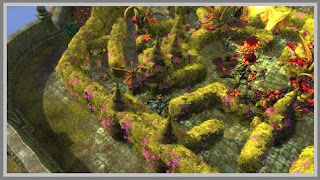 The main attraction though, is the Scavenger Hunt:
Achievements for Summerfest:
There are also a bunch of mini pets to find in the open world of Telara. Here's a list of the ones that I know of. I don't know if there are more or not.

We have various daily quests available in Meridian (and Sanctum if you're Guardian) that have you do all sortsa random things. Even Sylver Valis has joined in all the fun, although it appears he's not too happy about it. It seems he's been forced into coming outside to get a bit of fresh air. Imagine that. Dailies involve making Sunfish Po'boy (Raeslyn's favorite treat but not mine), fishing for summer sunfish near sunfish plants, making sunfish lures-presumably to catch the sunfish with-, and doing a race outside of Meridian. There's also quests available from Sylver, titled "Little Scavenger Hunt Part 1" and "Great Scavenger Hunt Part 1". Obviously there's going to be a Part 2 when the next phase of the event hits. I remember that much from last year. I wonder if I get to do all the same quests all over again the same as last year, or are they varied slightly maybe? Are there different achieves and titles too I wonder?? I think last year I got the title beach bum. I think. Not a very inspiring title, to be sure, but meh. I love titles. I'll go more into detail into the event itself later when it's not 2am and when I don't have to work 12 hours the next day.﻿
Posted by Darkwysper at 01:09