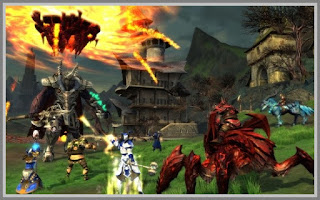 This is a special event that occurs every now and then that grants Ascended of all levels extra rewards when you are in a specific zone on the Mathosian continent. These are the original "vanilla" zones, nothing to do with Storm Legion or Nightmare Tide.
Rewards for this event include:
The Mathosian Mayem event usually ooccurs in the lower lvl zones, so those who are higher lvl can easily mentor down in level and join their fellow Ascended in defending Telara from the invasion of the planes. According to Trion, it's going to harken Telara back to the early days, with frenetic, ever-changing experience that brings players together to fight foes on a massive scale. I wouldn't know, I don't have time to log in right now and check it out. The event will have 4 phases, and will move around in Mathosia through different low lvl zones, starting at the lowest lvl and moving up as the phases change. Each phase will last two days and involve unique objectives, achievements and loot that will also change with the phase. 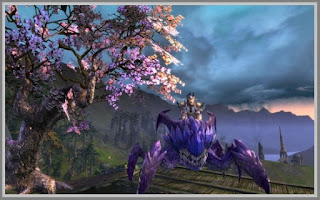 According to the lead designer's letter on Mathosian Mayhem, the idea behind this event was to bring back the feeling that "vanilla" Rift had. If anyone who played back then remembers, the Rifts were crazy out of hand in the beginning. Everywhere you turned there were Zone Events, and most people were so focused on questing and doing other things that they kind of ignored the events. This led to a buildup of planar foes in the zone, which then took it over, destroying towns, quest hubs, NPC's, etc. At times it became so bad that two zone events would piggyback each other in the same zone, creating twice the madness. I remember seeing my zone map being literally lit up with Rifts and other things. Not even joking. It was just a big whirling mass of Planar chaos. While it was incredibly fun and distracting and frantic, it was also quite frustrating if you just intended to log in for a bit and work on your professions, or do a dungeon, or something. You couldn't go anywhere or do anything, because the invasions were so bad. So I kind of like the Mayhem event if it brings back that kind of chaos like they promise! I hope it works like they want. It will give players fun ways and incentives to rejoin friends in early zones and experience one of Rift's hallmark features as it was intended: planar foes as far as the eye can see, hundreds of players at your side and your rift loot bag full to the brim. Of course, my loot bags are always full because I'm a hoarder, so that's not a problem...

This isn't the first Mayhem event that Rift has launched. There were two others as well, but I was too busy with work to log in for those, or mention a blog post about them. The events, as was their intention, allowed players in various states across Telara to shift  focus back to the low lvl zones, allowing noob players and hardcore players alike a chance to join together and beat up some bad guys. This breathed life into the zones and let players experience the one thing that makes Rift unique: it's Rifts. There's even a special incentive to be the first one to complete the quest objectives for the event. The first 20 or so odd players to complete each objective for each of the phases will earn special achievements and awards. And an all new, unique zone event will begin appearing in the final phase and offer an all new set of achievements, titles and a chance at the Hellbug mounts and pets. I think the introduction of the hellbugs is pretty cool. I love watching Defiance so I have no problem seeing it in Rift too. Well that's all I have to say so far on the Mayhem event, since I haven't had a chance to log in and experience it first hand yet.