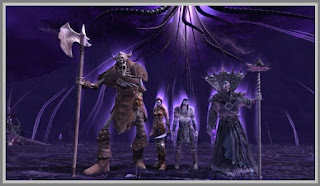 From the purest child to the vilest criminal, the normal reaction to a threat of destruction of one's world inspires fear, hatred, retaliation, even protection. However, there are those who fall outside of these categories, who are so twisted and perverse that the world's destruction would seem a blessing, not a curse, and from among their number come the members of the Endless Court. Promised a place in Regulos's dark realm, they trade breath, flesh, and blood for the lure of power over the undead.
The Endless Court is said to have begun as a collaboration of the forces of two very powerful figures in the time of the Blood Storm who turned to dark magics, first in defense of their home, and then because the promise of that dark power corrupted their minds. The dark mage Alekor Devishnille and the warlord Mar Rilthain. They say that Mar sacrificed his own children on the dark altar to prove his loyalty to his new master and that Alekor slaughtered whole villages to get the components for his dark rituals. They were the first t wear the dark trappings of Regulos, rallying others to work toward Telara's destruction. Their traditions and dark ways were passed down through the generations, even after Regulos had been banished. The Destroyer's followers have never ceased to haunt Telara. They have a been a shadow in courts of history's greatest civilizations, always waiting for the chance to return the world to their patron. Now and then, their dark covens have been rooted out, and everyone always seems so surprised at those that have been caught. Royals, dukes, great scholars, mothers, poor urchins, innocent travelers. All seemingly normal people going about their daily business, but when the cover of night masks all movement, they sneak in the shadows, fulfilling the will of their dark and terrible master. No matter how many times throughout history the cult has been ferreted out, culled, or hunted down, somehow their order always reemerges in time.

Since the cracking of the Ward, the activity of the cultist have increased tenfold. The Endless Court seems to be in a frenzy, driven with new determination to bring as much death and destruction as they can to Telara. Worse, numbers within the cult have swelled with many fresh converts to Regulos's cause, willingly gifting their very souls to feed his insatiable desire for life. Many citizens have given up hope after witnessing the fall of the Mathosian Empire and the spread of darkness across the land.
Everywhere the Endless Court go, corruption and death follows, and the Endless Court go everywhere. Always hungry for Sourcestone, there has been rumors that they have successfully captured Deepstrike Mines, one of the most plentiful mines on Mathosia.

Behind every new machination, every new horrifying scheme and death-filled army of fervent followers, Alsbeth the Discordant is revealed. her plotting and wickedness knows no bounds and indeed, if she is not stopped, her plans to re-animate Aedraxis and return him to the mortal coil as the Avatar of Regulos will be successful.

Regulos promises his followers eternal mastery of undeath, but will he keep his word or devour them whole instead once the world is his at last? Members of his Endless Court must embrace death to become a full member. Not the natural cycle of life, death, and decay, but the void of nihilistic hunger that cannot be filled. There is no room in the Destroyer's army for love or attachments in the mortal coil. In order to ensure this, initiates of the Court must capture and sacrifice the one they love most in the world. Only when love and hope and joy bleed out on the black stone is the Devourer convinced that the initiate is foolish enough to stuff the whole world down a dragon's gullet and jump down after.

The world was yet young when Regulos came to Telara and his cult has festered in the dark places ever since. Mighty Titans, haughty elves, even the humblest of dwarven clerics could fall under the Destroyer's influence. While Aedraxis once led the Endless Court, Regulos's most famous and loyal follower hasn't been since or heard of since he unleashed the Shade on his unsuspecting kingdom. The Endless Court has always been here, a secret, death-worshipping society moving behind the most powerful thrones, corrupting, influencing, planting thoughts of evil and destruction in their wake. When a follower of Regulos dies, his will belongs completely to Regulos and he is re-animated as an undead minion with no will or strength of his own, nothing but a mindless husk to follow in the Destroyer's army.

References: This information is taken from that awesome old site of Rift's that had all the cool info and lore pages on stuff before it was removed, for reasons unknown (to me anyway) and replaced with the new, rather cold-looking site. I'm very saddened by the loss of such awesome and easily-accessible info and I hope maybe someday they will do something like that again!! :) In the meantime, here is the info, written in my own words, but still belonging to Trion and their awesome lore devs!
Posted by Darkwysper at 23:11