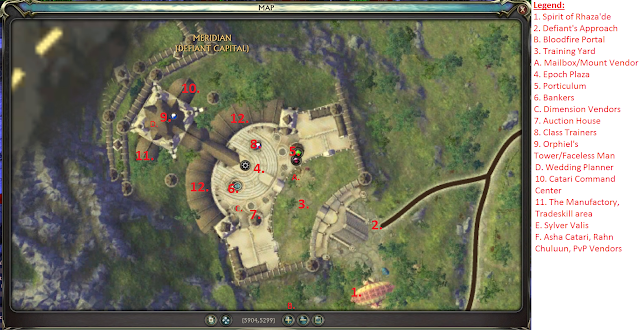 A majestic city located in the heart of Freemarch and backed by imposing mountains, Meridian is the capital and headquarters for the Defiant faction's offensive war against the planar evils that threaten Telara. The main faction and racial leaders for the Defiants can be found here as well. Meridian prides itself on its soaring towers and technomagical constructs as well as a strong sourcestone-fueled defense system that rivals that of the Guardian's holy city. Scholars and scientists are continuously coming up with new experiments and research into the planes is an ongoing project filled with risk, but also great reward. Mortal and Ascended alike call Meridian home. Portals located in the Plaza allow for instant travel to other regions of Telara and there is a wide variety of services offered for the intrepid adventurer, whether they are looking for new and powerful armor, ancient relics and artifacts, or companions in their aid against the many dangers of Telara.
Meridian was built over a conquered Abyssal Cult site, ruled by a high ranking Abyssal cultist named Tidelord Brenin, who captured the position when it was a famous college and library. Meridian the college and learning center had been around for hundreds of years, as long as Quicksilver College in fact. It had been erected by the Mathosians long ago as a holding tower for all the old and ancient forbidden tomes full of powerful spells and instructions of the Ethian magitech that they didn't want to fall into the wrong hands but was just too valuable and potentially powerful to destroy (or so I assume is in there. They don't actually mention what forbidden knowledge is sealed in the tomes). The tower had been taken and converted into an Abyssal nest after spies and traitorous cultists infiltrated the tower, corrupting the scholars and knowledge protectors with temptation to open those forbidden books and read them. Thus the great Telaran Library (who knows what it was actually called) fell under the sway of the Abyssal cult. Tidelord Brenin and Tidelord Faceless Man (since he says he doesn't have a name anymore that's what I'm calling him) were gifted the tower as reward for their efforts in securing it for Akylios. After some time, the Faceless Man "woke up" from the evils that the cult perpetrated and approached Orphiel and his Defiants with the promise of giving them the means to take the nest from the cultists and make it their home, in exchange for amnesty and a position high in the Defiant ranks. Orphiel agreed and together they successfully launched an attack on the Abyssal base, swiftly and violently removing all cultist presence from the area.

After Meridian had been won from the cultists, Tidelord Brenin was able to secretly escape, to later cause more trouble and mayhem in Moonshade Highlands. The successful taking of the cult nest was only made possible by the betrayal of the Faceless man, this ex-cultist oversees the spy and mission network of the Defiants' stratagems now and employs several deadly Ascended assassins and spies such as Kira Thanos the Azul Viper, in his special task force called The Unseen. He and his officers can be found in the central section of the city, in one room of the tower that leads ever upward to Orphiel's Spire. Orphiel himself, the infamous founder of the Defiant and designer of the Failsafe Device, never leaves his tower and can be seen standing at his impressive balcony peering through the largest telescope ever known and muttering strange things. 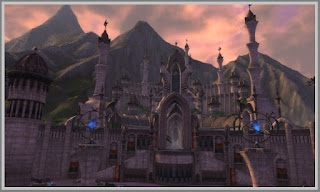 For Defiants, Meridian is a place to call home, a sanctuary from the constant strife and hazards of the wild and evil choked regions of Telara, as well as a place to gather supplies, meet friends, and form guilds to take on challenging foes with. For Guardians, Meridian is a threat, both to their armies in a literal sense, and to their spiritual campaign to free Telara from the corruption that the heretics spread by refusing to relinquish their research into Sourcestone as fuel. Meridian stands as a sore thumb that the Guardians find an aggravating insult to the Vigil, at best. Technology is used freely and openly in the streets of Meridian, experiments and research are performed daily, and sourcestone constructs stalk the stone walkways between the different levels of the city. If one looks closely, one can even see the remnants of the Abyssal's presence in the city; otherworldly weapons carefully sectioned off in the research center, crates of exotic, bright blue Sourcestone canisters that seem to ripple like the plane of Water they were created in.
If you're looking for Sylver Valis and his trusty companion Stavel, enter the left archway in Meridian where the College of Planar Studies diligently works toward further understanding of the Planes and their denizens. Sylver can be found there in the thick of things, trying to perfect the art of engineered Ascended and thus prove himself in this timeline as worthy of the title of inventor. As for Asha Catari, she is located in the opposite direction, on the far right in the Command Center, trying to keep peace among her fellow Defiant commanders: the illustrious High Priestess Anthousa Mona, unspoken leader of the Kelari, and Chieftan Rhan Chuluun, the appointed leader of what is left of the Bahmi tribes. Individually, the three races that comprise the Defiant faction are so different that it would seem they would never trust or tolerate each other for long, but the threat of annihilation and total destruction that the planar forces promise Telara has drawn them all together to save their beloved homeland from eternal darkness and slavery.
Interesting Side Notes:
References: Well, Meridian is definitely an interesting and fun city to learn about, but it's frustratingly mysterious and backstory on it is very hard to come by. For instance, I would love more information on what stood in Meridian's place before it. I heard it was a college first, and had been corrupted by the Abyssal. I would love to hear more on this, or to even have it confirmed. The information behind this post is gained from doing the introduction quests when first entering Meridian, as well as reading the old lore pages that Trion had up on their Rift site and looking over every artifact set related to Meridian that I can find! If anything else relevant becomes known I'll add it in at the end. All lore belongs to Trion and isn't mine. I only play with it!
Posted by Darkwysper at 03:21