The Vigil are a group of five gods/goddesses** who watch over and guide the Guardians, a faction of beings on Telara dedicated to protecting the world and stopping the Blood Storm and the evil of the planes from destroying it. In the beginning of time, before mortals were created, the Vigil were separate beings who created Telara at the nexus of the planes. They were incredibly powerful planar beings known as Bahralt, Tavril, Thedeor, Mariel-Tuan and Thontic. There was also a sixth goddess, named Aia, the goddess of Fate, who broke away from the doctrines of the Vigil soon after Telara was created, for reasons unknown, although it is suspected it is because the Vigil didn't agree with her plans for the universe and her belief that all mortals had to die in order to save everything else. The five gods of the Vigil kept a close eye on their creation, the world of Telara, helping the mortals on it to grow and learn and become civilized.

But when use of Sourcestone as a resource drew the attention of the Blood Storm, an opposing and equally powerful group of gods, the Vigil decreed that Magitech would need to be set aside. This caused a fracture among the mortal races, leaving Telara vulnerable. After a long and bloody war with the Blood Storm gods, the Vigil, with the help of the mortal races of Telara, sealed away the physical and metaphysical presence of the dragons in powerful prisons. Then, to further protect Telara from the influence of the planes and other entities of chaos, the Vigil erected a barrier of powerful magic around the world, cutting off Telara from the planes and providing a playground for their creations to grow and flourish. The Ward seems to have apparently cut off the Vigil from Telara as well, not allowing any direct communication between the gods and their supplicants, which was much different from the time before the Ward, when the gods walked on Telara. Many thousands of years later, the Ward is slowly weakening, allowing powerful enemies to slip through rifts in the dimensions and invade the ripe world of Telara.
The planes are again able to touch the land, converting portions of Telara into pockets of the planes and brining monstrous creatures into being. The weakening of the Ward also had the effect of waking up the dragons of the Blood Storm and weakening their prisons, allowing them to use their metaphysical powers to touch the minds of their followers and to directly or indirectly influence events of the world. Where are the Vigil during all of this? Who knows. They haven't been seen or heard from since the erection of the Ward all those years ago. We only have communication with them through their messengers, winged angelic beings who come to us and impart the Vigil's words of advice and law.
No one knows if the messengers themselves are in communication with the gods or are just following pre-set guidelines and dictates that the gods gave them at the beginning. But no one has been in direct communication or has seen the gods of the Vigil. There are several theories on why that is. Some say that the erection of the Ward caused the Vigil to be severely weakened, to the point where they no longer can protect or commune with those on Telara. Others, such as the Defiant, believe that the Vigil has abandoned Telara to its own devices, having given up on the mortal races and their failings. The Vigil either doesn't care, or can't intervene with the situation Telara now finds itself in. The Guardians are confident that the Vigil will return when the need for them is at its greatest and they will save Telara and protect those who were faithful. Still others believe that the Vigil is dead, or are off fighting other threats to the universe that we on Telara are unaware of as the threat has been neutralized by the Vigil before it even becomes apparent to us.

"The gods of the Vigil are a mystery. Since Telara's creation, they have at times co operated, at others competed, and often work at cross-purposes. Since the Shade War they have joined together as the Vigil to protect the world and guide the Guardians in their holy quest to redeem Telara. Many think that the gods have a greater purpose for us than mere adventuring heroes. The threat of the elementals is great and threatens to overwhelm the kingdoms and city-states of this world, but we mortals defeated and imprisoned the dragons themselves without such a drastic step as creating immortal saints such as yourself. Some whisper that the gods have a much grander plan, one that tests us here on Telara, but will truly challenge us in places and lands yet to come. Sanctum is a holy city of peace and contemplation, but if you look closely, you will see hints of dark times to come. I think the gods fear for us, their children. That they worry that the challenges we must face are far greater than these paltry invasions we have seen. So test yourself, Ascended, and grow powerful. We will surely need your strength." (Said by Howakan Farlight, an Abbot of Thontic in Sanctum). An interesting note on this one is a theory that some players are coming up with in regards to the Vigil and the Ward they erected around Telara. You find out later in the expansions that the founder of the Defiant faction, Orphiel Farwind, is in fact an alien being from another world, calling themselves Tenebreans. It appears that on their world, they enslaved their own gods and used that power to create ships that can travel the galaxies in search of other worlds to strip bare of resources and conquer with their powerful armies. Orphiel was one such Tenebrean sent to Telara to destroy or take over our world (not sure which), and bring back the spoils. Instead, upon coming to Telara, he decided to try and protect it instead. An interesting theory surrounding this, and the Ward erected around Telara is that the Vigil knew about Orphiel and his plans, as well as the rest of the Tenebreans, and so erected the Ward to shield Telara from the gaze of the Tenebreans and also as sort of prison to keep Orphiel on Telara and prevent him from reaching his (space)ship. I actually consider that a really cool theory and I would love if this was the actual way the lore went! Of course, since we still know so little about the backstories of any of the NPC's, as well as the true motivation of the Vigil, or where they even come from, this is still just a theory!

The Vigil was formed out of the need for a stronger being to face off with the Blood Storm, as the gods individually weren't strong enough to hold back the tide of planar force as well as erect the Ward. When they merged together into one force, the Vigil, did they lose their identity? Are they now one entity, consisting of all the qualities and powers of each individual rolled into one? Or are they still separate, thinking and aware beings with their own separate "personalities" and identity? We don't know that either. There is information on the Vigil, but there isn't much known. For instance, what exactly are the Vigil gods? It has been mentioned that they could be Risar. 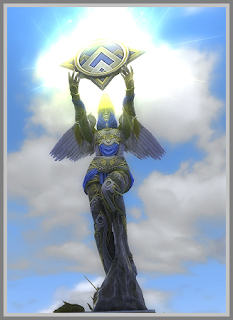 **Also, I'd like to note that in Tempest Bay, the capital city of the Storm Legion area, there is a man holding signs. One of the signs mentions the Fate Goddess Aia (the sixth god, noticeably NOT connected to the "Vigil" council like the others, which incidentally, matches the number of the Blood Storm gods...could the Vigil gods and the Blood Storm gods just be opposite reflections of the same planar coin? *shrug*) and that she, or possibly the Vigil gods, destroyed the transit system (the Infinity Gate) to keep the "Divine War" a secret. What's the Divine War? When did it happen? Who were the forces involved? How come we haven't heard of the 6th goddess before? Why isn't she allied with the others in the Vigil? I'd LOVE to have those questions answered!!!

Other things I've wondered: Have the gods and the Blood Storm ever faced off before, either on different worlds, in their home planes? Is it coincidence that there are six "gods" and six Blood Storm? And what do they even look like?! If I find more information on the Vigil I'll definitely be adding it in here. As of now, I've not even finished the "vanilla Rift" storyline, so I'm not sure about any of the new lore that was introduced in the expansions. I know, I'm so far behind!
A side piece of information concerning the Vigil can be found by completing a Twisted Artifact set called Twisted: Wrath of the Vigil (lvl 50). The description for this artifact set reads "The Vigil makes their displeasure known in a variety of ways. Those with the power to see these warnings of their future wrath would be wise to heed it." And the names of the artifacts required to complete the set are:
A few of these "wrath" artifacts are easy to guess which Vigil member they would be unleashed by, but the others, hmmm I'm not sure...but it's pretty scary what the Vigil is capable of if they feel Telara needs a lesson. I know that Twisted Artifacts are relics from a different dimension, a twisted, alternate version of our Telara, but I always carefully read each one to see if there could be any relevancy to it. This one, I think, seems rather fitting. Thank the gods that even though they are unhappy with the Defiants and their decision to use sourcestone like fuel, they don't believe it's sufficient cause to reign down divine wrath for it!

References: The information for this lore section is easily found by playing through the storyline for Rift. The parts about Aia and the Divine War were taken from a forum thread discussing current events in Rift. You can also find and read the interesting artifact sets. I don't own Rift or it's awesome, but infuriating lore!
Posted by Darkwysper at 02:03