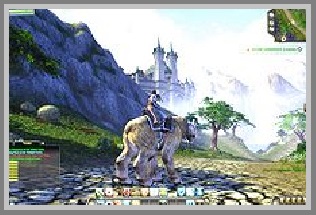 The great and shining city of Port of Scion, as it was at first called, was built long before King Jostir took the throne and years before his two sons fell into civil war. The city was built long after the Mathosian Empire was created as well. A young prince, by the name of Breldan the Fastidious, who was more scholarly and book minded than his older brother King Jornir II, saw that although Caer Mathos, the seat of power of the Mathosian Empire, was indeed a mighty keep, it was strictly militaristic, a feature of the days following the defeat of the Ethian Empire when the lands were harsher and more violent and wars were more common among the peoples. Although Caer Mathos was a great and stalwart beacon to the people of Mathosia, it lacked the refined sense and the sprawling space required for trade agreements, merchants and other such small affairs that ran the kingdom. So Breldan had the idea of building another city, a trade city in an ideal port location that would be able to access all trade routes, cement alliances with far off lands like Ember Isles and Shi-Ming, and would be a focus for scholars, merchants, and simple folk who wanted to gather and discuss mundane matters of the kingdom. When he first brought this plan up to his brother, King Jornir refused the idea of spending so much coin on so elaborate a city that would be located elsewhere, nowhere near Caer Mathos, which was a landlocked city far to the north. Breldan eventually convinced his brother than the coin would be worth it and Port of Scion would more than double the kingdom's revenue, insisting it was the ideal location for trade routes and alliances. The new city would also have the benefit of being a peaceful and neutral ground for gathered dignitaries and diplomats from other tribes and countries. And so, Port of Scion was built. It took decades to finish the city, but when it was completed, it soon became known as the jewel of the west. King Jornir appointed his brother as head of state and leader of the city, which became later shortened to just Port Scion. Forever after that, the younger brother of the king would always sit as head of Port Scion and rule over affairs of trade, while the older brother, who was always the chosen heir, would be king of Mathosia. There would always be a prince in Scion. 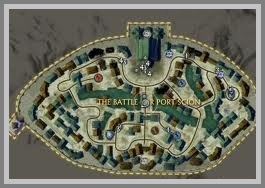 Prince Zareph ruled as a kind of placeholder king after the fall of the Tyrant Aedraxis, holding peace between the Magitech-loving Ethians and the Vigil-worshipping Mathosians and High Elves. He reigned from Port Scion, a port city situated between the northern and southern tribes of humans, designated neutral ground between the capital city of Sanctum and the planar college of Meridian. But Port Scion was betrayed from within by Alsbeth, a mage of the Mathosian court who summoned a massive death rift in the middle of Port Scion to destroy it's unsuspecting citizens. Her goal was to usher in a newly created Avatar of Regulos with Port Scion as the center. Lacking Ascended to stop them (because most were, at the time, with the gods receiving the message of Telara's destruction), the death creatures swarmed the city, corrupting and destroying everything and everyone they came across. They could not be stopped by the weakened city. Protected by her newfound pact with Regulos, Alsbeth watched the destruction with grim satisfaction. When it seemed all was lost, Prince Zareph made the ultimate sacrifice of his royal life to seal the death rift within Port Scion as well as everyone inside. A magical barrier surrounded the city, not allowing any of the plane of death to further taint Telara.

Furious and grief stricken over the loss of their beloved leader, the Mathosians blamed Orphiel Farwind and his Ethian scientists for the fall of Port Scion and swore to see their foul machines and Magitech devices destroyed in the hopes of stopping the madness as well as appeasing the gods.

In the alternate Defiant future, the Ascended did indeed destroy Meridian, the capital city that Orphiel and his followers had established to continue their study of the planes. The powerful Magitech defense system they had in place was destroyed, as well as any hope the Defiant had of stopping the Blood Storm. In exacting vengeance against those they felt had wronged them, the Guardians had doomed Telara. Soon after the destruction of Meridian, the dragons were able to break free of their prisons due to the weakening of the Ward. Since the Guardians were weakened themselves and had destroyed the Defiant machines, they didn't stand a chance against the combined might of the Blood Storm and were crushed. One last bastion of hope remained, a small underground bunker where a few desperate scientists continued their work of creating Ascended. Literally in the final days of Telara, when Regulos had all but devoured the world, the famous scientist Sylver Valis was able to finally discover the key to creating a successfully engineered Ascended made out of planar material and Magitech and fused with souls.

Even though this timeline didn't come to pass, due to the Defiant Ascended being able to use a time traveling device to return to a pivotal point and prevent the Blood Storm from taking over, the fall of Port Scion still remains an important key point in the history of Telara, the point where the fissure between those that followed the commands of the gods and those who wished to harness the power of the planes for their own use had become so wide that the two factions ended up in open warfare, fighting each other as well as the various enemies of Telara. The Guardians followed the Vigil and disdained the Magitech and the misuse of Sourcestone while the Defiant were ever curious and sought to discover the maximum potential of combining magic with technology and who did not have time for gods who were never there when Telara needed them. 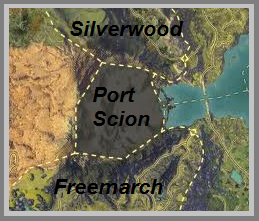 In the proper timeline that we Ascended are involved in now, the Guardians were repelled at the bridge between Silverwood and Freemarch, Founder's Threshold, before they could step foot in what is now Defiant territory; Freemarch. The Defiant blew up the bridge rather than risk having the Guardians destroy all their valuable work. This forever created a rift, both figuratively and literally, between the Guardians and the Defiant. Their differing views, although always at odds, became full out war at this point.
Port Scion still stands between Freemarch and Silverwood, covered in tendrils of death magic and vines. It exudes the stench of evil and corrupts the very air around it. Nothing has gotten in or out since the moment it was sealed. Only time will tell if this will change.

I've also recently found more information on Port Scion located in an artifact set! The Twisted Artifact Set: Districts of Port Scion (lvl 65) from the Nightmare Tide content says "The grand city of Port Scion was so thoroughly destroyed the Endless Court that its districts don't even show up in nightmares." And than it gives a list of names, which I'm assuming are the districts. Freeholm, The Citadel, The Garrison, The Academy, Zareph's Plaza. I'm so excited to have some names of places in the city! Freeholm I'm guessing is probably their Inn or main Tavern. A place for traders and travelers to stay while conducting business. The Citadel is no doubt where Zareph rules and lives, conducting his royal duties and overseeing the smooth running of the city. I'm sure that diplomats and other important emissaries also visit and/or live there. The Garrison is obvious. That's Port Scion's army. The Academy has a magical item as it's icon so it's got to be a school or learning center, for magic perhaps? As well as other scholarly pursuits. Maybe it's a school that both southern tribal people and Vigil worshipping people can come together and learn things without prejudice or suspicion. Zareph's Plaza is no doubt the main plaza in the city, where markets, trade, scholars, merchants, and trainers can gather and discuss business. It's probably located inside the doors, in front of the Citadel, so that Zareph can keep an eye on things.


References: Well there isn't much information on Port Scion out there, but I dug what I could up! The first section is taken from the in game book "The Port of Scion". I'm not sure where I got the book. The rest of the section is written in my own words from quests in game and from information gathered on the forums about Rift lore. If I find out anything else I'll add it in later. Addition: The information at the bottom is gained from Twisted Artifact set Districts of Port Scion and just my theories of what it means. Normally I don't pay much attention to the Twisted Artifact sets, but this one seemed legit.
Posted by Darkwysper at 02:59