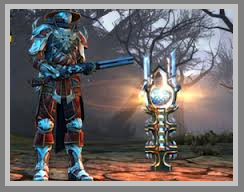 I just finished watching the reveal for the new rogue soul, which I think is called Tactician. Although silly me, I watched it at 5 in the morning so what I put here may or may not be coherent enough to explain it properly. So far, from what I've seen of the Livestream, I can gather that the Tactician(sp?) is going to be a sort of semi ranged rogue soul. It appears to work a lot like a mix between a Saboteur and a Bard. Which is totally okay, I love both. In fact, I love all the souls of all the classes in the game. Strange eh? But anyway, back to the Tactician. It seems to us a lot of technology and less of the blade and bow method. Some new terms and new abilities I noted, including "turrets" "cores" "remotes" and "flamethrowers". Which by the way, makes the one Saboteur in my guild crazy happy...just what we need, a trigger happy bomb specialist with more toys to work with...

The Tactician appears to be able to do healing and damage, and seems to excel in a group setting more than a solo setting, much like the bard. It compliments the Bard also in the way that it is a support class. I'm okay with that. After all, mages have 2 support classes-Archon and Dominator- so it shouldn't matter if rogues have 2. 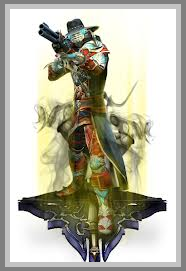 Another thing I noticed was the cosmetics. The armor that Elrar was wearing on his Tactician is darn sexy, wow. *purrs happily*. That is just what I was hoping for in the expansion. That they would expand and branch out on the armor color and design! Cause that armor is fantastic! It reminds me of something from Marvel comics. Pretty neat! And don't even get me started on those mounts! I saw a bear, strange new raptors, the flying pink thing, different horses, all kinds of new things! And I haven't even collected half of the unique mounts in the game yet, darn! My favorite is still going to be just the ordinary black horse though.

The scenery in the Livestream was gorgeous. Amazing! Expansive. Realistic. Everything and more that I'd expect from Rift! Everything just seems soooo....awesome. My fingers itch to explore the new Telara. Which reminds me....is the world Telara, or just the continent we are on now? Hmm, I should have to ask that on the forums at one point.

And lastly, I have to say I was greatly amused by the antics of other players. Apparently the Beta servers are verrrrrry busy and populated. And everyone seems to stick to Elrar's character like a magnet. It was so amusing watching the players zipping after him as if attached by elastic band. He couldn't seem to shake them lol! It was so funny and cute. I would go stir crazy before too long if I was any of the Devs or GM's. Constantly having an audience following your every move is liable to give you either a giant ego or a serious need for therapy and a quite corner. Or perhaps both? *shrug*

All in all, I didn't mind this reveal. It went much better than the last one, which I thought was a complete waste of my time. The Warrior reveal was so disappointing that it makes me mad just thinking about it. And warrior is my favorite class too. Grrr, they totally wasted the entire 40 minutes of Livestream doing stupid pointless things and nattering on about nothing. I'm not sure if that was deliberate or not, but either way it was very annoying. I'm glad they've got their stuff together this time, although they spent a lot of time stumbling over what they wanted to say. I don't know if that was to kill time, or if they didn't actually prepare speeches before hand. Every reveal I've watched so far has seemed like a last minute event that they planned on the way to Subway and hashed together in a tiny study room a half hour before going live. That's what it feels like! Come on Trion, we love you and all, but try to act a bit more serious and professional! That's all I ask.

After watching the live reveal for the rogue, I am very much in love with them. More so than before. And I am super duper off the wall excited for SL. Of course I was before too, but every little snippet I watch makes me thirsty for more! But at the same time, I don't want to see it because I want to be surprised by it! Oh, and since I'm an RPer, I need to figure out how to fit the new souls and the new content into my RP lol! Hmmm, that's going to require some thought and planning. I put so much work and love into my characters, and now they change everything on me! I wonder how RPers in WoW did it? Hmmm....

Ohhh I just can't wait for SL! I want to pre order and get into Beta, but at the same time I don't. Perhaps I could just explore a few low lvl things and check that out instead, and not visit new content? That might work. I'll have to pre order first and I can't do that until next week at the earliest.

Well it's 6:00 in the morning and even though I don't work tomorrow, there is a guild event going on that I'm hosting, as well as I need to clean the apt and do the dishes, as well as do laundry and straighten some things out! Oh and PS: Happy Thanksgiving to those who are Canadian!!!!!
Posted by Darkwysper at 06:10