The High Elves were ruled by Prince Hylas for thousands of years. He and his beloved, Shyla Starhearth, looked after the wilds of Telara, forever in love. Protectors of life, balance, and nature, the High Elves revered their leaders. Those of the noble families and protectors of the Prince became known collectively as House Aelfwar, and answered solely to Prince Hylas. They were his devoted entourage, following him loyally and without question. House Aelfwar was legendary, above reproach. These elves were respectful and reverent of nature and worshiped Tavril gladly. They followed the Covenant and upheld their oaths, even when Tavril joined with the other gods to become the Vigil. 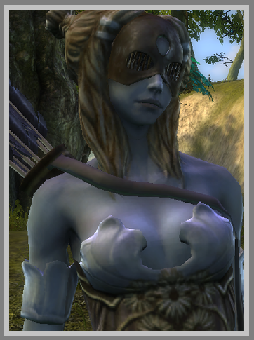 For many, many years, House Aelfwar led the High Elves in prosperity and happiness. And than civil war broke out in the Mathosian Empire. King Aedraxis, the mad tyrant, threatened all that the Elves stood for. He brutally murdered and pillaged his way through his own kingdom, power hungry and eager for destruction. In order to fight him and bring an end to his tyranny, Prince Zareph, Aedraxis's own brother, formed an army of his own. He came to Silverwood and presented an impassioned plea before the High Elf ruling council, begging for aid from his High Elven allies. Hylas refused. He stated that he would not endanger any of the High Elves for a cause that did not concern them. Prince Hylas firmly believed that it was not the Elves' way to interfere in the doings of the other mortal races. But Shyla, his lover, argued against it. She knew that they needed to help Prince Zareph fight off Aedraxis, or a worse evil would befall the land. She believed that when one land suffered, all of Telara suffered. She led the High Elves in a vote. To go and fight alongside the Mathosians against Aedraxis, or to refuse aid and stay in Silverwood until the war was over. Most of the Elves, moved by Shyla's pleas, agreed to go with her to aid Prince Zareph, but those belonging to Prince Hylas, namely the nobles of House Aelfwar, refused. Instead, they chose to stay behind in Silverwood with their liege and watch over the forests of Telara as they'd always done. Shyla pleaded with Hylas to come with her, but he would have none of it. He said he would await their return.

All of the Elves who went with Shyla to fight Aedraxis were slain, but were resurrected as Ascended beings, beyond mortal. They were god-touched, holding power beyond comprehension. When the survivors, after rebirth, came back to Silverwood to greet their loved ones, they found that those who had stayed behind had changed. The atmosphere of the wood itself had changed. Prince Hylas was distant, wary, and suspicious. He wanted nothing to do with Shyla, saying she was an abomination. Shyla was devastated. And then rumors started. About strange music in the wood. About the scent of Fae magic, of strange beings. Hylas and his Aelfwar grew more distant and distrustful, eventually retreating to their fortress of Overwatch Keep. Their devotion to the wilds of Telara had grown out of control. House Aelfwar were now fanatically driven to uphold the laws of nature. They no longer saw reason, believing in survival of the fittest and in the savagery of nature. Shyla tried explaining to Prince Hylas that she was Ascended, blessed by the gods. Blessed by Tavril herself, but this meant nothing to him and to the rest of the House Aelfwar. They had found a new god to worship. One who embodied everything that Hylas imagined the Elves stood for. Nature, at it's most fierce and competitive. The violent, wild heart of the world called to him.

House Aelfwar rejected the gentle and guiding light of Tavril and the Vigil. Instead they found a new god, the bloodthirsty and terrifying Greenscale, of the Blood Storm. Falling into the allure and promise that Greenscale offered, House Aelfwar was forever tarnished, descending into madness. They now seek to tear down civilization and return the world to the wild savage nature, where only those who are strongest survive.

With a new goal in mind, House Aelfwar seek to spread their influence over all of Telara, bringing life rifts into play and destroying any touch of rationalization and order that nature has.

This degeneration into madness started with but a whisper. The Fae Lord Twyl planted the suggestion of a savage world in Prince Hylas's mind. Over time, Hylas's will weakened, and he was overcome by the promise of power. Twyl taught him the mastery of life magic and the commandments of Greenscale. Twyl saw the prince as a simple pawn to be used in his ambitious goal to serve Greenscale, but Prince Hylas saw Twyl only as a useless fool. So over time, Hylas became more powerful and savage, seeking to prove himself the better to Greenscale, and his loyal House Aelfwar followed in his steps, growing more powerful and influential. Soon, they eclipsed the power and hold that the Fae had, and Greenscale watched with approval as House Aelfwar became the prominent order following Greenscale, destroying what remained of the old order, who none even remember the name of any more.

Prince Hylas is indeed a very capable and intelligent leader. With Greenscale's guidance, he has branched out from Silverwood like a ravenous tide, seeking to turn Telara into a savage fight for survival, setting monstrous creatures loose in villages and tearing down outposts where he can. He seeks to bring Telara back to the time of it's wild youth, and to ride at the head of his own savage and wild army like the horned kings of old. The ferocity and speed at which Hylas and his Aelfwar move is horrifying, as is their lack of feeling and compassion.

Where once House Aelfwar was a noble order, the epitome of hope, balance, natural order and tranquility, now they are nothing but savage thugs, mindless in their hunger for the wild, untamed chaos of Greenscale. Their minds have been corrupted, tainted by the savagery of the dragon of the Plane of Life.

References: Most of the information I gathered for this came from http://massively.joystiq.com/2011/08/10/lifes-betrayal-the-lore-of-rifts-house-aelfwar/, which was quite an interesting read! I also remembered quite a few things from doing quests around Telara and what other people have said on the subject. And yes, my character Raeslyn is an Aelfwar. Former Aelfwar, actually. Obviously I bent the lore a little bit for this to happen, but I wanted her to have a bit of a different story then your average Ascended.
Posted by Darkwysper at 02:55