Terminus Zone Summary
I hope the first part of Karazhan's tale was an interesting read. It was often quite tricky to keep the two girls as two separate entities with their own traits, personalities and opinions. Karazhan is from a different culture, has different views on the world, and often has different reactions to things. It took a very long time to actually write up this section of my blog because I kept wanting to redo my character or look over a certain part of the storyline again after I'd already completed it. That's the frustrating part about redoing Terminus or Mathosia. You can't just go back and get more pictures, or re-read some dialogue, because its an instanced zone that you complete. So I have to delete and start over. Not that I mind because each time I do it, I find something else out that I didn't know before, which is really fun. Anyway, here's the summary of the Terminus story. Of course Karazhan's story is far from finished. In fact, it has only just begun, poor girl. Here she was hoping she'd get to rest when she made it to the past. Oh well, it will definitely make for an interesting read later on. Some things that I mention here, both on the summary page and in the actual chapters, will be inconsistent with a newer player's experience upon playing through the storyline due to Trion changing up the starter zones to be more streamlined for new players. A lot of the lore and story bits have been snipped out and replaced with tutorials and such, which I understand but it makes it just that much harder for lorehounds and roleplayers to really immerse themselves into the game or find story in the endless stream of quests. 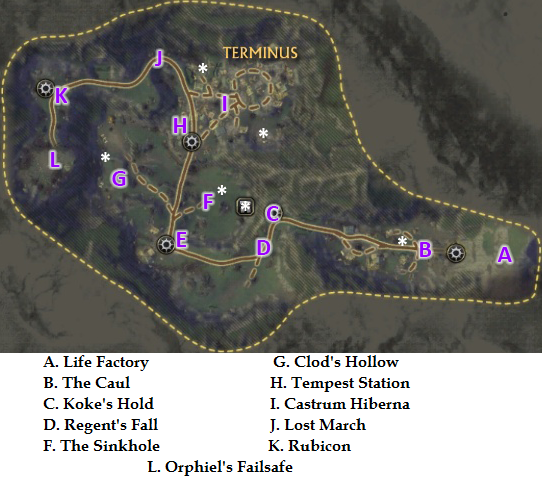 My Opinion of the Zone:
As I went about doing the Defiant starting zone, I made sure to catalog all the neat things I saw, which meant that I gained quite a few more levels than I would normally if I was just wanting to get through the zone. So that's why I stated that the max level of the zone was 9. I'd say the average player would leave the zone around lvl 6-7. Obviously if you really wanted to you could stay for even longer and keep getting more exp, but I was eager to move on to the next area, as the Terminus storyline is only the prologue to a very fascinating book! That's what I love most about Rift and Trion's efforts with it. It's the storyline! Even though it's quite obscure, confusing, and sometimes even backwards, the story IS there, you just have to be adept at looking for it and piecing all the little tidbits together into a greater picture. Which is mostly why I'm even doing this blog!
Well, this starting zone certainly wasn't as engaging as the Mathosia storyline. There were so many interesting little things to discover in the Mathosia starter zone that kept my interest as I investigated and explored. For Terminus, you really had to go out of your way to search for the little gadgets and items. And the rares were very rare indeed. I found only 2 in the many times I was in the zone, and never did I see two in the same session. Also, the theme was darker and more grim and urgent. You definitely got the sense of the world coming to an end in this zone. And that actually lent a realistic flair to the environment that I rather liked. All in all, the zone wasn't that bad to play through and since I prefer the Defiant over the Guardians, I enjoyed myself running through Terminus. I would give the zone a 4/5 because of it's lack of engaging oddities like the Mathosia zone had as well as the removal of specific player race quests that would give a tiny bit of info on each race.


Back to the Prologue
Karazhan's Story Chapter 2 Summary