[Books and Artifacts] V: An Analysis of Goblin Titles and Aliases 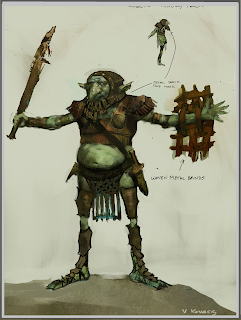 When the original goblin invaders migrated to Telara when the Blood Storm invaded, they walked upon Maelforge's planetouched aura. This maintained their flamebound forms, sustained their life essentially unchanged from how they exist in the fiery lands.
When Maelforge was imprisoned, and the Ward placed Telara into harmony with the planes, most of the invading goblins were dissipated. But a few remained. These underwent what must have been a frightening transformation for them. These creatures of flame and heat were transmuted to flesh and blood, and all the attendant processes that go along with that. This appears to have been the dominant cultural event for the goblins, and not for the better.
Since they gained mortal form they have become obsessed with the functioning of their new fleshy bodies, especially the more unpleasant and violent aspects of it. Spitting and defecating are of interest, but less so than blood, bile and other fluid spilling out of a wound. The more violent the cause of the fluid the more important its event.
Where elves have taken on names of nature that inspires them, and Mathosians keep detailed family genealogies, goblins search endlessly for new bodily fluids to name themselves after, the viler and more disgusting the better.

So in essence, goblins were forced to adapt a "do or die" attitude when it came to survival on Telara. They had been created/born on a different plane of existence, one full of fire and brimstone and molten heat, and now suddenly found themselves bereft, on an alien planet with alien beings. I think if they had been given the chance they MAYBE might have joined the native Telarans in fighting back against the dragon brood like the Shalastiri did, but it seemed that since they had sided with and fought with the enemy dragon, the natives of Telara would never work with or trust the goblins. So instead, they disappeared underground, some quite literally; building cavernous catacombs and chambers, where they could be closer to the heat and oppression of the earth. Maybe it reminded them more of their home plane? They undergone much change in the thousands of years they were trapped on Telara, and became smaller and weaker. When the Ward fell and the planes were once again allowed to intersect with Telara, invasions and expeditions from the planes brought goblins native to the Plane of Fire back. One such tribe of goblins was the Gedlo Conclave, which was a powerful leading tribe in the plane. Seeing how changed and weakened the goblins were on Telara, the Gedlo easily and immediately seized leadership of them, directing them in attacks on Telaran citizens, whipping them into a frenzy that hadn't been seen in quite some time. The goblins, who revere strength and violence and brute force, eagerly welcomed the Gedlo as their new leadership and blindly followed them in their desire to cause as much chaos and destruction as possible on Telara as well as free their master Maelforge.

And here's an artifact set that emphasizes the fact that goblins were once different then what they are now, and were transformed by Telara. I guess that means they are native Telarans now like the rest of us? Kind of how the Shalastiri stayed and were changed into the Bahmi.


References: This is taken directly from a book located in the game of Rift. All information and words belong to Trion, I have no say! The book is a reward for completing the artifact set "An Analysis of Goblin Titles and Aliases"-An analysis by Professor Bedstraw. The artifact information for Gedlo Conclave is from an artifact I found while questing in Gloamwood. I had no idea that the goblins underwent such a drastic change when they were on Telara. I guess during the Age of Dragons they were stuck on Telara after the Ward sealed off the Planes and they had no choice but to adapt or die, and such pure planar beings as how they were would have perished in Telara's post-Ward atmosphere so they needed forms that would survive.
Posted by Darkwysper at 23:37