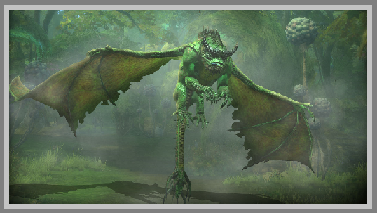 When the Blood Storm came to Telara, the dragon gods each saw in Telara an echo of their own dreams and ambitions for the future. They each secretly planned to remake the world in their own image, taming it and coaxing it into their ultimate home. For Greenscale, this was savage, primal wilderness at its most untamed. He despises civilization and order in any form. There should be no rules, no laws, no hierarchy. There should only be survival of the fittest, only the strongest and most cunning would survive. There is no room for weakness, for vulnerability, or hesitation. Ambition, cunning, swift actions, these are the things Greenscale the Primeval values. During the Age of Dragons, Greenscale was the most familiar and widely known dragon god among the mortals, although that familiarity was one of terror and fear and dread. He would thunder and crash through the many regions of Telara, destroying towns and cities as he went. Whole, savage forests would spring up in his wake. Everywhere he stepped, seedlings of vast and terrible plants and creatures would fall, taking root everywhere. Within days, an entire city would disappear under the massive, flowering vegetation that Greenscale grew. The forests became like an aggressive, invasive force, unstoppable and ever-spreading. Vines and tangled, twisted plants grew at an accelerated rate, choking the life of anything too weak to withstand its advancement. Even the dragon of fire, Maelforge, didn't cause as much wide-spread destruction and devastation as Greenscale did, and thousands perished beneath his mighty green claws, his poison breath, and his rampant desire for battle. It is said that it was in the area now known as the Dendrome that Greenscale first set claw upon Telara, and it is there where the forests grow most wild and chaotic, even today.

Finally, when the mortal races of Telara rallied and banded together to take the Blood Storm down, it was a Dwarven commander by the name of Thorvin Sternhammer and his allies who brought the mighty Greenscale down. Using powerful Death-magic, they were able to seal Greenscale into an impenetrable prison far beneath Stillmore, where his ferocious appetite for all things weak and civilized and soft was contained.

Greenscale, an immensely powerful elemental force from the vast Plane of Life, arrived on Telara with his numerous minions, the Fae, under his command and those of his lieutenant, Fae Lord Twyl. After terrorizing the other continents, Greenscale moved on to the ripe and beautiful Mathosia. When they arrived among the forests of Mathosia, their vast, aggressive power severed the Elves' ties with the natural beasts and flora of the world. That bond has since been repaired, at least in part, due to the efforts of the Ascended in defense of Silverwood, although it is too late for the noble House Aelfwar, who fell into the promises of power and status that Greenscale represented. He revels in the idea of survival of the fittest, and would love to see nothing more than the world forever locked in a bloody struggle to survive, with those who are stronger taking down their former allies and rising to the top, until of course, another, stronger contestant comes along to take them out in turn. A constant, never-ending fight to be the strongest, most powerful being in nature with himself at the top, as he was the strongest. A "There can be only one" mentality. He hates civilization, order and cities. He believes that cities coddle the weak, encouraging weakness and vulnerability, as well as stemming the strength and cunning of those who are strong enough to take what they want.

Imprisoned beneath Stillmore for hundreds of years, Greenscale seethed and plotted, slowly, ever so slowly, reaching out with his aggressive and invasive magic. Where Greenscale is imprisoned today, there once stood an ancient and holy temple. The name has long been forgotten, as well as much of the temple's structure itself, as Greenscale's magic has infiltrated the temple walls, overgrowing the structure with twisted plant life and otherworldly vines and beasts, as Greenscale slowly worked his will upon the land. When the Shade came, Greenscale's power intensified tenfold and he was able to influence and control the lesser creatures from the Plane of Life, influencing them to continue his desires for the world to be his hunting ground. Now the temple where Greenscale lies imprisoned is merely called Greenscale's Blight, forever reminding those who guard it that the dragon god is a blight upon the world, a perversion of the natural order. His powerful Faerie servitors, who had always held the top rank in Greenscale's vicious order, no longer under the thumb of their great and terrible lord, leech his powers from him as he lies imprisoned, fueling their wicked games and tricks with his twisted magic. Greenscale both admires and loathes their treachery, and if ever he is freed, it is unknown whether he would punish them for their transgressions against him, or reward them for their ruthless ability in taking advantage of his imprisonment.

Lured to Greenscale's side by promises of the natural world being returned to what it once was, the noble House of Aelfwar, a highly esteemed order of the High Elves of Silverwood, fell to treachery and now seek to undermine any trappings of civilization they encounter, spreading Greenscale's will and the powerful stink of Life wherever they go. Too much Life power can be just as deadly as any of the other elements, and this is proven by the ability of the Aelfwar to seed an entire forest with new, twisted vines, alien plants, and strange, savage beasts. Why the Aelfwar could stoop so low is a question only they could answer. Through a portal into the Realm of the Fae, Lord Twyl is able to corrupt the sacred forest of Silverwood as well as it's noble Prince, Hylas, all in the name of Greenscale and his desire to destroy all the bastions of order and civilization. Sanctum is one such bastion, a city that Greenscale very eagerly wishes to trample underfoot himself. 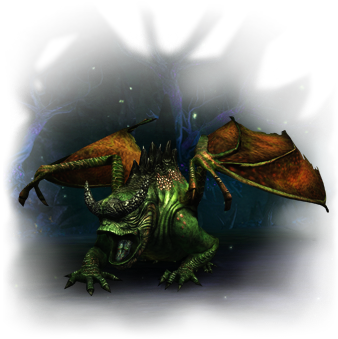 After being routed from Silverwood, Prince Hylas moved to Stillmore, where he prowls the prison's pathways, looking to find a way to unleash his dragon master. His closest allies, the Duke Letareus, a warrior imbued with massive life abilities; the Oracle Aleria, grief stricken and vengeful over the loss of her beloved granitewood trees, with her ability to enhance the beast within every sentient being; as well as the cunning and secretive Infiltrator Johlen, Hylas's spymaster. Each of these followers of Hylas are incredibly loyal, powerful and intelligent and to get past them is no small feat. Anyone who comes seeking to stop Hylas from unleashing Greenscale will have to deal with his underlings first, as well as Hylas himself. And the grounds are no easy walk, filled with traitorous Aelfwar and strange beasts, as well as rows of twisted plants and vines. Greenscale's Blight belongs more to Greenscale now than to those who were charged with guarding the prison.

Approximately a year after the arrival of the Ascended on Telara, a band of brave Ascended ventured deep into Greenscale's prison to slay the beast. The demise of the avatar of life led to the release of dragon Motes, which were later discovered to only appear when the birth of another dragon avatar is imminent. And thus for the first time in a millennium, a new dragon god was born, this time white in color (I've no idea if that is significant or not!) and having a completely different personality than his predecessor Greenscale. Taking on the name Tasuil after circumstances surrounding Atrophinius and his brave corgi knight, this new dragon of the Plane of Life actually ended up on the side of Telara this time, aiding the Ascended on their many missions and adventures

References: this information was taken from Rift Zam, where I read up on the raid, Greenscale's Blight. I also got a lot of info myself from doing the Greenscale Chronicle with Shyla and Atrophinius. All information related to Rift, of course belongs to Trion and I don't claim to own this info! The last paragraph is a spoiler for the later expansions in a tiny sense if you haven't gone through that part of the story yet!
Posted by Darkwysper at 01:09