The dragon of fire and chaos, destruction and mayhem. Maelforge, one of the deadly Blood Storm gods, is not a dragon to be trifled with. He desires turmoil, ruin, misery. Maelforge saw in Telara his own burning desires for a world of torment without end. Destruction, growth, more destruction, new growth, until the cycle repeated itself into eternity. Before coming across the tender world of Telara, Maelforge roamed the cosmos with the other members of the Blood Storm for eons. In his wake he left a scorching, burning void, ahead of his brethren. He desired to tear the cores from burning worlds and eagerly gulp them down like beating hearts. Also called the Flame Sire, Maelforge wanted Telara for his own dark purposes. He heard about the gods of Telara and one, Thedeor, greatly interested him as a worthy challenge for his highly exalted self. He set out to challenge the god Thedeor, but met only mortal opposition instead. After destroying and slaying mortals across Telara, sending them straight to the realm of Regulos, death and decay, Maelforge grew quite frustrated. Not understanding why his challenge wasn't being answered, he sought out the advice of his wiser sister Crucia, who all knew was the most cunning and thoughtful of the dragon gods. She whispered in his ear that the best course of action was to attack Regulos. She told all the siblings this, and watched in amusement as her directions caused distrust, dissention and infighting among the brood. Seeing Crucia watching the dragons tear into each other, Maelforge was furious and attacked her as well. While the Blood Storm was distracted, the Telarans moved in and took them down one by one, while they were distracted and separate. Maelforge was finally defeated and imprisoned in the dreaded Mount Carcera, where he supposedly remains to this day. There is rumor that his cult is mobilizing. They have found where Maelforge lies imprisoned and they are determined to set him free. They work tirelessly day and night to bring his chaos and destruction and burning desires into the world, and their frenzied, burning eyes see the same world as he does, a burning ball of destruction and chaos spinning through the ether, with Maelforge in control.

Alone in the darkness of the volcanic mountain, Maelforge slumbers resentfully, against his will. Forced into this prison by mortal Telarans and their cowardly gods. When he went looking for the war god Thedeor, to fight him for Telara, like Maelforge had done for every world, painting the sky a visceral, burning red while glorying in world-shattering battle, he found naught but mortals to breathe fire on and crumble to ash. Now that he can feel the power of the Rifts, of the Planes intersecting with Telara, he knows that he will soon be free. The burning, the rage, the power, it comes back to his leaden, cold limbs. He will wake, rip his prison asunder, and reign terror and fiery destruction down upon this world. He will destroy Telara's gods for daring to defy him, and destroy his brothers and sisters for daring to fight against him and to manipulate him. Than he, Maelforge will reign supreme over the cosmos, he alone will be the Blood Storm, and he will challenge all of the powerful gods of creation as before, with fiery delight and will roar his triumph and victory across the skies, shaking the stars out of their alignment with his rage and strength.
Maelforge's unholy cult call themselves the Wanton Maw. They have no founder, or hold no records. They thrive on the chaos and fiery destruction that is a part of Maelforge's nature. The Wanton Maw sow death, chaos and destruction across the face of Telara, laying low villages, burning forests, challenging any who they see as the enemy. The prominent force behind the Wanton is the dragonians, humanoid, sentient dragonesque creatures whose hearts are full of fire and chaos. Maelforge is tied to the Plane of Fire, a dimension filled of choking ash and smoke, fire, liquid flame, volcanos, and molten rock. Only creatures of like spirit survive there. Large, scaled, and powerful, Maelforge looks like a traditional dragon. He walks on all four clawed feet, has an incredibly large, alien looking head, and a long, whip like tail. His head is triangular and juts out to a point, filled with razor teeth. He has four horns, two on either side of his jaw. He has incredibly large, bat-like wings that allow him to fly easily. Two formations of molten rock rise up from his back like mini volcanos, constantly spewing lava. Unlike the other Blood Storm members, Maelforge has no interest in your soul, or your mind. He has no wish to control you, force you into slave labor, steal your riches, or to raise you as an animated corpse. He merely wishes for you and all you love to burn until there is nothing left but ash, so that more shall come in your place, stronger than before, only so he can do the same thing again, over and over, for eternity. 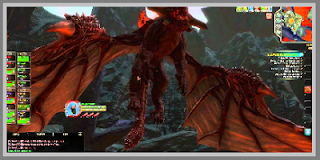 Posted by Darkwysper at 22:20 No comments:

Posted by Darkwysper at 01:09 No comments:

Posted by Darkwysper at 00:04 No comments:

Posted by Darkwysper at 17:01 No comments:

Posted by Darkwysper at 22:17 No comments:

Posted by Darkwysper at 23:39 No comments:

Posted by Darkwysper at 21:35 No comments:

Posted by Darkwysper at 21:30 No comments: