Posted by Darkwysper at 00:47 No comments:


He charged like a wild bull, this once-great priest and scholar, bony spikes sprouting between his knuckles. Anthousa raised two fingers in warding, and her spell deflected his jagged fist. Around them, Kelari clashed in the streets of Atia.


“Kelari blood runs in the gutters because you cling to old, stupid ways!” sneered Karris, a wave of heat from his open palm melting her ward away.


The High Priestess made no sign of discomfort even as the dregs of Karris’s spell singed her eyebrows away. He’d become obscenely powerful; Anthousa had to keep him talking. Anthousa found her most imperious tone, always close at hand. “Kelari blood need not concern you, Karris. All I see is another gibbering Wanton.”


Karris grabbed Anthousa’s throat as a ray of sunlight shot from the end of her staff and into his breast. Maelforge is not the only source of flame. Karris screamed, blood boiling in his veins, and in his agony, hurled her against a wall.


Anthousa slumped like a ragdoll, shards of shattered bone swimming inside her, struggling to whisper healing words as Karris stalked closer.


“Not Kelari, Eminence? Then we shall be Pyrkari, and sear away those who will not kneel to a greater power!”


At once, Anthousa rose into the air over him. Her skirts flickered like candle flame. “You shall be ash and memory. And then only ash.”


“Jace!” Anthousa sat against his chamber door, hands in her lap. “I’m sorry for saying that, but you know Karris can’t be trusted.”


“You’re just mad because you can’t prove him wrong!” cried Jace, loudly pacing within. “He says you want to hold us back!”


Akios fluttered by, the pale white wisp making his usual compassionate twinkling noises. She passed her fingers through his hazy light.


“If we march down Maelforge’s gullet, yes. I want to hold us back from that. If you would only study the spirit paths instead of seeking easy power, you—”


“I DON’T CARE!” Jace yelled, tossing his practice scroll against the door.


“About the spirits? About your people?” Anthousa said. “I know you better—“


She heard him mutter into his pillow: “About you.”


Anthousa hung her head a moment, perhaps for the first time in years, and then rose and smoothed her robes. “Yes, well. Your priorities are your own. Come and eat once you’ve calmed down.”


Anthousa sank to one knee as the next crowd approached. Her fingers burned from the magic. Refugees swarmed toward the docks, weeping and stumbling as they fled the rampaging Pyrkari.


“High Priestess, save your strength. We have other Clerics healing the crowds,” said Thesios, wringing his hands over her.


Anthousa downed a mana potion in gasping gulps, wiping the bright blue trickle from her chin. “None like me.” She immediately began chanting over the next group of huddled Kelari, watching with satisfaction as their wounds closed and their pace quickened toward the boats.


“If the Pyrkari break through our rear guard and find you exhausted…” Thesios said, “Karris nearly killed you last time!”


“And I nearly killed him,” she said, beginning to chant again.


He stepped closer, flashing an ingratiating smile. “Perhaps if we were to reconsider this exodus and stayed to fight? Many Kelari resent you for making them flee.”


She stopped and stared at him, her dark eyes hard as teak. “Many Kelari, or just you? We will leave, Thesios. We will live. Question me again, and you may stay.”


She sat upon her father’s knee, reading from the scroll he held open in one hand. Akios fluttered impatiently about their heads, waiting for her to come play.


“‘…came upon this isle of ancient spirits, who remember the secrets of creation, who are the last embers of truth in the world. So we called our home Ember Isle. We treat with the spirits as friends and equals, and will never again bend the knee, as once we did to Tavril. It is not Kelari ever to kneel.’” The little girl yawned, tugging at her elaborate braid. “Poppa, I’m tiiiired.”


“Momma says I’m too little, that this is stuff for acolytes.”


“Your mother is kind,” he said. “But she fears your destiny. One day, you will be High Priestess. And our people’s hope will rest on your shoulders. And hope is very big and fragile.”


“Well, I’m small but I’m tough!” she declared, immediately throwing herself back into the text.


“And more besides, Anthousa,” her father said.
Posted by Darkwysper at 22:56 No comments:


Knowledge of the Dragons


During the Age of Dragons, there lived a boy who sought knowledge of the Blood Storm. He was a wise boy and knew that if such evil could be stopped, it would be through good intelligence. So he sat in his town’s library, in a tower by the sea, and read every tome and scroll he could find about the dragons. He listened to every rumor, every soldier’s horror story, every old wives’ tale.


The other children mocked the studious boy. They were all eager to win glory in war, to thrust sword and spear into the dragons’ scaly hides. The boy only shook his head sadly and said, “If you think the Blood Storm are just big lizards, I hope you never see what’s under their scales.”


The others fell into sullen silence when the leaders of dragon-hunting parties came to consult the boy about how best to assault the horrible gods. At a young age, he became the foremost authority on the dragons, learning of them one by one: Regulos, Crucia, Maelforge, Laethys, Greenscale…


There Are No Words


Confident in his wits and will, the boy recorded the ravings of madmen. He charted the patterns of the waves, and in his seaside library, he read of the Deep Lord. Of this most perplexing dragon, he learned many useful things:


Akylios covets knowledge, all knowledge. He learned every hideous secret he could and invented many of his own, refusing to forget anything he learned even when his vast mind became full to the outer limits of madness.


When Crucia hollowed out every mind on an invaded world to fill with her own iron will, Akylios gathered the cast-off insides and sucked them up like jellied fruit. Between these feasts, he floated in the cosmos, singing along to the dance of the stars. And the stars who heard him went cold and would sustain no life.


Like all the Blood Storm, Akylios’s true form is an expression of everything he represents, and can best be described as the best way to peel a man is in one long spiral strip, like an apple. So strange did Akylios become that even his cohorts found him unsettling, and his “dragon” form bears little resemblance to anything the sane would imagine.


Like any true devotee of enlightenment, Akylios is sociable with fellow scholars, so by night he would slither up from the sea and coil around the library tower. He would lean in through the window, his chitinous head filling the library behind the boy, hiding his presence with the silence of the crushing deeps. Only when the student closed his book for the night did Akylios lose interest and retract himself from sight.


The boy soon felt the hideous presence behind him, but would not turn around. Though he sensed the dozen eyes reading over his shoulder, he did not turn. Though he heard the Profane murmuring at the very outside edges of his mind, his eyes stayed on the book, even when Akylios would let his awful tongue sway just outside the scholar’s peripheral vision.


And then one night, staying up late to study, the determined boy thought he heard his mother call him down for dinner. Moments later, the townsfolk heard something enormous splash into the water and swim away, and then a scream that would not cease.


All they found in the library was a flayed skeleton, mouth open till the jaw cracked, eyes still in their sockets. They buried it deep, under layers of stone, but people who walk those shores can still hear it scream. To this day, Akylios loves to visit those who study him. But that heavy presence behind them is likely only their imagination.
Posted by Darkwysper at 21:15 No comments:

Storm At Sea!
While I haven't had much time to myself to play Rift or even WoW lately, I have been keeping up with all the updates and announcements going on in Rift and I gotta say, there's lots of cool things that have been happening in this expansion. Here's what's going down this patch! 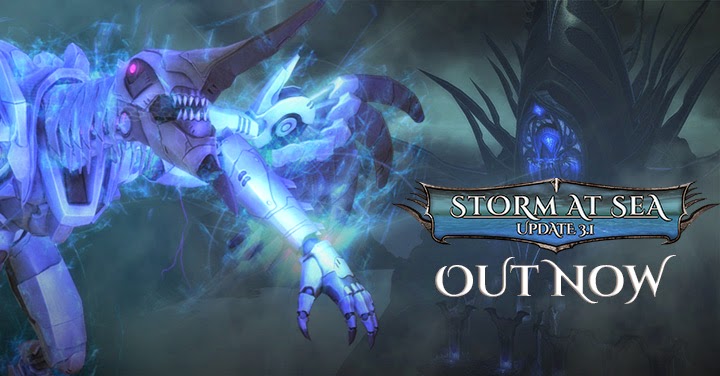 Apparently there's a lost island, shrouded in mist, out there in the Dreaming Sea, waiting for us to discover and conquer it. Also, it appears it's where Crucia has been hanging out lately. I knew we hadn't seen the last of her. She keeps popping up, like a cockroach. Which is ok with me cause I think she's one of the coolest villains in Rift. :)
You have to fight against giant, evil Akvan, all kinds of demigods, spawn of the Plane of Water, and all manner of defenses when assaulting the island, before entering the Tyrant's Throne to battle against Crucia herself.
New Zone: Tyrant's Throne= An island in the Dreaming Sea where Crucia is biding her time to strike back. 5 new story quests and a whole bunch of rewards and achievements await.
Three New Zone Events= The Ravenous Devourer, Leviathan, Aphogglach.
New Nightmare Raid Rift= A new raid rift has been added, 'The Darkest Magic'. Nightmare beings both evil and strange are tearing their way into Draumheim and it's up to the Ascended to put a stop to them before madness takes over.
Tyrant's Forge: New 20 player Raid= In this raid, it looks like Crucia has created a mechanical, large dragon form for herself to use so she can reign over the Planes without anyone being able to stop her. To thwart her plans you have to enter the Tyrant's Forge and put a stop to the completion of her giant mecha. You must fight Johan (I confess I have no idea who this is), Pumpkin (Also no idea), and than Crucia herself in order to gain victory, if you can even make it in time. (Sounds ominous!)
Chronicle: The Rhen of Fate= The results of Finric's decisions if the Ascended hadn't gone to the Plane of Water. A 2 player chronicle mirroring the first sliver of Nightmare Tide.
Planar Attunement Expansion= 3 new additions to Planar Attunement, Dusk, Dust, and Steam (a rather odd choice) that unlock a whole ton of new rewards, including temporary enchants, Nightmare Tide buffs, and a whole bunch of other beneficial new abilities befitting the elements.
New Minions and Capes= A host of new sneaky minions that will challenge players to collect them, as well as a whole bunch of new unique capes for everyone, as well as a bunch of other in game things to be added! As well as new minion updates and added features to make it easier to access and play with the minion screen.
Tons of other updates to both the game UI, character screen, Souls, professions, quest objectives, the looking for group feature, fishing, looting, auction house, and quests! Oh and also dimension UI. Which is always good since the dimensions UI is a bit annoying at times. All kinds of fun new stuff to check out so make sure ya do! And now I'm off to play some Rift myself! Ta!﻿
Posted by Darkwysper at 23:38 No comments: