Discovered and successfully engineered by Orphiel Farwind, the Failsafe Device, as he called it, is a temporal anchor through time with a machine attached to that anchor that would allow a being to travel through time to a different point in the machine's history. The official name of the device is the Distal Temporal Refraction Device. As far as is known, Orphiel never actually mastered time travel, but he was able to create this device which allowed Machineborn Ascended from the future to travel to the past and warn the peoples there of what would happen at the end of days. When asked to explain his device, Orphiel stated that it "confuses time on such a base level that time would rather ignore it completely than attempt to resolve the issue." 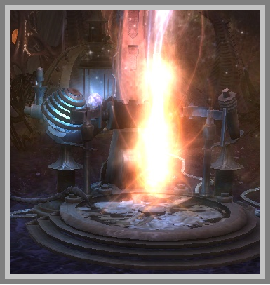 Stavel, Sylver's assistant, runs the actual mechanics of the Failsafe up on the hill before you are confronted by Regulos and use the device. When you speak to him he says "I have prepared Orphiel's Failsafe Device to Sylver's specifications. I've been running tests on the gateway while waiting for your arrival. It should be ready." So originally it was Orphiel's Failsafe, but than he disappeared before the destruction of Meridian. No one knows where. A body could not be found. But they couldn't give up their plans and studies on finding a way to create their own Ascended, so the remaining Defiant scientists went into hiding after Meridian was sacked, bringing their technology and plans with them to protect it from the Guardians and than later, the Blood Storm. Did they pack up and move the Device or leave it where it had been built? I can't say. Maybe they only brought parts of it with them and than reconstructed it after venturing out of the Life Factory in the future, after the world had been all but destroyed. If you ask Stavel "How does Orphiel's Failsafe work?" he will say, "It took us some time to decipher the genius of Orphiel's construction, but the Failsafe is fully functioning. As you may know, all of our data shows that the device can only send you back to the time of its creation. But that should be enough time for you to stop this future from repeating." Curious. That seems to imply that Orphiel never actually left instruction on the Device. Meaning that he hadn't planned on disappearing? He was planning on coming back to that that time and continuing his work? But if he DID use the time machine himself, he would have altered history and would have than ended up in a different timeline, unable to return to the timeline he had originally left behind. That would explain a lot actually of what happened to him and why he wasn't present during the end of Telara. And than also, upon activating the device, Stavel exclaims "Something isn't right! Regulos must be blocking the Temporal Stream!" Curious. Regulos can do that? Can he see the temporal stream? But if he had that kind of power, wouldn't he able to stop the Ascended from slipping through time and preventing his destroying the planet? Although Asha did have him distracted with her assault. It seemed for a few moments that she was evenly matched against him. Of course only for a few moments because in the cut scene after that, he overwhelms and kills her with his own power.

According to citizens who survived the destruction of the world at Regulos's hand, the Failsafe device in the future would bring the Ascended to a point in time just after the Failsafe device had been built, at the beginning. This would be Year 0 in the Rift timeline, as the calendar started over to mark the coming of the Ascended and the arrival of the Rifts. What's strange is that the knowledge collector states a fixed point in time after the machine was created, but the people say TO the point in time of its creation. Do they not know that you can travel to other times? How did these people know where exactly the time machine would send the Ascended? Was there a way to alter your temporal destination? Had others gone to different times in the past, in the testing of the device? I would assume that the device had been tested because leaving it to chance when all hope rested on the Ascended reaching their specific destination seemed rather reckless and irresponsible. It is known that Orphiel succeeded in placing items in the time device and having them appear at a different fixed position in time as long as it happened after the machine had been built. You could always go forward in time but not back because the device had been built in a certain year so any years before that were unreachable unless some other means were discovered. So what impact did these objects have on the study of the device? How was one to determine when the object would appear? How could one determine the correct calculations to each year?

The time machine consists of a few distinct parts, located in different places. There is the Temporal Flux, the Resonance Capacitor, Automata Inflector, and the anchor device, controlled and programed by Sylver Valis, who is Orphiel's assistant when it comes to magitech machines. In the future, at the end of days when Regulos is ready to swoop in and destroy the remaining part of the world, Terminus, the Temporal Flux is located in a cave in the Sinkhole. The Resonance Capacitor is located across from it in a field controlled by Guardian zealots. The Automata Inflector is located in Castrum Hiberna on the right side tucked away behind all the houses down a hill and the actual machine that sends you through time is located up a hill past the Rubicon. In the past, the year the Ascended return to upon using the device, the anchor machine is located in a hill beside the bridge that led to Silverwood while the other parts I'm unsure of.

A knowledge collector located next to the Temporal Flux in the cave says:

"Greetings Ascended, I am an automata designed to recount tales of history." When initiated, it has this to say on the Failsafe Device and the Temporal Flux:
This suggests that the Failsafe Device requires a vast amount of energy and effort to power up and use successfully, which might explain why there seems to be only one Ascended sent through in that timeline. Of course, when you the Ascended travel through the time machine, you are given blueprints to bring back with you so that Defiants in the past can recreate the process of making Machineborn Ascended. That implies that history will be changed since they could than start creating their own Ascended earlier than originally intended. What happens than to the Terminus timeline? Does it collapse? Keep running alongside the timeline that the Ascended find themselves in once they travel to the past? Completely destroyed by a successful and vengeful Regulos? Asha says that you must go through the time machine and make sure this future never happens. So we can assume that the future Terminus doesn't in fact happen after all once we go through time, because we rewrite history itself by appearing in the past. 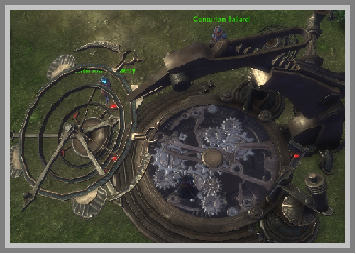 Another odd thing to note. Before Trion changed around the starter zone quests to make it easier and faster to get through the zone, one of the quests was to initiate the Temporal Flux. I am actually quite depressed that they took this quest out of the game. After you initiate the device, power goes through it and a man comes to life on a platform next to the Flux. He is named "Defiant of Old" and says "Regulos, your curse is broken! The Ascended has released me. I shall send your minions back to the foul plane of their ignoble birth". What exactly was a Defiant doing stuck in that machine? Was he stuck in time? Trapped? Perhaps he was one of the test subjects sent through initially while they were testing the Failsafe. If so why did he say that Regulos cursed him? Perhaps while lost in the temporal stream Regulos cursed him? Rather interesting I'd say!

In conclusion, it's rather frustrating that I don't know more about the Failsafe Device! Maybe more information will come to light as I continue through the game. For now, all I have is lots of questions about the subject. And one last note. It seems that Orphiel disappeared sometime before the destruction of Meridian, which implies that it was right after his construction of the device. That leaves us to wonder: Did he use the device himself, untested? If he did, where did he end up? He could only have gone to the future because you can't go past the creation point of the device. While in the future did he find the plans to create Ascended? What else did he discover? By using the device, he would irrevocably altered history yet again and would have changed his own future. The Orphiel that sits in his tower in Meridian might or might not be the same one that created the Failsafe Device. He seems mysteriously quiet about everything and does not associate with anyone else in Meridian, instead he seems focused on a giant telescope. What exactly can he see from that position? Is he mapping constellations and stars? Does that determine the time you can travel to in the device? Who knows, I certainly don't.


References: The information for this lore excerpt can be found in the Terminus zone/the starter zone for the Defiant by reading the little knowledge collectors strewn about the zone. There's actually quite a bit of information there. Also, I recorded quest information from before the changes made to the zone so have a bit more lore than is given to us now.
Posted by Darkwysper at 16:40