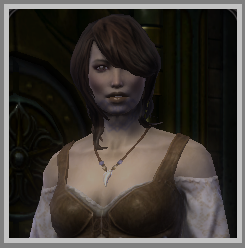 The Mathosians are a clan of northern humans who banded together under prominent family lines such as Kalmar and Mathos, erecting a mighty and far reaching empire in the days following the disastrous fall of the Ethian Empire. The Mathosian tribes were the last humans to leave the sheltering embrace of the High Elven forests and learned much of honor, law, and justice from the High Elves as well as philosophy, spirituality, and art. Eventually, they left the forests of Tavra and ventured north into the harsh mountainous terrain of Telara. The Mathosian "Northmen" were warlike and strong. They battled each other, the Dwarves, and even against the Elves, and became well known for their ferocity and courage in battle. There weren't many who wished to venture into the cold northern regions, for fear of coming across a roving band of tribesmen, who would take any excuse to start a fight. Eventually though, the races sought peace with the warring Northmen. The Dwarves taught them metal and woodwork and the plans for large soaring edifices, and the Elves taught them the wonders of magic and arcane skill.
After the fabled Ethian cities fell to the cultists, the southern tribes fell prey to abominable magics, cultists, and horrifying beasts of the desert, and they sent for aid from the proud Northmen in reclaiming the southern lands back from the dragon cults. The Mathosians, with the aid of the Dwarves, went south and made war with the tyrants and cultists. When the battles had finally been ended, instead of returning to their northern winds and frigid mountains, the Mathosians were given the honor of governing the lawless and chaotic southern lands that had been left bereft of leadership after the fall of the city-states. Any protestors to this were swiftly silenced, and so the Kingdom of Mathos was born, and their first king, Tored Mathos ruled the people with chivalry and fidelity. The kingdom was prosperous and far reaching. It boasted land as far south as what is now known as Freemarch, in which they took much pride. They honored Thedeor, the god of war, with fair battles and duels, as well as skirmishes along the border and great tourneys. For Bahralt, they built great shining cities in his name, free of the taint and corruption of magics and sourcestone machinery, the greatest of which was Port Scion. To honor Tavril, the goddess of nature, they left the forests alone except for the minimum requirement of wood required for progress on the kingdom, and would not plunder the sacred forest of Silverwood. In Thontic's name, they sent merchants far and wide to trade in distant lands, even as far as across the seas to exotic lands such as the famed Shi Ming. And to honor Mariel-Taun, the heart of the gods, they made peace and plenty, filling their cities with light and compassion and music.

Through the centuries, the line of Mathos endured, strong and unbroken in their kingship of all Mathosia. Until the reign of King Jostir Mathos ended suddenly and abruptly. Before his demise, King Jostir named his eldest son and heir, Aedraxis Mathos, as the new king of Mathosia. Due to corruption in the court, and the betrayal of Aedraxis of the faith of his people, the younger brother, Zareph Mathos, then waged a bloody civil war against his brother for the throne. The people of Mathosia, having not known the dark truth of Aedraxis's fall into darkness, had at first sided with the kingdom against Prince Zareph in what became known as the Shade War, the darkest period in Telaran history since the Blood Storm Wars. Eventually, Aedraxis's corruption, brutality, and cruelty, as well as decisions such as lifting the ban on Sourcestone research as fuel, swayed the citizens of the kingdom toward joining Zareph. In a desperate attempt to avoid losing the kingdom to his brother, Aedraxis turned to the famous scientist and heretic, Orphiel Farwind, who had been the brothers' tutor when they were young. Orphiel had extensive knowledge of the ancient Ethian technomancy, including knowledge on magitech weaponry. Promising to provide funding into sourcestone technology as a way to improve every day conditions of life if he created powerful weapons of war, Aedraxis won Orphiel over to his side of the war and ruthlessly employed sourcestone technology against Zareph and his army in a bid to destroy them. In his eagerness, Aedraxis destroyed the Ward around Telara, letting in the planar forces. He called up a massive Death Rift over the battlefield and everyone was slain. But the Vigil sent their Messengers among the fallen and resurrected the heroes of the war as immortal Ascended, the chosen of the gods, and sent them back into battle against the forces of Aedraxis. Soon, the tide was turned and Aedraxis knew he had lost. In a last desperate bid to retain his power, he gave himself body and soul to Regulos the Destroyer, one of the dragon gods of the horrendous Blood Storm invaders. He used unholy magic to further weaken and fracture the Ward and drew a part of the Plane of Death itself into Telara. This event became known as the Shade.

Thousands of lives were lost during the Shade War and the Kingdom of Mathos was sundered, its people scattered and broken and leaderless. The remaining forces retreated to Port Scion to continue waging war against the Endless Court, the cultists who follow Regulos, but were betrayed from within by a noble of the Mathosian court, Alsbeth Rothmann.

When Sanctum became the headquarters for the famous Guardians-those that survived the fall of Port Scion as well as many heroes and adventurers from around Telara who flocked to the city in response to the call for aid-many Mathosians eagerly joined in the effort, voyaging to the shining city that stood out like a beacon from Silverwood. They proclaimed their new allegiance to Cyril Kalmar and the Vigil's Guardians, finding hope and restored faith in this new faction, as well as a chance to redeem their fair kingdom from the dark deeds of Aedraxis.

Despite the tragedy that has befallen their kingdom, the Mathosians stay true to their roots, leading lives of honor and oath. They value justice, hard work, and honest combat, staying humble and pious in their determination to redeem themselves in the eyes of the Vigil for the destruction of the Ward. The Mathosians are a brave and stalwart people, loyal, steadfast and strong. They keep to a strict military code in order to maintain order after the fall of the kingdom. They revere the Vigil and seek to mend the evils done by the Endless Court as well as put a stop to the Blood Storm and the enemies of Telara.