Rift just announced a new expansion coming this fall called Starfall Prophecy! Omg I'm so excited. The title alone makes me excited, it sounds so mysterious and dark and cool and wicked and I'm so excited!! So many fun and amazing things in the upcoming months! Legion for WoW, Starfall Prophecy for Rift, a comic Expo in Sept and BlizzCon in Nov. What more could a gamer girl ask for?? Ok so, here's the lowdown on what I know so far about this new and amazing new expansion!

First off, I bought the deluxe digital version pre-order earlier today, and I instantly claimed a few neat gifts that I'm in love with already! One of them was a beautiful and unique drake mount, the first of its kind in Rift!!!! It's a very pretty albino white with glowing blue eyes and reminds me of the proto-drakes from WoW. It has only 2 legs and runs on those with its front wing-legs held in the air, but when your standing still, it drops down to rest on its front wing-legs. It also leaps into the air and flaps its wings when you jump! I absolutely adore it! I love dragon and drake creatures, and this one definitely catches my eye immediately!! You also get these little items in the game you can redeem for things at a special vendor. 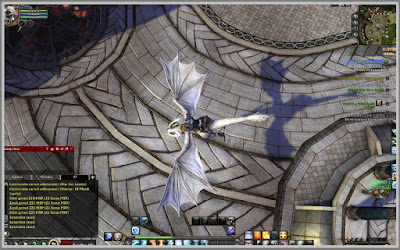 Well that's it so far on the expansion news. The information just came out today, so it's all still relatively new and shiny and unknown! I'll add more info, either to this post, or in a future post about the expansion as I receive it! For now, color me very excited!
~Dark out
Posted by Darkwysper at 00:33