Telara is a unique world, forged by the gods from Sourcestone and located at the nexus of the elemental planes. The creatures that inhabit these planes and interact with Telara are both familiar and exotic.
The Shade rendered much of Telara inaccessible to explorers. The civilized territories are now bordered by impassible mountains on north and west and in the east and south the coasts are battered by churning waves, the sea whipped into a frenzy by planar energy unleashed by the cracking of the Ward. 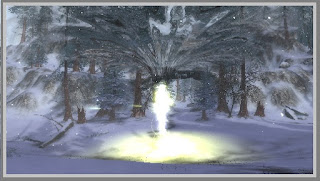 The somewhat smaller continent of Mathosia boasts a wide variety of climates brought about by the ever-changing planar convergences. Within its borders lie ancient forests and haunted swamps, mysterious bogs and snow covered mountains that seem to touch the clouds. It holds skies of crystal blue and thunderstorm gray and deepest sable, all struggling for dominance over a landscape that changes at the drop of a hat with the advent of a planar tear. All of this on just one of Telara's continents, all brought upon by the coming of the Rifts and the cracking of the magical barrier that had always protected the world from the chaotic touches of the planes. The world's other two continents, rife with intrigue, mystery and danger, are as vastly different as night is from day, hosting immense rocky mountains and technological wonders far advanced from that of Mathosia. Many small islands also dot the seas, each one a tiny micro environment with it's own unique wonders and monsters. 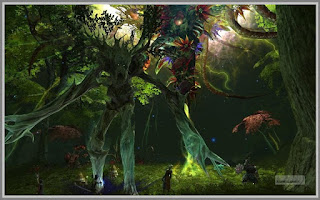 At the time that the Ascended arrive on Telara from their respective timelines (20 years in the past for Guardian and 20 years in the future for Defiant), the Ward that had surrounded Telara for countless years is failing, allowing the various nutjob followers of the Blood Storm to work themselves into a frenzy in renewed efforts to release their masters, knowing that this is the best chance they've had in a long time. This was made possible by the combined efforts of the king of Mathosia and the notorious scientist Orphiel Farwind. Because of their reckless decisions, the planes were finally able to again touch Telara, causing a wave of chaos to ripple across Telara. Once opened, the rifts were a floodgate into Telara, creating new dangers and threats toward the civilized sections of the world. Strange creatures began attacking towns, changing the local climate, and twisting the minds of Telara's native inhabitants. Where rifts form, the sky changes color, the ground is warped until it becomes a mirror of that plane, and all nearby creatures become affected physically and mentally by the energy of the planes. Also, the rifts leave planar residue behind, which is a valuable and powerful resource for Ascended. Is Telara better off without the convergences of the planes or does it need this spark of new life that has been breathed into its atmosphere? Who knows, but it certainly makes living on Telara more hazardous and interesting, each day a different experience.

Apparently there are many worlds out in the universe, but Telara is the only one unique in the fact that is made entirely out of Sourcestone, created at the nexus of the planes. It means this world, above all others, is the most valuable, and is therefore, the most sought after by the various powerful denizens of the planes.

Each region on Telara is full of unique challenges and beings, all waiting for a brave and enterprising adventurer to explore or an Ascended to come and bring aid. And the dragon cults are again active, stirring up old magics, corrupting the innocent and waking ancient horrors in their quest to free their Blood Storm masters from their age-old prisons. Rifts ravage the landscape, some appearing where their element is plentiful, others a surreal contrast to the terrain around them, but all are full of deadly planar creatures with one single goal in mind: to kill all they see and claim this land for their own. This is Telara. But it is also home to many different creatures, sentient or otherwise. And all fight to the last to keep it safe.


References: As always, everything Rift related belongs to Trion! I just read stuff in game and pay attention to all the tiny background tidbits to turn it into Telara's history! Also, there isn't much actual lore on the actual world of Telara as whole. I think you should get on that and write up a little "history of Telara" there Trion! *hint hint* Hehe. :) Oh, and in case you didn't know already, I don't own any of this stuff. It's like writing an essay on a novel already written. I'm just summarizing it in my own words is all!
Posted by Darkwysper at 23:24