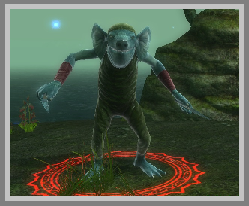 Boglings are a rather odd race of beings that inhabit the marshy places of Telara. They've proven intelligent enough to speak, but rarely do so. They are small, knobby, and quite vicious. They have a crude society that is very insular and they don't venture past the outskirts of the swamp or bog that they make their home in. They are vaguely humanoid in form, but have many characteristics of small rodents like mice.

Boglings are classified as demi-human, which means they lack the awareness and sentience that the humanoid races possess. Perhaps in time they will evolve further. They do wear clothing, to a point. It usually consists of a sack-like full body coat and sometimes shoes. They also make and carry their own weapons, crudely made. Their weapons usually consist of wedges of sharpened stone tied to wood to make knives, or long knobby tree branches as staves.

Boglings originate not from Telara, but rather from the Plane of Life. They migrated to Telara from the rifts in the planes and have adapted to Telara's climate. They are smaller than most of the 6 mortal races of Telara, all except the Dwarves. They have mottled gray, brown and green skin to help them blend into their habitat and outrageously large, rounded ears, similar to a mouse. This is their most recognized feature.

The boglings of Silverwood appear to have a crude religion of sorts. They have religious implements about their homes and even some idols and a sacrificial altar. It was determined by Ascended later that this is actually the boglings' way of worshipping their master, Greenscale, the dragon from the Plane of Life.
Boglings are found in various locations around Telara, not just in Silverwood. They prefer wet, marshy areas and can also be found in Moonshade Highlands. Long ago, when the Blood Storm first invaded and the boglings had first arrived, they were a menace in Moonshade Highlands, sacrificing and worshipping their powerful master, Greenscale, until an elven priestess by the name of Kirna used her influence to shape them into creatures of Tavril. They became peaceable, happy beings that looked to Tavril for guidance and grew special blossoms around the lakes they called home in her honor, which were later named Goddess Blossoms, a plant which still grows today. Unfortunately, when the Ward was weakened, allowing the Blood Storm to again touch the minds of their planar followers, the boglings were but one race that were driven into a frenzy of violence, turning from Tavril and becoming a menace to any unwary traveler along the lake roads, no doubt due to the maddening influence of the Abyssal cult, a group of Telarans dedicated to following and freeing the mad dragon Akylios from his watery prison.

References: This lore post is entirely done with my own research in game. There is no information, or posts on Boglings in the info or lore sections of Rift's website so I kind of had to improvise here. It's easy enough to do though, if you pay attention and read the quests and observe the critters! As always, Rift and its denizens belong to Trion Worlds, not me!! :)
Posted by Darkwysper at 23:38