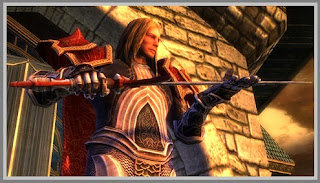 Prince Zareph Mathos, son of late King Jostir the Ancient and Queen Lenia, is a rather important figure in Telaran history. H was born as a twin to his brother Aedraxis Mathos, who was seconds older and thus heir to the kingdom. After Aedraxis was crowned king, Zareph supported his brother and stayed loyal to him, until he heard disturbing reports of unrest, tyranny, and discord within the Mathosian high court. Returning to investigate, he found that Aedraxis was now consorting with dark forces and had gathered all books on death rituals to his side, in order to study the aspect of death. Zareph was horrified and tried pleading with his brother to stop his madness. Soon after, he received a letter from Ardenburgh saying that Aedraxis had set up some kind of macabre ritual scene outside the town gates and appeared to be trying to summon Regulos. Prince Zareph was horrified and quickly went to Thedeor Field, outside Ardenburgh, to stand off against his brother, causing the Mathosian Empire to fall into civil war. Alas, Aedraxis was successful in summoning a death rift onto the field of battle, decimating every living creature on it. Some were outright killed. Others had the misfortune of being slowly turned into shambling ghouls and twisted undead nightmares of their previous selves. None were left alive save Zareph, the sole survivor among the leadership. He retreated to an abandoned abbey located on the premises that night. The next morning, golden light shone through, alerting him to the resurrection of his friends and allies as gods-gifted Ascended, warriors of Telara.
With renewed hope, Zareph continued the battle against Aedraxis, pushing his armies back slowly with the aid of the newly Ascended. Eventually they met Aedraxis in combat at the site of a massive rift into the Plane of Death, where Aedraxis called on Regulos and Carwin Mathos, Zareph's younger half brother, was slain. After Aedraxis and the Shade of Regulos was defeated and most of the Ascended seem to disappear, Prince Zareph took the remaining survivors and founded a port city he called Port Scion, halfway between Silverwood (the main concentration of those who worshipped the Vigil) and Freemarch (where the planar college was and where Orphiel and his people had set up camp after the fiasco with the Mathosian court). It was Zareph's hope to keep the peace between the science loving people of the south and the Vigil worshipping people and elves of the north. He was neutral on Magitech, knowing it had plenty of good use against the planes and against the Plane of Death in particular, as the Ward was weakening by the day and he needed all the power he could get to stem the tide of planar corruption.
And it seemed he was successful. There was a truce among the peoples of Telara, however uneasy, as they fought against the cults and planes. After one such battle, Zareph confiscated a powerful piece of Magitech technology, which he brought back to Port Scion to be studied by the Ethian scientists. His good friend and advisor, the powerful mage Alsbeth, was also interested in the device. She promised Zareph that if given time and material, she would be able to build him such a powerful device that would augment the already strong shields of Port Scion and keep it safe from any threat. Zareph readily agreed. He gave her access to the vaults below Scion that contained powerful artifacts and she took advantage of this to unlock the door to the prison that contained the fragment of the Shade of Regulos that Zareph was keeping safe. Calling upon the power of Regulos, Alsbeth summoned a rift over Scion, which Zareph nobly gave his life to keep sealed inside the doomed city. It's actually not really known if he is in fact, dead, or if he's kept in some kind of stasis or half life, but Zareph is seen later on when Ascended gain access to the River of Souls to put a stop to more of Alsbeth's evil plotting. From her words to Zareph in the River of Souls, it seems that he had romantic inclinations toward Asha Catari, who he grew up with in the Mathosian court along with Alsbeth. It always seemed like Alsbeth was jealous of everything Asha got, even Zareph, and wanted the prince for herself so she could flaunt him in front of Asha and Cyril when they met on the battlefield. But the Ascended (the player) put a stop to that, freeing Zareph. He in turn made another sacrifice, choosing to stay and hold Alsbeth off while the Ascended fled back through the portal to the mortal realm to warn their leaders of what had happened. Zareph mourns that he can't come with and rejoin everyone back on Telara, but he knows he would have no life there, being nothing but a specter, as he had not been Ascended.

Of all the main leaders of the factions, I find Zareph one of the most fascinating, and the most tragic. He just can't seem to catch a break. Hopefully he's happy now in the Soulstream.

References: Holy man on the Shadowlands! (Telara's moon, get it?) It's very hard to find lore information about Rift anymore! Why is that Trion?? Hmmm??? And there's like no info AT ALL on Zareph! The information posted here is taken mostly from the comic, partly from the game, and a large chunk taken from the forums, where a few awesome lorehounds were kind enough to provide me with some details and even a video with info about Zareph!. So a special thank you to Samuraiko, hardy83 and slipmat! You guys are awesome!
Posted by Darkwysper at 17:28