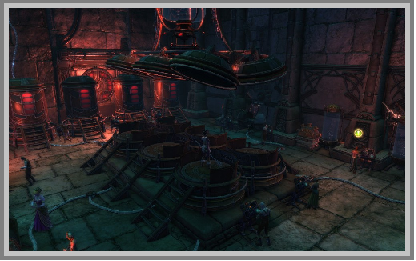 The original Life Factory was uncovered in the 20th year of Prince Zareph's reign near the city of Port Scion. It was built by the Eth city-state of Arkeen and it was used to conduct experiments into the replication, creation, alteration and resurrection of life in all its forms. The Eth had only begun the initial design on the machines they called "resurrection forges", aspiring to return people from the dead with their magitech. Their study became the basis for the experiments we among the Defiant would conduct when we explored their halls many centuries later.
Following the initial discovery of the Life Factory, more were found in the vicinity and we expanded them for our purposes. When the Guardians destroyed Meridian, we shut ourselves within to continue our studies, barring the doors and creating magical fortifications to keep ourselves safe to pursue Project Omega. We have long since lost contact with all other bases. It is our belief that all other such Life Factories have since been destroyed by Regulos in his destruction of Telara. May we find a way to return our lost comrades through Eldritch Technology and put a stop to Telara's destruction.
Resurrection is a relatively simple matter these days. Clerics have long been able to call on their gods or to high spirits to pull souls from the Soulstream, but such beings can be fickle and unresponsive, so the ancient Eth endeavored to create a technological way to bring a person back to life. They were close, but it was not until Orphiel Farwind found their technology many years later and completed the project that we actually saw a machine resurrection. The resurrections were insufficient, however. Of Orphiel's original Defiants, only Asha Catari ever possessed true power. She is said to have stolen some of the power of Regulos himself when she encountered him in the beyond and this explains her un-replicated power. All others were disappointingly mundane and not the equivalent of the Guardians' Ascended. It is only with recent breakthroughs that we have been able to bring back our own true Ascended, reformed with the capacity to hold not one, but many souls, as well as be able to harness the power of the Planes themselves.


References: I found this while exploring the Terminus starting zone and it gives some really interesting info on both Asha and how we Ascended were created! I'm not sure who wrote that bit of info but I believe it was Sylver who spoke the info to me. It can be found by talking to one of the Knowledge Collectors in Terminus! The information does not belong to me and is Trion's work!
Posted by Darkwysper at 14:21