Yay, Patch 2.2 of Rift brings back the Carnival of the Ascended and I'm quite pleased because it was one of my favorite world events! I loved the parades and the games and puzzles as well as the neat cosmetic rewards. Let's see what this patch holds! 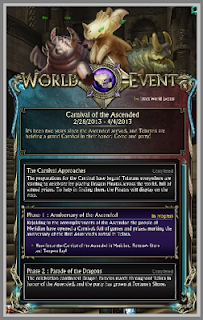 From what I can see, this patch is mostly a filler patch while they (hopefully) work on more content, as there wasn't any new and interesting content added this time! Although I don't really mind as I've been so incredibly busy with real life things that I'd be sad if I missed out on some fun new content because I didn't have the time. Also, the Carnival will no doubt prove quite the successful distraction by itself. The game in Tempest Bay to remember the colors all in a row, for instance, is incredibly fun. I love memory games.
Posted by Darkwysper at 23:09

Email ThisBlogThis!Share to TwitterShare to FacebookShare to Pinterest
Labels: 2.2, Carnival of the Ascended, World Event