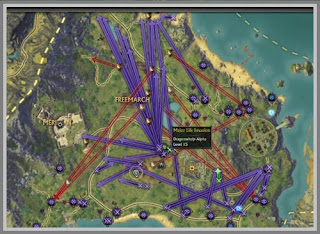 A Zone Event is when a multitude of Rifts open across an entire zone. Usually, a Zone Event is a specific, self contained mission. All details, information, and rewards for the Zone Event will be found on the right hand side, usually near the top unless you changed the UI. It will give the title of the event, the parameters for its completion, and if applicable, a time limit on completing it successfully. As the event progresses, you will be given new stages or missions to complete, getting progressively harder. A Zone Event is usually something completed by many players, not just one or two, as it requires covering a vast amount of land and defending multiple points from planar attack as well as being able to quickly destroy the threat. Zone Events are usually always announced in the chat channels in your chat window, so make sure you keep an eye on the level bracket chat in order to see which Zone Event is going on where, and on which server/shard. You can easily hop onto that server to participate in the event by right clicking your portrait and clicking on Teleport to Shard at or near the bottom of the list! Clicking on the link of the event name in chat will give you the name of the end boss in the event, and you can match it to your achievement list to see if it's a zone event you want or need to gain all the achievements, if that is your goal.

Zone Events are usually pretty straightforward unless they are special story events. You need to close X amount of rifts, kill X amount of planar minions, and defend either 2/4 wardstones from attack. Wardstones are located at major quest hubs around the zone, usually those strange rock formations in the center. If an enemy invader is successful at destroying the wardstone, they will then take over the quest hub and park themselves there, killing any and all NPC's that are in the near vicinity. Once they establish their own foothold there, they can be very hard to kill, especially for the solo player. Proceed with caution on these ones.

After you've completed all the items on the list required to complete the event, there's usually a lot of yelling all across the zone and a big bad appears, usually a lieutenant of one of the dragon gods, or some other prominent follower. They shout and threaten a lot, and than go on a rampage through the countryside, usually until they either encounter a town or an Ascended. Big bads are really challenging, even to higher levels, and have special and unique abilities to watch out for, such as mind control, circles of death that instantly kill you if you step in them. It requires you to be fast and smart about attacking them. This kind of sucks because usually there's a mob of about 20-50 players on top of the boss all trying to get in their kill credit at the same time, which can cause some lag, especially on slower computers. It's a good idea to turn your graphics on low when attacking the boss because of this, if you want to see what he even looks like. The lag can be so bad at times that he just appears invisible on some computers. Usually after you defeat this boss, you will get an achievement, saying you've defeated so and so, of such place. Sometimes you will get a title or something else as a reward for the achievement. 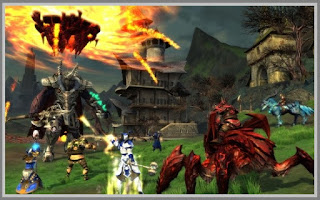 Depending on the zone you completed the event in, you will get a specific type of sourcestone from killing the big bad, as well as quite possibly all manner of in game items. This could include any of the following: mounts, pets, planar essence, weapons, armor, artifacts, crafting goods, World Event loot, quest items, or quirky trinkets that give effects, like a goblet that turns you into a bat for a time. This makes doing Zone Events a really idea if they are in your area. If you are mainly a solo player and a quester like me, Zone Events can be kind of frustrating because they are impossible alone and they kind of take over the zone if left unchecked, which means you can't quest either. So you're kind of stuck until either some other players come to assist, or the zone event eventually ends, saying that you failed to protect Telara and all is lost...which leaves you with a feeling of disappointment and failure. But I guess you can't win them all.

You can tell what level and difficulty a Rift is by hovering over it's icon on the map and mini map. It will be a swirly vortex of doom, usually color coded to the plane it's opened into. It will say what type of Rift, what level of difficulty (Minor or Major), and will also state its level. In higher end zones, you will also encounter elite Rifts, so make sure you keep an eye on whether a Rift is elite or not, as it makes all the difference to survival. Although an Elite Rift will of course contain much more loot.

Now that the boring details are out of the way, I'd like to point out that zone events are actually really cool, really fun, and really intense! Especially the big ones! You can often get snippets of lore and story out of them and you get to fight off epic looking bad guys in a huge zone wide showdown. Often players will group together to take this guy down! I've seen giant dragons that shake the earth, strange demonic elementals, crazed cultists, and even avatars of the Blood Storm. So if a zone event pops up in the zone you're in, make sure you participate! It's pretty cool, and plus, you'll be helping the whole zone out.

Here's a list of Zone Events I've recorded so far. Since I haven't been to any of the new zones yet, I don't have a list of those, but as soon as my character gets there I'll update this list. The list is in ascending order from lowest level zone to highest, until lvl 50, or old world Rift. Storm Legion and Nightmare Tide zones are not included as of yet because I haven't ventured there yet. For a live event tracker that will track which events are going on right now on the live servers, click here: Rift Event Tracker -Note that this is NOT my tracker. It was created by someone else and I do not claim any association with it!


References: If you play the game and pay attention to the announcements of zone events in each of the zones, you can get a feel for patterns and where an event is specific and what triggers it. As for the entire list of Rifts, this is mainly taken off websites that list events, although there isn't much information on them. I'm working that, as I've started recording data related to each of the Rifts I encounter in the game. As Rift get's older, they add in new zone events to spice things up, and I'll make sure I keep the list as current as I can.
Posted by Darkwysper at 20:37