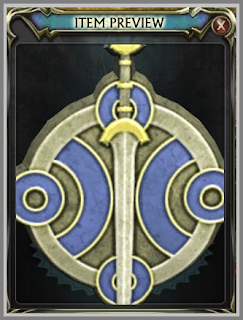 This is the second entry in my Vigil lore pages. I've done Tavril and now I'll move on to Thedeor, god of the sword. Thedeor is the god of righteous war and honorable warriors. He values courage and an adventurer's spirit. If you bring victory, honorably gained, he will give you glory in this world and the next. If you run from a challenge like a coward, or fight dishonorably, you will anger him and woe to anyone who earns great Thedeor's wrath. Before the Vigil was formed to keep Telara safe, Thedeor was the patron god of the Mathosians. He saw in them everything he hoped to find in the mortal realm.

The Mathosians were courageous, honorable, and proud. They lived by the warrior's code and followed Thedeor's ways. He taught them courage and the arts of war. Through his teachings, the Mathosians were able to survive as a people during the Age of Dragons and successfully make a home for themselves in the far north of Telara. In Thedeor's name they forged an empire and ruled it justly for an age. Thedeor carved the mighty mountains, sent the snows and etched valor upon the hearts of every man and woman to help them brave and survive the many dangers and harsh climates of Telara. Thedeor is also known as the god of storms.

Thedeor teaches his followers that the strong must shield the weak until the weak themselves grow strong. He oversees all those that march to combat the threats to our world; the dragons, the elemental invaders, and the heathen Defiant. He bids the Guardians strike down tyrants and heed the counsel of gentler hearts in times of both plenty and strife. The famous and powerful Icewatch of Iron Pine Peaks dedicated their grand library to the god Thedeor, who loves wisdom and knowledge nearly as much as he loves war and combat. Thedeor b
lesses those who follow comrades into danger, who bravely protect those in danger, and those who can have a friendly sparring match before battle. In Sanctum, the Guardians have created just such a ground for sparring, called Thedeor's Circle. There, strong warriors clash, and steel against steel echoes with Thedeor's roaring laughter and every thrum of a bowstring rings in his hears like heavenly music.

Within the Vigil itself, Thedeor makes a perfect balance against the cautious nature of Thontic and the kind and loving heart of Mariel-Taun. He serves as a fine focus and sharp edge to Tavril's unbridled and wild ferocity. Thedeor can be found in the hearts of those who brave the arcane winds of magic, those whose songs banish despair and bolster allies, and those who demand justice and peace among needless conflict and war. Without Thedeor, the Vigil would be honorable and true, but would be unable to find the right path, to be steadfast in the face of horror, to be able to fairly judge those in the wrong and face battle with bravery and courage. The Guardians would lose their righteousness and their unfailing courage. He shares with all the Guardians the glorious and terrifying certainty that their cause is just.

"Thedeor is the sword; combat, warfare and the battlefield. He is struggle, duty, and the glory of triumph over adversity. All who go into battle venerate him for glorious, honorable victory. Stand forth and meet your enemy openly and honorably and he will bless you with righteous victory. Patron deity of the Mathosians, in them he placed his strength and resolve. But all people who fight for a just cause can call on him for guidance and courage. This covenant was broken by Aedraxis the Tyrant who turned from the gods and brought the Rifts to Telara with the heretical machines of the Defiant cowards."
~~Light of Thedeor, Sanctuary

"Be courageous! The faithful need your protection, the enemies of the Vigil deserve your wrath. You are Thedeor's sword."
~~Messenger of Thedeor

"...A letter from Cyril to the Chancel:
Your faith in great Thedeor is well placed, he is the sword of righteousness and the defender of truth. I do not ask you to abandon your faith to the most valiant of gods. I ask that you strengthen it. Those who draw strength from the Sword know the truth of this but dare not speak it: their communion with Thedeor has changed; he is distant, muted. Expand your faith to include the other gods of the Vigil and you will understand. Many have worshipped the gods together as a group throughout history. While different cultures and races would take a single deity as their patron, there was always the veneration of the other gods. A Mathosian Paladin, battle hardened, Chancel trained, would live his life by the code of Thedeor. But making an offering to Bahralt before entering a city or to Thontic before a long journey was commonplace. The five gods are themselves and they are one as the Vigil. As Thedeor as joined the Vigil, so too should your order join the Guardians."
~~"Theology of the Vigil" Book (Artifact reward)

References: By talking to the people in the Sanctuary of Rebirth and the abbots in Sanctum, you can learn a lot about the individual gods of the Vigil. Also, there's interesting little tidbits scattered here and there within the artifact sets and with dimension items. It's pretty scarce though, so I just elaborated on the small points that I found. As always, this information and anything related to Rift belongs to Trion, not me!
Posted by Darkwysper at 11:22